In AC Rebellion, you will build your top-class HQ by building a wide range of rooms; workshop, library, training rooms, treasury, and many more. To unlock these rooms, you will have to increase the Brotherhood level. You increase it by gaining experience; completing the daily objectives is one of the best ways to level up fast in Assassin’s Creed Rebellion game. Additionally, completing the story mode missions, legacy missions, loot missions, standard missions also grant your Brotherhood EXP. As you upgrade your fortress or progress, the game will become hard. And here comes the part of “building the heroes”. The player trains the heroes, promotes the heroes, equip them gears, rank-up skills to make them stronger.

The gameplay is also pretty simple; select a hero for the next room, then tap the gate icon to enter and get to the exit by dodging the obstacles, facing the enemies, and looting the treasure. It also features auto-mode and the speed-up feature that lets you complete the mission automatically. From these missions, you earn EXP, coins, crafting material, codex, and Heroes’ DNA. However, in hard missions, you will have to take care of plenty of things; hero’s role, power, skills, enemies, and more.

HEALING AND THOSE EXPENSIVE POTIONS!

When you send the heroes to the missions, their health will reduce because of enemy attacks. And after the mission, they will take time to heal themselves. You can heal them instantly using the healing potions(you get these potions(medicines) as a reward, by completing the objectives or from the shop in exchange for helix credits or from events). If you have not, then wait until they heal automatically. You can increase the HP regeneration speed by upgrading the living quarters room in the HQ.

To heal instantly – go to the heroes tab -> tap the hero icon-> just below the hero portrait, tap the potion button and choose the medicine.

HOW TO GET HEROES IN ASSASSIN’S CREED REBELLION GAME?

You need DNA fragments to unlock a hero in AC Rebellion. Tap the heroes option at the bottom -> there you can check the complete list of AC Rebellion heroes. Tap on any locked hero -> tap the Find DNA button -> there you can check the source. Usually, you get DNA fragments from the DNA Cube. However, some heroes’ DNA Fragments can also be obtained from the story mode missions, legacy missions. The game gifts you free DNA Cubes daily after every set amount of time in the shop menu.

Or you can also get by using helix credits(earn from objectives, events, missions).

After gaining enough DNA Fragments of a specific hero, it will get unlocked.

You can easily promote common and rare heroes as their drop rate(DNA Fragments) is high as compared to epic and legendary grade heroes.

All the heroes in AC Rebellion have one of these roles(they are specialized): –

How To Promote Heroes In Assassin’s Creed Rebellion?

You can promote the heroes in the ceremony room. If you have enough DNA Fragments for a hero(Required in the promoting process), head to the ceremony room -> tap the + button -> select the hero -> confirm. Promoting a hero will increase its star-level as well as stats, power score+improves skills.

How To Increase The Power Of Heroes In AC Rebellion?

Promoting – Promoting is another one of the best ways of increasing the power score of heroes. Gather the DNA fragments from the cubes or missions and promote the heroes ASAP.

Upgrade these rooms to unlock high-rank gear blueprints. And craft them.

You will be able to build more rooms after unlocking a new wing in AC Rebellion. New Wing unlocks at certain HQ Levels.

1.) Choose The Right Heroes In The Team 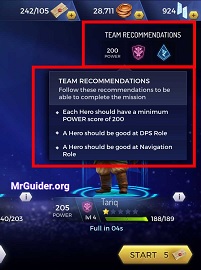 Before you start the missions, take a look at the team recommendations mentioned on the mission preparation screen. It will show you which hero’s role is suitable for this mission and how much power is required to beat the mission. Pay attention to all these recommendations and choose the right heroes in the team.

2.) Choose The Right Hero For The Next Room 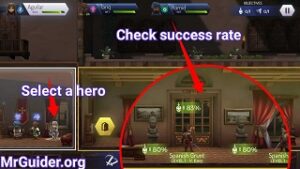 In a mission, you can send one hero out of all to the next room. You should choose wisely, based on the role requirement. For example; the next room has mechanical objects, lockpicks, traps. In this situation, you should choose the hero with disarm role. Simply select the hero and check the failure and success rate. And act accordingly.

3.) Use The Hero’s Skills At The Right Time 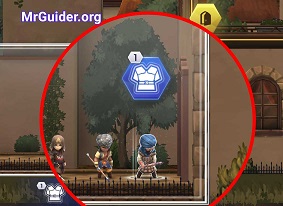 Healers and supporter type characters can restore the health of allies, increase the attack/defense/critical-hit rate stats(buffs). Simply select the hero and tap the skill icon, displayed just above the hero’s head. Long press on the skill icon to get more details.

4.) Get Three Stars In Missions, Then RUSH For Instant Rewards

In standard/loot/legacy missions, try to get three-stars at every stage. This will unlock the rush mode and you will be able to get instant rewards. However, it also reduces the HP of party members.

5.) Participate In The Events

To level up fast, complete all the objectives ASAP. Train the heroes to improve power score. And complete the gear set; weapon, armor, accessory. Upgrade the rooms to get more benefits.

Try the auto-mode(tap the auto button at the bottom-left) if you are having the trouble in choosing wise decisions.

So that’s all for now as Assassin’s Creed Rebellion tips, guide. If you have any tips, share with us in the comment section below. Also, see – Top new Android games