Before we dive into the cheats, tips part, let’s learn the basics first. In Beyblade Burst Rivals, your main objective is to build the best team; you can opt up to three Beyblades(beys), one blader in the team. We will go deep into the Beyblades and Bladers in the guide part below. For now, just keep in mind that Blader’s attributes or skills impact the Beyblade’s performance in the battle. And certain types of Beys have the advantage against the specific type beys. Beyblade Burst Rivals game features a match-3 puzzle RPG gameplay; all you need to do is match the tiles to crush the opponent’s bey in the battle. And there are so many tiles; stamina, skill/tech, burst, and stability. Read the tiles guide to know how it works. Let’s take a look at the walkthrough guide: –

Beyblade Burst Rivals game starts with a tutorial in which you learn the basics of the game; how to match tiles, attack the opponent’s bey, and about the tiles. You start with the training mode which consists of 20 stages. You will unlock all the game modes; daily rivals, tournament, and battle mode after completing these stages. Like other games, you start pleasantly. But as you progress, it becomes difficult. And if you want to earn more Beygems, then you will have to defeat the pro bladers in Daily Rivals game mode. And that would not be easy. Let’s head to the ultimate Beyblade Burst Rivals guide and after it, check out our top Beyblade Burst Rivals tips, cheats & strategy guide to knock out the survivors.

In this part, we will learn about the Beys, Bladers, Tiles, leveling up, upgrades, beygems, beycoins, and much more. Read all the parts to master this Puzzle RPG. 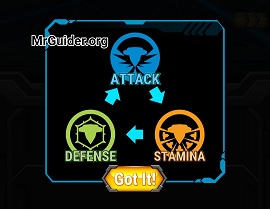 As mentioned above, you can add up to three beys(Beyblades) to the team. And you should all types of Beys in the team to take elemental advantage. There are three types of Beys in Beyblade Burst Rivals game; attack, stamina, balance, and defense.

And when you see this in opposite form, it will be like this: –

In short, to take the advantage, you should choose a strong type Bey against a weak Bey. For example; If the enemy is using Stamina type Bey, then choose attack type Bey to get the advantage. Let’s learn how to get Beys in Beyblade Burst Rivals game.

How To Get Beys In The Game?

You can obtain Beys in the game by opening the loot boxes. You get these boxes in the tournament mode or in the battle mode on certain stages. Or another option is to go to the shop and buy Beyboxes. You can use Beygems to obtain Bey Box. There are many types of Bey boxes available in the shop: Basic, Silver, Gold, attack type, stamina type, balance type, and defense type. We would recommend you to open the basic bey(it’s free) every day and if you have enough Beygems, then open the gold or balance box. After buying the box, go back to the main screen -> head to the loot tab and start the unlock process. Depending on the box’s type(silver, gold, or more), you will get the Bey. Once acquired, go to the team tab. Tap on a Bey(that you want to replace with the new one) and select the newly acquired Bey.

How To Upgrade Beys?

Upgrading the Beys is one of the crucial tasks in the game. By upgrading a Bey, you can increase its attribute; Burst, Stability, and Stamina. There are two types of currencies used in the leveling up; Beycoins and Beygems. Go to the team tab, tap on a bey -> level up. That’s it. You can earn Beycoins by playing the game; battle mode, daily rivals, tournament, repeat the stages, open the loot boxes.

And earn Beygems in the daily rivals mode(best source), battle mode, and from the tournament mode. Since you have limited resources, you should upgrade the best Beys only.

You can sell Beys for Beygems(team -> tap the bey -> sell). Don’t sell a high-rank Bey.

Bladers are the characters who launch the Beyblade in the ring. Their stats also matter a lot. Go to the team tab -> tap the character -> on the next screen, you can check all the bladers you have. Tap on the details button to get information about a specific blader; how much buffs(increase in burst, stamina, stability) he provides. All the characters provide different buffs in the battle. Make sure to recruit the best one to boost the Bey’s performance in the battle. You can obtain bladers from the Blader box. Obtain these boxes from the tournament, from the shop in exchange for Beygems. And like Beys, you can also sell Bladers for Beygems. 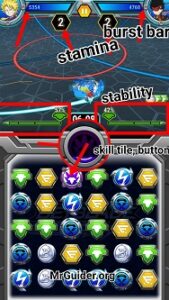 There are three ways to knock out the enemies in Beyblade Burst Rivals game;

To defeat the opponent using the burst finish method, you will have to reduce its Burst power/points to 0. At the top-right corner, you can check the burst bar of the enemy. Its gauge gets reduced whenever you deal damage to the enemy’s Bey. And to deal damage with the burst, match the burst tiles(blue ones, with volt mark). The more burst tiles you match, the more damage a Bey will deal.

The stamina of the Bey reduces as you progress or play the turns. The Bey gets stopped when it reaches 0. Match the stamina tiles(yellow tiles) to keep the Bey’s momentum. Upon reaching the 0 stamina, you will lose the match/round/battle.

1.) Choose The Bey Wisely Before You Start The Battle 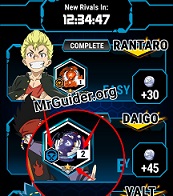 In Beyblade Burst Rivals game, it’s difficult to farm Beygems and Beycoins(you get low amount rewards). Since the amount of these resources are limited, you should spend wisely and only on the worthy Beys(3-stars or higher rank). Don’t upgrade 1* or 2* Beys. You can obtain high-rank Beys from the gold Bey Box(shop -> in exchange for Beygems).

3.) Double The Number Of Rewards

You can double the number of rewards; Beycoins and Beygems by watching the video ad. After getting the victory, on the amount declaration mode, tap the video icon to confirm.

If your Bey has an advantage in the battle, then you will see special tiles(glowing). Match those glowing tiles to get deal bonus damage to the enemy’s Bey.

5.) Pay Attention To All The Tiles

You can lose the match in three ways; ring out, instability, and burst finish. Read the battle guide above to get more details. Make sure to match all the tiles to give a tough battle to the enemy; match burst tiles to deal damage, match stamina tiles to keep the Bey’s momentum, and at last, match the green tiles(stability) to avoid ring out the finish. An enemy may try to push you from a specific end, that’s why you should match all types of tiles.

6.) Use The Bey’s Skill To Deal More Damage

There is another purple tile on the board(skill/special/tech tile). Matching these tiles will fill up the skill button. When it is full, tap it at the start of the turn to unleash the Bey’s skill.

In the shop menu, you can claim the free basic Bey Box by watching a video ad. And in the loot box tab, watch the video ad to unlock the loot boxes fast.

So these are our top Beyblade Burst Rivals cheats, tips & tricks for the beginners. Also, see – Best Match-3 Puzzle RPG games for Android