Infinity Mechs is a top-notch mecha idle game for mobile by SkullStar. Read on for Infinity Mechs tips, cheats, and guide for beginners

First things first – the game has PvE mode as well as PvP mode. In both game modes, you will have to build a lineup of mechas that you want to fight with. At the start of the game, the game gives you low-tier mechas – to check the complete list of mechas in Infinity mechs, tap on the green color drop-down button in the upper-right corner. This will show you a list of menus/options; tap on the book/collection icon to open the mechas and parts wiki list.

This Infinity Mechs guide covers “how to play”, tips for stage progression, rally, squad level, and other aspects such as mechas, tier list, parts, and much more. So, without further ado, let’s get straight to the main content!

At the bottom of the game screen, there are five tabs; quest, mecha, parts, PvP, research, and the store.

(2) Mecha: this tab has two sub-tabs; arrange and mech depot. In the “arrange” tab, you can make upgrades to the mecha that you have deployed to fight the enemies. Scroll down to the bottom of its tab and you will see a + battle deck option that gives you x1 more slot; meaning, you can deploy x1 more mecha to the combat field. It costs gems to buy the slots.

Navigate to the mech depot tab; here you see the list of mechas that you have obtained in the Infinity Mechs game. At the bottom-right of this tab, there are two buttons; arrange fast and disassemble. Arrange Fast – it allows you to make changes to the current mecha line up. You can replace a mecha with another one at any time in the game.  Disassemble – if you have useless mechas in the inventory, you can disassemble them for crystals that you can use in the mech store. Or, you can use them to retrofit mechas.

(3)Parts: This tab has three sub-tabs; equip parts, parts warehouse, and parts store. Players can obtain the mecha parts from the parts store. To buy the parts in the Infinity Mechs game, you will need to have certain materials in a certain quantity. Players can acquire these material items from the boss challenge mode. Like mechas, parts are also available in multiple tier ranks; common tier(grey), uncommon(green), rare(blue), epic(purple), and legendary(red). The higher the tier rank, the more stats and better set stats it grants. Check the parts collection menu to see the complete list of parts available in the Infinity Mechs game.

In the equip parts sub-tank, you can buy more part slots and equip the parts. Navigate to the parts warehouse tab to check the list of parts that you have acquired.

(4) PvP: PvP is one of the main in-game modes in Infinity Mechs where you fight other mechas’ squad created by other players. Each day, you get x5 attempts to challenge players. The victory gives you glory points that you can spend in the honor shop on top-tier mechas or other stuff. Play it daily, climb up in the rankings and you can earn free glory points as well as gems. The higher the rankings, the more rewards you get!

(5) Research: this is the portal where players can spend gems and get the mechas. Mechas are available in three tiers; 5-star tier, 4-star tier, and 3-star tier. The higher the star grade tier, the more worthy the mecha is. Here’s the list of mechas in Infinity Mechs by tier: –

(6) Store: the store has four sub-tabs; mech store – here you can spend crystals obtained by disassembling the mechas. Gem Shop; this shop lists the boosters that you can get by spending the gems or watching the video ads. Specia Pack – IAPs. Premium Shop – IAPs.

(1) Progression: In the Infinity Mechs game, you progress through the stages; each next stage you face, it will have more powerful enemies than the previously cleared stages. At the top-center of the screen, you can check the current stage. As your mechas defeat the enemies, you earn gold coins. Other than that, you earn gold coins from the expeditions/quests.

(2) Upgrades: to earn more gold, upgrade the quests. To get powerful and beat the stages, upgrade the mechas. Also, buy the parts and make upgrades to the part.

(3) Gems: you can earn gems by completing the achievements. Tap the green color button in the upper-right corner -> trophy -> achievement. Other than this method, complete the quests (i) that you see on the bottom-right side of the combat field. Missions; on the left-center, tap on the mission option -> earn free gems by doing the missions. Login reward; log in to the game daily and get free gems. PvP Rankings: based on the ranking, you get gems as a free reward.

(4) Getting Stronger: deploy high-tier mechas(5-star), rank them up, level them up, retrofit. Raise the squad level.

(1) In the Infinity Mechs game, you can acquire supper alloy material by using the rally squad function. S-alloy is required to rank up mechas. 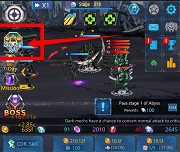 (2) To use the “Rally Squads” function, tap on the mecha squad icon with a 50% buff text on the upper-left side of the screen. This will open the rally squads screen where you can check the rally rewards; you can claim +100% ally by spending the gems. Tap on the “Rally Squads” button or “Claim Extra 100% S-Alloy” button to proceed. 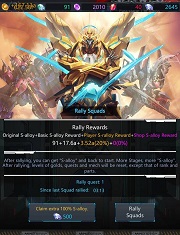 (3) Rally Squads reset the game progress. But it gives you S-Alloy. If you are stuck on a stage, it would be better to use this function and obtain S-alloy.

(1) Your squad level is important; the higher the squad level, the more S-alloy you get from rally squads.

(3) Attack power of mechas increases as you reach the next Squad Level. 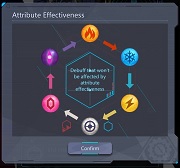 (2) At the top-left of their icons in the mech depot tab or in the arrange tab, or in the battle, you will see the attribute icon; red, blue, yellow, dark, and pink. Or, go to mechapedia collection menu.

(3) Certain mecha elements are strong against certain attributes; like Fire > Ice. You can get attribute advantage if you assign the team wisely. For example – deploying fire mechas against ice mechas.

At the top-center, below the stage number, tap on the commander skill icon to use it. At the start of the game, you have one commander skill; air drop. You can get two more by spending gems. Go to the quest tab -> CDR skill option in the top-left.

Unfortunately, this cheat does not work in Infinity Mechs.

So that’s all we got in this post on Infinity Mechs tips and guide for beginners.