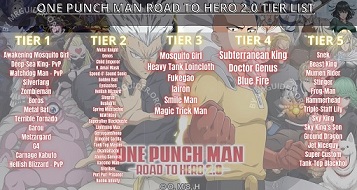 Click here to see the full picture, New characters are yet to be added to the tier list. scroll down to check One Punch Man Road To Hero 2.0 Tier List Details

We have ranked the One Punch Man Road To Hero 2.0 characters in five major tier ranks; Tier 1, Tier 2 Tier, Tier 3, Tier 4, and Tier 5. Rosters in Tier 1 are overall best. In the Tier 2 list, we have listed the top-tier healers, attackers, and tanks. Characters in the Tier 3 list are average. (Tier 1 > 2> 3> 4> 5). Updated with talent skill consideration in mind. New heroes will be added after testing!

New characters will be added to the tier list after testing(it would really help you if you can share reviews in the comments for the new heroes with N/A tier ratings): –

In the Tier 1 list, we are going to showcase the characters that are OP/Best in the game: –

So these are the top-5 characters in One Punch Man Road To Hero 2.0. Now, let’s take a look at Tier 2 characters. which are as good as SSS-tier characters.

This part showcases the One Punch Man Road To Hero 2.0 tier list featuring the Tier #2 characters(These are the top-tier healers, DPS, supporters/buffer, and tank units. The details; skills are shared below. Scroll down to read them).

Supporters and Buffers have skills that help allies during the fights. Healers have healing abilities. Units with group attack skills can unleash AoE damage that affects all foes. Speaking of the tank, they are the front-line commanders with specialties in soaking damage and shielding self/allies)   –

Characters in this tier list part are average; decent enough to clear stages –

Characters in this tier list part are not good or situational – in most battles – they can help you clear the initial stages or in some battles – but, not good in the long run or overall best.

Heroes with no talents are not listed here.

So that’s all in this post on One Punch Man Road To Hero 2.0 Tier List: Top-Tier Characters