Nexon, the creators of MapleStory M, Darkness Rises games has just released a brand new action card battle game for mobile, featuring your favorite Marvel characters such as Spider-Man, Captain America, Iron Man, Hulk, and more. Since the tutorial is not good, it could be difficult for the new players to figure out or understand all the battle mechanics. Let’s not waste any time and head to our Marvel Battle Lines guide and after it, read our top Marvel Battle Lines tips, cheats & strategies to build the best deck of cards.

If you have ever played Tic Toe game, then it would be easy for you to understand the Marvel Battle Lines mechanics. The objective is to defeat the enemy leader and protect your own. Let’s learn about both the parts: – 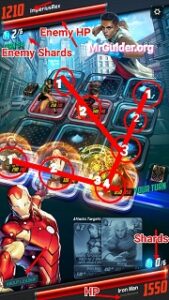 Protecting Your Own Leader

In Marvel Battle Lines game, in order to protect the leader, make sure to pay attention to the enemy’s moves. All you have to do is don’t let the enemy make any line on the board. As you do in tic toe game. There are a number of tactics you can try out to avoid getting hits; summon the character(drag the card from deck and place on the appropriate slot), kill the enemy by targetting it with one of your characters, use the action card.

Action cards are like spells. All the action cards featured in Marvel Battle Lines game have different skills. For example; Sharpshooter’s arrow is an action card that can deal 500-700 damage at level 1.

The player has owned a 12 card deck. Out of 12, only four are displayed on the battle screen. You can switch any specific card and get a new one. Tap the card that you want to replace with a random card, choose the switch option. Note; The obtained card cannot be switched. 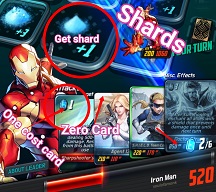 Shard or resource is required to use the card in the battle. You can check the shard cost at the top-left corner of the character’s portrait. If there is no cost, then it means it’s zero shard card. Usually, high-quality or premium cards cost shards. How to obtain? Summon or move the character to shard slot.

You may notice in the battle that the enemy has summoned two characters on the board in a turn. That’s not a buff, it’s character’s skills. For example; There is a character in Marvel Battle Lines, named as Agent Coulson. When you summon him on the board and if prior to it, there is no reserved slot, he will summon a shield agent on the nearby slot.

Similarly, most of the Marvel Battle Lines characters have unique skills. Go to my cards menu or cards collection menu -> tap the character and you will get its details.

You can also check the character’s skills just above the character’s portrait. For example; enhance character(gain HP or ATK power over time), call reinforcement(summons an agent when there is no occupied slot), attack target(attacks the nearby enemy when summoned).

How To Get Characters In Marvel Battle Lines? 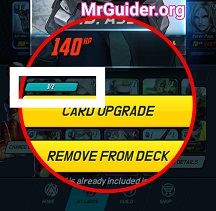 You will need to gather enough number of duplicate cards to upgrade a character. Go to my card menu -> tap the character -> under its portrait, you can check the cards required to level up. If you have, then tap the card upgrade button.

How To Change Leader?

By default, you play as a leader. After completing the tutorial, you will get more leader character; Iron Man. To change the leader, head to My Card menu. On the bottom-left side, tap the change leader button and select the desired one.

How To Win Battles?

Reduce the enemy’s leader HP to 0 by completing the lines.

To unleash the power of premium cards, you will need to summon them on the board and it will cost you shards. And in order to collect the shards, you have to move or summon the characters on the shard slot. Since you can not summon the premium cards without shards, it would be better to include the zero shard cards in your deck. And it would be even better if you put zero shard action cards too. We would recommend you to add at least three 0 shard cards in your deck.

2.) Play As You Are Playing Tic Toe Game

As mentioned in the skill guide above, all the characters have different skills. If you are still unfamiliar with the character’s ability, then head to the card collection menu(there you can check the complete list of characters you have) -> tap the character and on its portrait, you can read the skill details.

In the special ops mode, you fight against a unique leader in each battle. Complete all the objectives to get three stars. You can use instant clear tickets or auto-clear tickets to claim the rewards instantly on the stages where you have earned three-stars. How to obtain? Complete the daily missions.

If you are out of gold, then play the trials simulations mode. In this mode, you battle against five characters daily.

5.) Spend In-Game Currency In The Shop

As you move higher in the arena mode or in campaign mode, you will need premium cards or upgraded cards. You can spend gold, special ops points, trials mode points in the shop for extra premium cards. And use the premium in-game currency gems/diamonds for premium card packs.

Additionally, in the shop section, you can claim free gold, single card pack every day.

6.) Get Premium Character Cards For Free

Another way of obtaining the premium character cards in Marvel Battle Lines is by participating in the events. For example; there is an event going on; the 7-day check-in challenge. By logging in or checking-in daily for seven days, you get the Spider-Man Leader. You can check all the events in the event portal menu.

You can create your own guild at the player level 15 or join an existing game. Go to the guide menu -> there you get all the guild related options.

8.) Complete The Daily Missions To Level Up Fast

From every game mode, you earn EXP-Experience points. These points are needed to level up. If you want to level up fast, then complete all the daily missions asap as completing these missions reward you a great amount of EXP.

So these are our top Marvel Battle Lines tips, tricks & a strategy guide for the beginners. Also, see – Top new Android games of this week