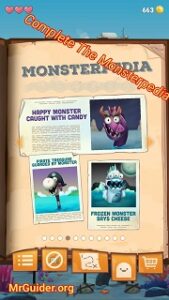 In Monster Fishing Legends game, you play as a monster hunter whose duty is to uncover the mysteries behind sea monsters. You help him(yourself ?) in completing the monsterpedia by catching all the monsters featured in Monster Fishing Legends game. But it would not be easy as it’s a very challenging task. These monsters are roaming deep in the ocean and there is only one way to catch them. “Using the Bait”. You attract the sea monster up by throwing the trap(bait) in the ocean. As the monster eat more and more baits, it will reach the top of the ocean surface. Since you are sending only baits over and over again, and Monster is eating too. At last, you play a bad trick with the monster; instead of the bait, this time, it’s only a hook to pull the monster up. And at the end, you take a picture of the Monster.

You have three lives. If you failed three times, then you will have to wait for about 20 minutes. In Monster Fishing Legends game, coins are used in getting baits, restoring the lives instantly. You earn coins by playing the game; catch the monsters, open the chests. So this is the basic Monster Fishing Legends guide for the beginners. Now, let’s take a look at top tips, cheats & tricks to catch the sea monsters.

1.) You Have To Target The Center Of The Circle 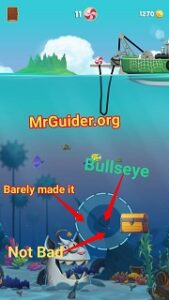 As you know, the monster eats the candy if it(bait/candy) is in the circle area. The circle has three zones; barely made it(3rd zone), not bad(2nd zone), and bullseye(center). In initial levels, it is very easy to catch the monsters even if you place the trap in the 3rd zone of the circle. But later, this will not work. In each turn, you lose a bait. At the top of the gameplay screen, you can check the number of baits you have. And as the monster eats, the circle goes up. Your objective is to attract the monster to the top. Since you have limited candies and the monster is at the bottom, the only way to pull it up fast is by targetting the center of the circle. On the other hand, if you are placing the traps in the 3rd zone or 2nd zone, the monster will come up, but very slow. And at last, you will end up with 0 candies. And in the later stages, the monster would not even reach the middle of the ocean. That’s why always target the center.

2.) Watch Out The Flow and Speed Of The Water 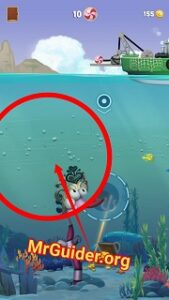 You have limited lives(three lives in total). If you fail to catch the monster, then the game will offer you more baits for coins. Ignoring the offer will reduce one life. And after losing all, you would not be able to play it until next life. We would recommend you to not to buy bait(in early levels). Instead of it, you can use coins to restore the lives and get the chance again to catch the monster. Note: – We would recommend you to save coins. In hard stages, you will need a lot.

It is obvious that in the later stages, you will not be able to catch the monster with the amount of bait the game provides to you. And at the end, you will have to spend hundreds of coins to move on. And one of the best ways to earn more coins in Monster Fishing Legends game is by repeating the old stages.

5.) Grab Free Offers To Fill Up The Treasure

Sometimes, the game offers you to restore the lives by watching the video ad and double the number of coins you get by catching the monster by watching a short video ad. Make sure to grab these offers and fill up the treasure; lives and coins.

On the world map, at the bottom-right corner, tap the chest icon to claim the reward. You can open this chest after a certain amount of time. It contains hundreds of coins. So don’t forget to claim it.

So these are our top Monster Fishing Legends cheats, tips & a strategy guide for the beginners. Do you love fishing games? Check out – Best fishing games for Android 2018