DAERISOFT, the creators behind Life is a Game, has published a challenging Idle RPG, named as MY Little Fantasy – Healing RPG. In the game, you will recruit the allies, fight against the hordes of enemies with a top class weapon, armor, and accessory. After clearing a set of stages, you will battle with the stage boss who has a treasure chest. Defeating the boss will reward the chest, contains EXP, gears. If you are having the trouble understanding its mechanics or looking for tips to clear every stage, then today’s MY Little Fantasy guide and MY Little Fantasy tips, cheats & strategies will help you.

1.) The Basics – Up to two characters; one hero and one ally can engage in the combat and fight against the enemies. They attack the enemies automatically, but you can increase the attack speed by tapping the battle screen. Additionally, you can equip multiple weapons. All the weapons have a unique active skill which you can activate by tapping its icon. The hero will gain EXP by defeating the enemies in the battle; just above the hero level, you can check the EXP bar. As you kill the enemies, this bar’s gauge will increase and once it fills up completely, the hero’s level will increase.

3.) Recall – Recall is the most important feature in MY Little Fantasy game. If you use this feature, the game will send you to stage 1. In short, you will have to start the game again from the beginning. But the benefit is it will gift soul stones. Soul stone is one of the premium in-game items. You can use it to increase the rank of the hero, ally.

So that’s the MY Little Fantasy basics. Let’s learn step-by-step:-

Allies Guide – MY Little Fantasy – Healing RPG – How To Get?, Use? 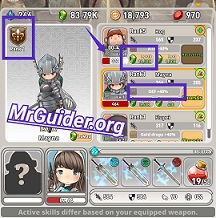 Allies help you in the combat by dealing damage to the enemies. That’s it? Not! All the allies have different passive skills; For example – Hog can increase the ATK by 40%, Flupei increases the gold drop rate by 40%, Mayna increases the DEF by 40%. Additionally, you can send the allies on the quests, activate them as the support. You can increase their power by leveling up, ranking up. Let’s learn about all!

How To Get Allies?

You can obtain allies by spending gold and rubies. However, certain heroes are unlocked once you clear a specific stage. At the top-right corner, tap the shop icon -> go to the ally tab -> there you can spend gold, rubies to obtain allies.

All the allies belong to one of these grades; C(Common), B(Uncommon), A(Rare), S(Epic), SS(Legendary). At the bottom-left corner of ally’s icon, you can check the grade.

If you have more than two allies, then you may want to switch on the basis of their passive skill. Tap the ally icon at the bottom-left corner of the screen -> there you can see the list of available allies. Tap the deploy button to enroll him/her in the combat.

HP Regeneration – HP of the allies regenerate over time. All you need to do is give them rest; deploy another ally. After it, the health will recover over time.

How To Level Up And Rank Up Allies In MY Little Fantasy – Healing RPG?

Tap the ally icon -> tap the level up button. To rank up, select that ally -> tap the rank option at the top-left of its portrait -> tap the transfer button.

How To Equip Gears?

Tap the hero icon to open the inventory. There you can see all the gears you have obtained so far. You can equip three weapons, one armor, and one accessory item. Tap the weapon -> equip -> choose the slot. Tap the armor/accessory -> equip.

How To Get Gears?

How To Upgrade The Gears?

You need Force Scrolls to upgrade the gears. These scrolls can be obtained by defeating the enemies in the combat or from the shop, in exchange for silver coins, gold coins.

Tap the hero -> select the scroll -> use -> select the gear for upgrade -> hit the strengthen button. It will cost you gold. The cost will increase as you level up.

How To Synthese Gears?

Once you level up a gear(armor or weapon) to level 20, you will be able to synthesize. In this process, you merge two weapons/armors(level 20) to get a high-grade weapon/armor.

Ranking up the main hero significantly boosts the stats; Max HP, ATK, DEF. To rank up the main hero, you need soul stones. You can obtain these stones by using the recall feature.

You will get the rank points when you rank up the main hero. Use these points to increase the ATK, DEF, and Max HP. On the hero screen -> under the stats section, you have these options.

You need party EXP to increase the party level. Party EXP can be obtained by defeating the boss in boss battles. At the top-left corner of the screen, tap the level/combat power icon -> there you can check the amount of EXP required to reach a new level.

On the same screen, you have some upgrades; ATK up, Speed up, Blessings, Experience up, DEF up, and Max HP up. Spend gold to level up these upgrades. Increase the party level to increase the level cap for these upgrades.

Go to the party menu screen -> tap the recall button. You can spend rubies to double the reward.

At the top of the screen, you can check the stage progress bar. Once it reaches the maximum point, you will move to the next stage. After every 5 stages, you will have to defeat the boss in the combat to progress to new stages. Tap the boss icon to fight. If you don’t tap it, you will not progress. So it’s the best way to farm EXP, gold, and EXP stones.

1.) Send Allies On The Quests, Activate As A Support

If you want free gold, then one of the best ways is by sending allies on the quests. However, allies sent on the quests would not join you in the combat. To send the ally on the quest, tap the shield/coins icon at the top-right corner -> tap the gold icon -> formation -> select the ally. Collect the gold on due time.

Rear Support -> You can set the allies as support. For example; If you select Flupei as a support unit, the gold drop rate will increase by 20%. If you select Mayna as a support unit, DEF will increase by 20%. In short, their passive skill will come into effect. Tap the shield/coins icon -> tap the hand icon -> formation -> set the allies as supporters.

The game will over as soon as the main hero dies. If you want to keep the main hero alive, then make sure to buy potions often. Go to the shop -> there you can buy potions by spending gold. Additionally, before you start the fight against the boss, make sure to have enough potions in the hand as the game does not let you buy potions within the boss fight.

You can manually use the potion by tapping the potion icon or the hero will automatically use it. You can change the auto-use settings in the menu. Tap the menu button at the top-right corner -> use the <> buttons to change.

3.) Get Free Rewards By Watching The Video Ad

At the top-left corner of the screen, near the camera icon, tap the free reward icon(i). You can earn loads of gold, rubies, scrolls, and more items by watching the video ad.

MY Little Fantasy is a challenging game. As you progress or move to high-level stages, you will face the elite bosses with massive attack/HP/DEF stats. So chances are you will be stuck on these stages. There are two ways to overcome this situation; don’t play the boss mode or recall.

Grind -> The game does not let you progress to next stage until you defeat the boss. If that boss is constantly defeating ally, hero, then don’t fight against it. Defeat the enemies and earn EXP -> level up the main hero and allies. Buy potions and grind as long as you can(level up the main hero, ally). Once you are all set, start the fight.

Recall – Recalling will give you soul stones. Use these stones to rank up allies and the main hero. Ranking up is one of the best ways to increase the power of an ally or the main hero by a massive amount.

Read the guide above to know how to power up an ally or the main hero.

At the top-right, tap the costume icon -> there you can buy costumes; armor or weapon. All the costumes provide a unique boost to the hero. To buy these costumes, you need coins. Complete the special missions to earn coins. Tap the boss icon at the top of the screen(near shop icon) -> challenge. You can challenge three times a day. Defeat the boss to earn coins, artifacts. Artifacts can be used in upgrading the treasure.

Here are all the ways to power up: –

If you have loads of useless equipment items, then it would be better to dismantle them for the scrolls. Tap the hero -> select the gear -> essence -> get the scrolls.

So these are the top MY Little Fantasy tips for beginners. If you have more tips to share with fellow players, make sure to post them in the comment section below.