Nova Empire is a popular MMORTS game for mobile by GameBear Tech. Check out our Nova Empire guide, tips, cheats & strategy to master the game

Nova Empire is GameBear’s first MMORTS(published by Tilting Point), available for free on Google Play Store and App Store. In the game, the player builds its own space station and spy into the star system for the resources. You, as a commander of the space station, work only on strengthening the space station with the help of admirals, ships, and other buildings. The game’s mechanics are similar to other MMORTS games. But its UI is not beginner-friendly. For a beginner, it could be difficult to understand how the game’s mechanics work and what to do next; how to build a stronger space station, attack enemies, defend, collect the resources from the system, and more. If you are having trouble understanding the Nova Empire game, then we are here to help you with our Nova Empire guide and Nova Empire tips, cheats & strategies. Also, see – Nova Empire Promo Codes 2021

Your main job in the Nova Empire game is: –

We will learn about the buildings in the main guide part below. Let’s learn the basic mechanics: – Your space station is in the star system(in the galaxy). And you are surrounded by pirates, enemies. Anyone can attack you anytime. But when you start the game, your base has an active shield that restricts other players in looting your base. But as you progress or level up, the shield will get removed.

With no active shield, other players will be able to attack you. But why? Because by defeating the enemy base, we can loot the resources. We use these resources in building, upgrading, researching, producing. You can also attack other players’ space stations and loot their resources.

To play safe, don’t mess with the players with high strength or make your space station stronger. So, that’s the basic Nova Empire guide for the beginners. Let’s head to our main Nova Empire guide and after it, read our top Nova Empire tips, cheats & strategies to dominate the galaxy.

In this part, you will learn about combat, resources, admirals, buildings, alliances, and much more. Pay attention to all the parts to master the game. 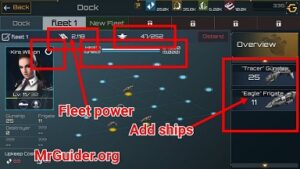 On the main screen of the game, at the top, tap the dock option -> head to the fleet tab or new fleet tab. You can unlock new fleet slots by upgrading the space station. In each fleet, you can set up to one admiral(Read the admiral guide below). Tap the + button to choose the admiral or if already selected, then tap the reload icon at the top-right corner of the admiral’s portrait.

Once done, on the right side, choose the type of ship(i.e. Gunship). And use the seek bar to adjust the number of ships(to add to that fleet). The number of ships determines the power of the fleet. You can build ships in the shipyard in the space station menu.

Admirals lead the ships in space. You can send the admirals to attack the enemy’s space station or collect the resources from the planets. How to get admirals? On the main screen of the game, at the top, tap the +/more icon -> in the menu, tap the naval academy option -> there you can recruit the admirals.

You can recruit for free(a certain number of items in a day). Or use the recruitment directive tickets(complete all the daily objectives to obtain).

How To Increase Admiral’s Level?

As the level of Admiral increases, its leadership level will increase too. Indirectly, it will increase the fleet power as you will be able to add more ships to the fleet. How to level up? In the Nova Empire game, your admiral gains experience points(Required to level up) when you send them in the combat or in March. Or you can use an item named admiral XP. Go to the naval academy screen -> head to the manage tab -> upgrade -> use. 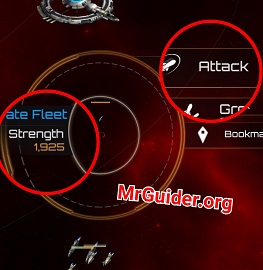 On the main screen of the game, at the bottom-right corner, tap the system option. This will take you the location where your space station is stationed. On that screen, at the top-left corner, tap my station option to see it. There would be many planets and space stations. Tap the orange color symbol(enemies) -> check the enemy strength -> if it is lower than your fleet’s power -> choose to attack. Select the fleet by tapping -> confirm. After it, the admiral will lead your ships and attack the enemies. You will get the battle report in the inbox menu.

By default, your space station is in a specific star system. If you want to move to another star system -> then tap the galaxy option -> tap on a point -> enter. Once entered, on that screen, tap on an empty area and choose jump or move to change the location.

Prior to it, you will need to probe or discover. It can be possible with the radar. By using the probe feature, you can check the resources, enemies in that star system. If it’s good, then move. If not, find another one. Upgrade the radar in the space station menu to get more information. Keep in mind that you would not be able to move there if it’s a planet, alliance territory. Or make sure it’s not out of radar(use the probe feature to get rid of this).

Make sure to join an alliance to participate in the events, for more rewards.

You can scan the planets in the star system(tap the planet -> scan -> send the admiral). By scanning, you could get resources. To scan, you need scan points. These scan points regenerate over time automatically.

You can restore the health of admirals or fleet in the fleet tab. Do it often after being injured in the battle. Go to the fleet tab -> tap the repair button at the bottom.

From the above tips, the main tips are Building ships, researching in the research lab(go to the buildings menu -> search for research lab -> research). Building Ships: – Free ships(not added in the fleet) will increase the dock’s power. Ships added to the fleet increase the fleet’s power. Keep building the ships to become more powerful. To build ships, you need resources. Upgrade the resources centers(trading post, energy plant) to produce more. Hunt the resources from the star system.

So these are our top Nova Empire tips, cheats & a Nova Empire guide for beginners. Also, see – Best MMORTS games for Android