Pocket Ants: Colony Simulator is a popular mobile game where you build a squad of ants and creatures, battle the enemy ants, raid other players, and improve the nest. Read on for Pocket Ants tips and cheats featured with a guide to beginners; creatures, battles, rock, and much more

First things first – the very first thing we recommend is to capture the red ants’ base by slaying down the red ant queen. This task will help you master the combat mechanics quickly. By eliminating the red ants’ queen, you will get Pheromones that you can use to attract creatures. Creatures respawn every 24 hours, red ants respawn every 12~24 hours, and aphids respawn every 6 hours. During the events, spawn timings may reduce to half. i.e. Halloween event. Let’s learn everything in detail and explore all the Pocket Ants tips, cheats & tricks featured in this walkthrough guide –

A Quick Guide To In-Game Resources In Pocket Ants Game⇓

Red Ants: the very first enemy club at the beginning that you encounter outside the base. Recruit soldiers, defeat them, enter their nest, and defeat the red ant queen. You will get x1 pink pheromone and a few gems by defeating the red ant queen. Red ants respawn every x12 hours(real-time).

Gathering The Resources Outside The Map⇓

Well, the tutorial explains everything clearly – but, if you missed that, then this part will help you understand how resource grinding works. First, you can gather the resources manually or send workers to gather them. Go outside the nest and search for leaf and seed. Once found, go over it -> tap the select option in the lower-left corner -> select gather or set it as a source.

If you want workers to gather resources in Pocket Ants: Colony Simulator, make sure to set the source. Also, keep in mind that resource source depletes as you continue to gather from it. Once depleted fully, you will need to find again outside the nest -> set source again.

Getting And Managing The Workers In Pocket Ants⇓

Workers are produced by your queen in the nest. When the queen is hungry, feed food, and get workers. On the left side, tap the “worker” option -> you can assign workers based on your requirement – for example; if you need leaf, use the bar to assign a certain number of ants on the task. You can set them on gathering leaf, processing leaves to get food, send food to the queen, gather seed, and body parts.

Adjust the workers’ behavior based on what you need.

Having a great army of soldiers and creatures in Pocket Ants: Colony Simulator will help you defeat other players, capture the red ant nest, defeat powerful creatures, etc. While in the nest, tap the army option on the right-side -> breed(requires food) -> get soldiers. Use Pheromones to attract the “creatures”.

Getting Pheromones: eliminate other players in the battle or capture the red ant nest by eliminating the red ant queen.

Guide & Tips For Beginners To Battle⇓

->First, you need to assemble the “soldiers”. Tap the “recruit” option in the lower-left corner – this will make you the leader and other ants will follow you wherever you go.

->To start the fight, you will need to go near the enemy ants; the soldiers will start attacking the nearby ants.

->Your army size is limited to a certain number; x10 early. So, we would recommend you to avoid fighting a large number of ants. You will lose more soldiers if you fight more ants than the size of your army. So, the best way to save soldiers and combat wisely is by fighting with a small number of ants at a time. How to do that? Well, it’s pretty easy. All you need to do is “lure” the small number of ants. Go close to the ants’ group and step back to separate them from the group.

-> Capture the creatures, fuse them, and get stronger further to fight powerful opponents!

Use The Honeydew For Bonuses⇓

You can spend honeydew in the shop and buy bonus items that give you buffs; for example – increasing ant workers’ speed, reducing eggs’ hatching time. Increasing the chance of a successful creature fusion.

What Is Rock In Pocket Ants?

Asked by Mike: – I found a rock in the game but there is not a single description about what this rock is for. I picked it up but nothing to do with it and looked around different places for this answer

By Andrew: – so far, as the game is in beta, the rocks don’t do much, h9ever, in a battle if you take the time to get a rock, things won’t attack you, it is a neat little thing, you can also mess with the red ants with it, it’s fun.

By Barry – yes you will get attacked if you are carrying the rock!!

Guide To Creatures In Pocket Ants⇓

There are many creatures in the game that you can capture and add to the army to raid other players or fight enemy ants. Creatures spawn every 24 hours(real-time) in the game or you can use Pheromones to attract them. 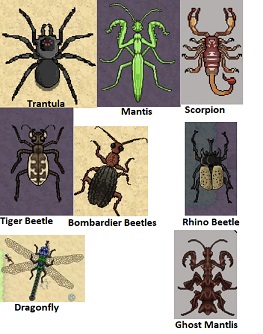 Some of these creatures like Rhino spawn in the night while some in the day. If they are not spawning, you may want to attract them using pheromones. Use Yellow or Blue Pheromones to attract rare creatures.

With Pheromones(Pink Pheromones, Yellow Pheromones, Blue Pheromones), you can attract the creatures. But it’s hard to get. Here’s the list of ways to get free Pheromones in Pocket ants without cheats: –

First of all, how do you get Venus Fly Trap in the Pocket Ants game and why should you buy it? (1) You can get the Venus Fly Trap by spending 2.5K resins in the shop(shop -> resin -> tap the venus fly trap icon; increases the Venus Flytrap Plant Health). Go to battle -> defense -> use there. In Pocket Ants, you can farm/get resin from the trees(garrisoned by the soldiers. (2) The main reason behind getting a Venus Fly Trap is it helps you from the creatures; if a creature(sent by the attacker) comes in the range, this Venus Fly Trap will knock it down.

Tips to counter the Venus Fly Trap in the Pocket Ants game; creatures are weak against the flytrap(they would not attack), but soldiers can attack it. If you want to win; save the soldiers, use”Chrysanthemum” to paralyze the enemy creatures(unfortunately, this flower’s effect does not work on the venus fly trap), and knock it down within x5 seconds.

In the Pocket Ants game, the two flowers; Chrysanthemum and Lavender can be bought with honeydew in the honeydew shop. Go to the shop -> honeydew -> there you will find these two flowers. With Chrysanthemum, you can stun/paralyze the creatures. And, with Lavender, you can get invincible for a few seconds.

So this would be all in this Pocket Ants tips, guide, and info for beginners. Got more tips, cheats, tricks? Comment below.

Published by Ariel Software on Google Play Store, Pocket Ants: Colony Simulator is a great mobile title with unqiue gameplay where you get to manage Nest as a base. You will build the chambers in the nest to process the resources, send workers outside the nest to gather the resources, feed the Queen ant to produce soldiers or more workers, build an army of soldiers and creatures to fight enemies; other players, and creatures outside the nest. If you are new to the game, then this post is for you. In this Pocket Ants guide, we have explained all the core concepts that you need to know as a beginner. Also, we have shared a bunch of Pocket Ants tips, cheats & strategies. So, let’s not waste any time and head to the main walkthrough guide above!