Get Started With The Basics Religion Inc Guide(God Simulator Guide)⇓

(1) How to play: you choose the cult(Monotheism, Spiritualism, Pantheon, etc.), difficulty(novice, preacher, prophet), name your religion, and choose a country/territory to get started. After selecting the territory, you will start gaining believers in that particular territory. In the upper-right corner of the game, you will see the number of years that have been passed so far. Every year, you make a little progress – the long-term goal is to make all the people in the world have unconditional faith in your religion; gain believers, enlighten them, raise fanaticism so that you can have violent followers; fanatics.

(2) How to win: convert all the people around the world in your religion -> enlighten them. Don’t let atheism come in your way.

(3) How not to lose: by suppressing the atheism. Properly spending the enlightenment points wisely is one of the challenging tasks in the Religion Inc game. 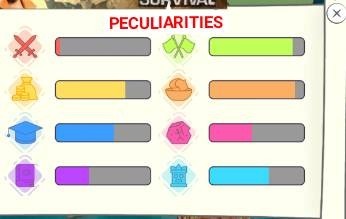 (1) Each territory or country on the world map has unique peculiarities that your religion can adapt to and gain faith from the people living there. Otherwise, the inhabitants of that particular territory will stand against your religion.

(2) Tap on a territory -> then tap the (i) symbol to check its peculiarities. For instance; In the Religion Inc game, The Australians is one of the territories on the world map with traits/peculiarities; undeveloped and primitive. 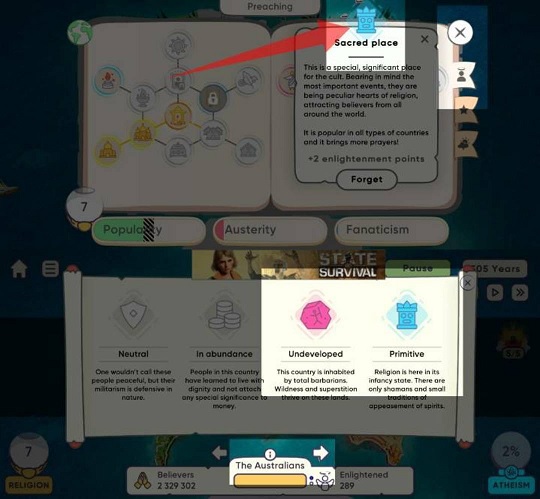 (3) By learning the skills that help you adapt to the peculiarities of a territory, your religion can quickly gain popularity and achieve the faith of people. What skills? Each skill is unique and helps you target a particular trait. For instance; the temple skill helps you gain popularity in rich territories, Preacher skill for peaceful countries, forced conversion skill for militant countries, shelter skill for poor and developing countries. Navigate to the skill menu(religion/cup option in the lower-left corner) -> tap on the skill and check its peculiarity.

Since you start from one particular territory and the goal is to capture the whole world, you might want to attract new believers in neighboring territories quickly. You can do it by increasing the popularity:

Tips To Tackle Disbelief And Atheism In Religion Inc Game⇓ 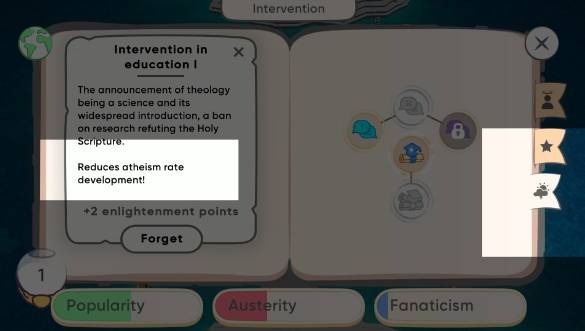 (1) There would be many events in the game that make people not believe in religion or god or not to study religion; for instance, scientists making a flying machine will inspire the people to study science instead of religious scriptures. You need to keep an eye on these events(tap the menu button in the upper-left corner next to the home icon to check all events).

(2) The intervention skills help you fight atheism or reduce atheism. Tap the religion/cup button in the lower-left corner -> go to the third tab; the cloud; tap on a skill to check its detail, spend the enlightenment points, and reduce the atheism. For instance, engagement is one of the intervention skills that cause trouble for the unbelievers. Intervention in education skills reduces atheism rate development.

Watch The Video Ads For Freebies⇓

On the right-center of the gameplay/world map screen, tap the chest option -> get the reward by watching a video ad; the items in the chest can help you progress faster and reduce atheism.

You can find the Religion Inc Trait Combos on the official Religion Inc Discord; there is a special channel called #combos where players share the combos. The link to the Discord for this game is given below: –

So this would be all in this post on God Simulator Religion Inc guide, tips, and cheats for beginners(God Simulator Guide). Got more tips? Comment below.