BoomBit Games, well-known for their popular mobile games such as Bridge Construction Simulator, Build a Bridge, and many more, has just released a brand new game called Idle Monster Factory. In the game, the player takes the role of a mad scientist and manages a monster factory. In the factory, you will build the portals to produce essence – and, use the monster essence for monster production. The more you produce monsters, the more money you make. This Idle Monster Factory Guide and Idle Monster Factory tips, cheats & strategies will help you master the game. So let’s not waste any time and head to the main content.

Let’s get started with the basic concept of the game. The goal is to build the biggest monster production factory. The basic in-game currency in Idle Monster Factory is called essence. At the top-center of the screen, you can check the amount of essence that you have in the stock at the current time. And, at the upper-left corner of the production line screen, the game shows the amount of essence the factory is producing every second.

The essence is required for building/upgrading portals and other factory improvements. With essence, you can start new production lines, unlock new monsters, upgrade the lines – it’s everything. And, you have to keep producing it to progress. Let’s learn everything in detail. 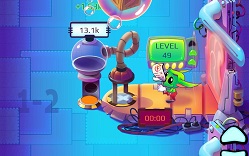 The portal is the center where the green color characters or cute monsters work. If you pay close attention to the monster, you will find that these monsters working at portals bring items from the outer world and then store it in some kind of machine, which crushes the item and produces essence. These items include smelly sock, F test, a dead spider, etc. As you level up the portal, new items get unlocked.

And, each item gives a certain amount of essence bottles. For example – Smelly Sock is equal to a single bottle. Tap on the portal level button -> the portal info will open where you can check the items, upgrade info, next big upgrade, etc. 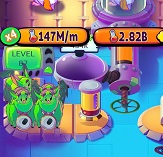 As you know that the monsters working at portals bring the item from the outer world and put inside the machine. After that, the machine crushes that object and transform it into the essence.

The monsters at the stock station collect the essence from these portals and drop it inside the machine. The amount of essence or load they can lift in one round depends on their level. Also, the speed. So make sure you focus on the upgrades. 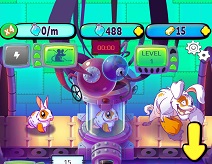 How To Unlock New Monsters In Idle Monster Factory?

To unlock a new monster in Idle Monster Factory, you need to upgrade the production line. The monsters are locked one-by-one in sequence.

How To Increase or Upgrade Line Level?

Tap the monster screen board at the upper-left corner(the green color screen with rat symbol). Use the navigation <> keys to change the monster. If the next monster is locked, there would be a button called show me. Tap that button to enter the upgrade line menu. There you can check the target that you need to accomplish to upgrade line.

You will also get the crown or crown points.

Gold is the premium in-game currency that you can use to buy essence packs from the shop or unlock new items instantly. The gold can be earned by watching video ads.

You have to keep upgrading the portals, machine level, and the monsters who collect the essence from portals. Also, the monster’s body parts; head, tail, legs, body. But make sure that all things are perfectly balanced. For example – portals are producing more essence – but flying monsters are not collecting the whole amount because of the less load/capacity level. Here’s the quick shortcut to understanding the upgrades: –

At the bottom-center of the screen, use the navigation keys to change the line. Buy more production lines and produce more essence.

When you unlock a new line, hire the manager as soon as possible. The guy next to the computer screen manages the portals and stock lifting for you. Without him, you will have to tap the monster, flying monsters, and machines to get things done.

Now and then, a flying box appears on the screen. Tap it to claim free rewards.

At the upper-left corner of the screen, tap the blue color energy button to increase the game speed for a few minutes.

6.) Watch The Video Ads For Gold

At the bottom-right corner, tap the $ sign, scroll down until you see the free gold section. Watch the video ads and get free gold.

7.) Use The Time Machine

Head to the shop again and scroll down until you see the time machine section. There you can watch the video ad for a time machine boost; earn certain hours of income in a few seconds.

At each portal, there are lots of items that can be crushed. Tap the level bar next to the portal -> check the level requirements to unlock that item -> once you reach there, tap the lock sign.