SenRan Sakura is a Japanese Style Idle RPG by iClubJoy Co., ltd. where you play as a lord and build the team of heroes to loot monsters holding the treasure

SenRan Sakura is the latest release from iClubJoy. The game has a variety of game modes; chapter-based campaign mode, PvP Arena, Tower-mode, etc. Also, there are many heroes to collect, upgrade that you can use in the party for PvE and PvP fights. You will find it much similar to other Idle RPGs – but it offers Japanese Anime Style characters, traditional Japanese Music. If you have just started playing this game, then you are on the right page. This SenRan Sakura guide covers all the basics of the game. Also, we have shared a bunch of SenRan Sakura tips, cheats & strategies that you may like. So without further ado, let’s dive in!

Your goal in this game is to make your party stronger – in your party, you can add any hero you want. By raising the heroes by making upgrades like leveling them up, evolving, equipping gears, you can raise the party power and challenge powerful players with equal strength in PvP Arena. You will start from the campaign mode, which has six chapters. You can play each chapter in six difficulties levels; the normal, nightmare, hell, purgatory, and fanatic. The higher the difficulty level, the more powerful monsters you face in the fights – and the more amount of reward you get. In the normal fights, you can add up to six heroes – the total strength of all the heroes would be the total power of the party. For Idle battles, you can deploy up to sixteen heroes – auto-fight. Let’s learn everything in detail and explore all the SenRan Sakura tips & tricks: –

Learn About The Hero System In SenRan Sakura

There are three types of Heroes in SenRan Sakura; Legendary, Advanced, and Common. Legendary Heroes – 5-Star or higher. Advanced Hero – 4-Stars. Common Heroes – 1-3-Stars. The rarity of the heroes – UR, SSR, SR, R, and N. UR and SSR tier heroes are hard to get – but they are the most powerful ones because you can upgrade them further beyond the low-rank heroes’ strength. SR tier heroes are also hard to get and have good strength and can help you in the late game. R-tier heroes are easy to get – but they might not be useful in the late game. And, at last – N-rank/tier heroes are the worst. Don’t waste your time upgrading them. 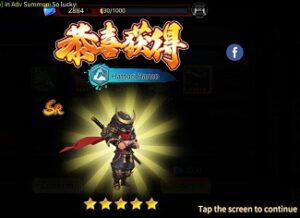 Navigate to the hero menu screen by tapping the hero option in the footer menu -> this section displays the list of heroes that you own – it has two tabs on the right side – navigate to the second tab to see the complete list of heroes featured in SenRan Sakura. Tap on a hero avatar/portrait to open his/her profile. In the profile, on the top-left side, you can check his/her rank – UR, SSR, SR, A, N.

Now let’s talk about the hero types – there are many types of heroes in the game who have different abilities and based on their strength, they are categorized into a specific class.

Summon – Go to the summoning portal -> spend scrolls or diamonds to obtain heroes.

Get Familiar With The Hero’s Skills

In the battle, above the heroes’ heads, there are two bars; the HP bar and the skill bar. The blue color SP bar displays the mana amount and when it fills out completely, the hero unleashes his/her active skills. All the heroes in SenRan Sakura have at least one active skill and passive skill(except one-star heroes). And their skills are different from each other – so make sure to get familiar with each hero’s skills to use them perfectly.

Head to their profile through the Hero menu and hold down on the skill button read the skill’s description.

As mentioned above, 1-3 star heroes are not good for the late game – so you can recycle them for resources like gears, crystal, Hero Evo Stones, Hero Soul, etc. Go to the Hero Altar -> there you can dismantle or recycle heroes for these resources. Higher the hero’s rank, the higher would be the reward from recycling.

Get Stronger To Increase Party Power

Raising the hero’s stats like HP, DEF, ATK, SPD is much important because an upgraded hero with high stats have more combat capabilities than the hero at level 1 or no upgrade. So we would recommend making the heroes stronger in these ways: – 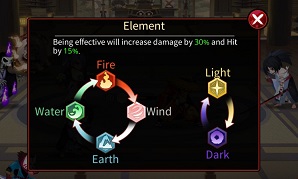 Water, Wind, Fire, Earth, Dark, and Light – these are elements. All the heroes in the game belong to one of these elements. At the upper-left corner of the hero portrait, you can check his/her element.

Like heroes, enemies also belong to one of these elements. Each element counters another specific element and with this advantage, you can increase the damage by 30% and Hit rate by 15%.

During the battle, in the top-left corner, tap the (i) symbol to check the element system. So if you are stuck on a chapter’s stage, make sure to build the team wisely – considering the enemy’s element and the hero’s element. Strong element heroes will have an advantage.

By deploying the heroes based on the element, a certain bonus effect can be activated. During the battle, in the upper-left side, tap the (o) symbol to check conditions. Add a certain number of heroes belong to certain elements to activate the aura effect.

Play All The Game Modes 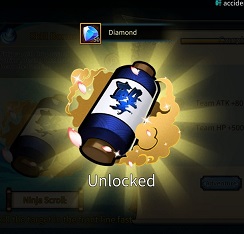 Ninja Scrolls can be obtained by completing Ninpocho quests. In the bottom-right menu, tap the Ninpocho button to check the quests that you need to complete to obtain a specific Ninja Scroll. Before you start the attack, on hero selection/deployment screen, at the top-right, tap the select ninja scrolls button to select a ninja scroll. In the bottom-left corner, during the battle, you will see a bar – when it fills out completely, the effect of Ninja Scroll will be unleashed.

So this would be all in this post on SenRan Sakura guide, tips & tricks.