Spiral Warrior is a brand new Beyblade game where you build the spinning top with parts and battle others. Read on for Spiral Warrior guide, cheats, strategy tips

Electronic Soul, well-known for BarbarQ game, recently published a spinning top game called Spiral Warrior. If you love Beyblade types of games, you will love this game for sure. It features PvE and PvP content where you fight A.I. and other players for the victory rewards. It challenges you to build the best battle top so that you can knock down others in the Beyblade stadium. If you have just started playing this game, then you are on the right page. In this Spiral Warrior guide, you will learn the basics of the game. Also, we have shared a bunch of Spiral Warrior cheats, tips & strategy tricks that you may love. So without any further ado, let’s go through this walkthrough guide!

First things first – your goal in this game is to build the best spinning top. A spinning top has three parts; battle cap, weight ring, and driver. All these parts combined make a Beyblade or battle top that you launch with the launcher on the battlefield to knock down the opponent. The higher the stats of the battle top, the better it performs in the combat. Players are free to change the battle parts and try different combinations for different results. Let’s learn everything in detail and explore all the Spiral Warrior cheats, tips & tricks: –

Learn About The Parts In Spiral Warrior 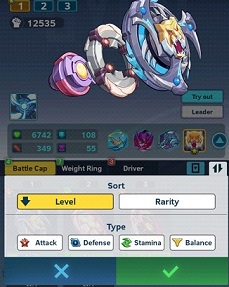 There are four types of parts in the Spiral Warrior game; attack, defense, stamina, and balanced. The spinning top’s strength would be based on the parts that you use in the configuration. For example – attack type part gives you more attack. Defense type part gives you more defense. Stamina parts give you more stamina and recover skills. Balanced parts have balanced attributes. In the part section of the game, you can filter the parts by type; attack, defense, stamina, and balance.

You can check the stats of the spinning top on the same screen; select different types of parts and you will see the change; the green arrow shows an increase in attribute, while the red arrow shows the decrease in the attribute. You can switch between the three tabs; battle cap, weight ring, and driver. The battle cap determines the leader skill.

Get Familiar With The Spinning Top Stats

After you build the spinning top, you will see its stats on the part menu of the game. You must get familiar with the stats so that you can build the battle top wisely.

These are the four main stats of a spinning top in the Spiral Warrior game.

Guide To The Spinning Battles

First, you launch the spinning top. All you do is drag it back and choose the direction and area; a circle or outer circle. And, then release it. After that, all you have to do is cast the skill when the rage is full; it builds up gradually. At the bottom-center, you can check the HP and RPM. RPM determines the spinning strength of the battle top. Add stamina parts to the battle top to lose less RPM. When the HP drops to 0, the battle will come to end; if it’s you, the enemy wins. If enemy’s spinning top’s HP loses to 0, you win. You will get the fragments or materials as a reward that you can use in upgrading the spinning top parts.

Now, let’s have a look at some Spiral Warrior cheats, tips & strategy tricks: –

Build All Types Of Battle Top 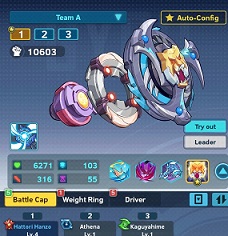 Get The Restrain Bonus In Spiral Warrior 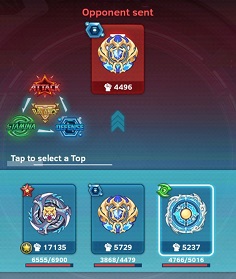 The first thing you do in the battle is to launch the spinning top. After you drag it back with your finger, you will see the circle area; if you launch it inside it, you will get the stamina boost. If you launch it outside the circle, you will get more attack power. So make sure to choose the boost wisely. Also, on the left side of the screen, keep an eye on the meter; launch it when the needle is on the max point for the perfect start.

Preemptive Attack – launch in the direction of opponent Beyblade to collide. If your Beyblade or Spinning Top has restrained bonus, the opponent will take 15% damage.

Increase GP By Completing The Missions

You must raise GP to unlock the challenges where you farm the parts, upgrade materials, coins, etc. Tap the character avatar in the upper-left corner and check the missions. Complete them and raise GP.

Farm In The Challenges

Go to the challenge menu and there you will see plenty of modes where you can participate for the rewards;

You can get the battle parts from the chest or challenge mode. Chests can be obtained by getting victories in the Super Championship mode or from the shop.

At the top-right corner of the main screen, you will find the events and missions. Complete those quests to earn chests, gold coins, green gems, etc.

You will need fragments to upgrade the battle parts; different fragments for different parts. You get them from the chests or challenges. Upgrade to get more attribute boost.

So this would be all in this post on Spiral Warrior guide, tips, cheats & strategies for beginners. If you have more cheats, tips or tricks to share, comment below.