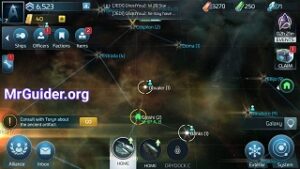 ⇒One of the main in-game currency in Star Trek Fleet Command game is Latinum. You can use this currency to build, upgrade, and research instantly. The game will give you this in-game currency as a reward upon leveling up or from other events(daily goals, missions). Since it’s a premium in-game currency, it’s hard to get. If you are a f2p player, then you should spend it wisely.

⇒Your objective in this game is to increase the home-station power. You can check the power at the top-left corner on the home station screen(interior). To increase the power, you will build, upgrade the buildings at home station, discover new technologies in the R & D Department and by upgrading the ships, officer, drydock. In all these upgrades, you will need a lot of resources; Parsteel, Tritanium, Dilithium, and more.

⇒The player produces these resources at home-station. The main building at the home-station is Operations – Command Center. Upgrading it unlocks new buildings, upgrades, features, and much more. The maximum level of this building is 50 and at each level, you get the weapon damage bonus.

Get To Know About Station

Your station is in the galaxy, in a random system. You can relocate it to one of the station hub’s slots. Relocating is like teleporting the base from one system to another, from a station’s hub to another station’s hub. It will cost you a relocation token. You get this item for free when you start the game. Since you have only one(you can get more relocation tokens from the free chests/daily), use it wisely. To relocate, go to the galaxy screen -> choose a system -> enter system/view -> tap a planet -> relocate. Let’s learn step-by-step:

Guide To Ships And Drydocks In Star Trek Fleet Command

At the beginning of the game, you have two drydocks(Drydock A and Drydock B) in your fleet; so you can only assign up to two ships(Ship A and Ship B) in the fleet. If you want to assign more ships, you will have to build drydock. At the bottom of the screen, tap the locked; Drydock C option -> locate -> complete the requirements to build.

Assigning The Ship To A Drydock

To assign a ship to drydock, tap the + button at the bottom of the screen -> assign ship -> select a ship to assign.

Learn To Swap The Ships

If you have already assigned the ship to available slots and want to change, then swap that ship. Tap the ship at the bottom of the screen -> manage -> on the left side of the screen, you will see the option “swap ship”. Tap it and choose a ship. Note – You must recall the ship to the home station and repair it. Otherwise, you would not see the swap button.

Having multiple ships in the fleet helps you a lot. You can send one ship to mine resources in the system, another ship to attack ship/station. The game gives you one ship for free when you start the game. After it, you will have to build the ships.

Head to the home station(interior)/base -> tap the ships option at the top-left. There you can check the list of ships featured in Star Tree Fleet Command. Tap the build button to start the construction process.

Prerequisite: – Prior to the construction, the player has to unlock the ship. You can unlock some ships by acquiring the blueprints or some ships are unlocked by researching in the R & D department. How to get blueprints? Destroy the high-level hostiles in the systems to obtain blueprints.

First, make sure to recall it to the base. After it, tap the ship at the bottom of the screen. Head to the manage menu -> upgrade. All the ships in Star Trek Fleet Command game have different stats. As you progress in the game, you will battle against high-level hostiles, ships, and players’ base. So it’s important to increase the strength of ships. Tap the upgrade button -> level up.

To level up the ship, you need Ship XP. Ship XP can be obtained from the missions, daily goals, events. Ships can also earn EXP from the battles or other tasks(mining). For example; if it’s a war-ship, then battle hostiles to grant it EXP. If it’s a mining type ship, then send it to mine resources. Sometimes, the game grants EXP.

On the same screen, tap the + button -> upgrade. You can obtain parts for the ships; explorer, battleship, interceptor and more by destroying the hostiles.

Tier Up The Ships

Once you install all the parts in a ship, you will be able to increase the tier level, which, increases the level cap and stats of that ship.

Check Out The Missions In Star Trek Fleet Command

In some missions, the game does not guide you to the checkpoint. You will have to figure out manually. If you tap the quest box, it will show you a hint. We don’t have a full missions list yet.

How To Get Dilithium In Star Trek Fleet Command?

At the start of the game, you produce Parsteel and Tritanium. To start the production of Dilithium, you will have to build the Dilithium Generator, which unlocks at Operations level 10. Prior to it, you can obtain it by completing the missions, quests, events, and from the free chests. Or mine it. Also, see – Dilithium Mining locations

Dilithium is needed to research technologies in the R & D Department.

You can assign up to three officers(Bridge only) in a ship. All the officers featured in Star Trek Fleet Command have unique abilities and provide a variety of buffs/boosts to the ship.

NOTE – As you level up the ship, you will be able to assign more than three officers.

On the same screen, on the right side, you can check the crew stats and bonus. Tap the(i) button to get more details.

How To Get Officers In Star Trek Fleet Command Game?

If you have, then head to the recruit menu by tapping the officers button on the top-left. There are a number of ways to recruit the commanders: –

Head to the officer menu -> tap the officer. There you can level up the officer using officer XP. When you recruit, you also get officer XP as the reward or obtain from the quests, missions.

Promoting -> Promoting increases the level cap of the officer. To promote an officer, you need shards. Obtain shards from recruitment chests.

You can attack ships as well as stations. But in the early game, you have only one option; hostiles. Reach the level 15 to become eligible to attack other player’s station. You can loot resources by invading enemies’ base.

Additionally, after reaching level 10, you will be able to invade enemy ships roaming in the system. Where you can find other players’ base? Around the station hub. Tap the player’s station -> scan or attack. Blue ones are enemies, purple ones are alliance members, and green denotes your station.

⇒There are lots of resources you can mine from the galaxy systems; crystal, ore, gas, dilithium, tritanium. You can check the list/locations here. It would be better to send a mining/survey ship to mine the resources. All these mining ships have the ability to mine a particular resource quickly. You can check the ship’s ability in the manage view.

⇒Players can attack a mining ship anytime. Let’s learn with an example; your ship is mining tritanium in X system. And, the enemy ship arrives and destroys your ship. In this case, you may lose the resources(Cargo). All the ships in Star Trek Fleet Command have a unique utility ability; protected cargo. Go to the ship manage view -> go to the details tab -> here you can see the protected cargo amount. For example; it’s 500. The enemy can not steal this certain amount of cargo from your ship.

This function is similar to the Nova Empire game.

You can see the map here. Credit – DanPMK.

Mine The Resources In Systems, But Wisely

⇒If you explore a bit in the System, you will find mining nodes. There you can mine the resources. And it takes hours. Before you leave the game, send one of your ships to these resources for gathering. You can mine Tritanium in high level systems (check the picture in comments below). For the complete list and locations, check this post.

⇒It would be a good idea to mine in less-crowded systems, because the enemy can raid anytime. Additionally, use the survey ships to mine the resources.

Build Duplicates, But For Mining

The Star Trek Fleet Command lets the player build duplicate ships. For example; if you already have one Phindra, you can build one more. We would recommend you to build duplicate survey/mining ships rather than the combat ships. For example; Envoy, Fortunate. This will help you in farming resources. Always keep in mind that there are limited ship inventory slots. Since you can not dismantle or delete the ships, don’t build duplicates of weak and combat ships. If you reach the maximum limit, you will have to upgrade the ship hanger.

Participate In The Limited-Time Events

Increase the power by upgrading and building facilities at your base. Level up ships, equip parts, and tier up. Upgrade drydocks. Level up officers, promote officers. Research in the R & Department for additional buffs.

Destroy the hostiles to farm Ship EXP, parts, and other items.

Get Free Benefits By Joining An Alliance

Join an alliance and participate in the alliance events for alliance credits, items, resources. Additionally, you can ask for help to speed up building upgrades, construction.

The player can obtain latinum, loads of resources, recruitment tokens by completing all the daily goals. Additionally, complete the missions for better rewards; Ship XP, speed-ups, and more.

Pay Attention To The Ship Types

As mentioned above, there are four types of ships in Star Trek Fleet Command. Mining or survey ships are not good for combat. But interceptors, explorers, and battleships are good for combat. Before you attack an enemy ship, check the ship type and choose the right type of ship for the attack. Interceptors > Battleships. Battleship > Explorer. Explorer > Interceptor. For example; if the enemy is using explorer, send the battleship element ship.