Star Trek Texels 2 is a brand new strategy game for Android and iOS by YesGnome LLC, published by Kongregate. In the game, you buy ships, build a variety of rooms in it, command the officers, and battle in a wide range of game modes such as missions, PvP, and more. The game challenges you to build the best fleet of best ships and beat the opponents in real-time PvP battles. And Today, In this post, we have covered everything about the game you need to know: Star Trek Trexels 2 guide and Star Trek Trexels 2 tips, cheats & strategy to master the game. 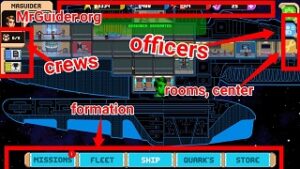 Before you dive into our Star Trek Trexels 2 guide, tips, cheats & strategy part, let’s take a look at the basics first. In Star Trek Trexels 2 game, your main objective is to build the best team of fighters, scientists, engineers, and diplomatic officers. Additionally, you have to take care of the ship, resources, fleet, and training. We will go deep into each section in the guide part below. For now, just keep in mind that you have to train all the officers to progress in the game. Otherwise, you would not be able to win the matches either in the mission modes or in PvP mode. In the PvP mode, you battle against other players and attack with the ships. Read the ship’s guide below for more info. Let’s learn step by step: –

Star Trek Trexels 2 game starts with a tutorial in which you learn the basics of the game; how to build rooms, access and complete missions, complete or claim objectives, and much more. At the beginning of the game, you have only access to the Fragments Belt mode. In this mode, you explore the places, fight against Borg, complete the missions, and earn XP and resources. As you move on, it becomes difficult to strike down Borgs. But if you play the turn in a strategic way, then it will be easy for you to win the matches.

After completing the missions, the game rewards you with XP and after gaining enough XP, your level will go up. Once you reach the level 5, PvP mode gets unlocked in which you fight against other players and earn ranking points. After gaining 300 rank points, Irish V will get unlocked. There are a number of things you have to know; resources are important, officer’s attributes matter a lot, large ships will help you in winning more matches, and there is only one way to progress fast; train the officers, upgrade the rooms/ship. Let’s check out the complete Star Trek Trexels 2 guide and after it, check out our Star Trek Trexels 2 tips, cheats & strategy guide to master the game.

In this part, we will learn about the officers, rooms, ships, fleet, game modes, missions, objectives, training, and much more. Make sure to pay attention to all the parts to master this strategy game.

There are four main resources in the game; Dilithium(purple color), command(yellow), power(red), and research(blue). Among all these resources, Dilithium is the premium(you rarely get it from the missions and you can not produce it). These resources are required for building rooms, purchasing ships, training officers, repairing, healing, and many more tasks. By default, you produce these resources in these rooms; Eps Control(power), Long Range Sensors(Research), and Hydroponics(command). Or when you purchase a new ship, these rooms will shift to the new one(flagship).

To start the production, you need to assign the crews. All you need to do is tap the room -> tap the + icon and assign the free crews. By default, you have two crews available. So you can produce two resources at a time. At the top menu, if you tap the resource icon, then the game will show you the total storage capacity of that resource. To store more resources in the shop, build more rooms(Storage). Or to produce more, upgrade the rooms or build more production rooms in the ship.

At the top-right corner in the ship tab, tap the wrench icon, there you will see the list of rooms. You can filter it by the resource type by tapping the resource icon.

As mentioned above, the game gives you two crews for free. These crews help you in producing the resources in the production rooms. Without them, you can not produce the resources. To get more crews, you need to build the house for crews. Go to the ship menu in the game -> tap the wrench icon at the top-right side -> go to the last tab(three dots) and build the house for crews; Crew Quarters, Standard Crew Efficiency. How to check how many crews you have? At the top-left corner, just below the character’s avatar, you can check the number of crews you have. 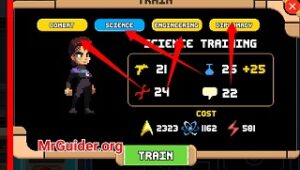 All the officers have these skills; engineer, diplomatic, scientist, and fighters. Fighters are good at dealing damage to the enemies. Engineers can hack into the machines, diplomatic characters are good in dealing/contacting, and scientists are good at analyzing. In the missions, sometimes, you have to look into the machines or transponders, the success rate depends on the attribute of the character who is looking into it. In these situations, engineers, scientists, and diplomatic attributes of the characters come in the role. And to defeat the Borgs, you need strong fighters.

To train, you need training rooms. Tap the wrench icon on the top-right side of the screen. Go to the last tab(three dots, purple) -> there you can check out the training rooms.

How To Get Officers In Star Trek Trexels 2 game? 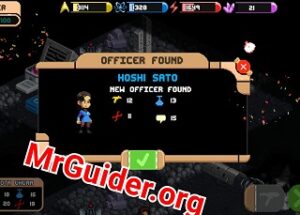 You will need more officers as you progress in the game. But it’s hard to obtain. You can spend dilithium in the store to purchase officer pack. Or in the missions, you can find officers(they are hidden, so make sure to explore all the area in every mission. You could get).

Go to the fleet tab and there you can manage the formation of ships. You can add up to five ships in the fleet. Tap the + icon to buy a ship. Once bought or you already own, tap the ship -> you will see the HP and SP of that ship. Hit the assign button to assign the characters. Choose flagship to make that ship default. You can build more rooms in a larger ship. So always choose a larger ship as flagship. If you want to remove a ship from the fleet, then tap it and choose hanger.

If you don’t know what you have to do in the mission, then tap the objective button just below the character’s avatar(top-right side). Probing or exploring costs probe points. Probe points re-generates gradually.

In the battle, you move the character by tapping on an empty tile. At the bottom-right corner, tap the gun icon to attack Borg. The gun option gets enabled when Borg is in range. Just above the character’s head, there would be arrows. The number of arrows determines the number of turns. You lose two arrow or tuns when you attack Borg. Quick Tip – Keep yourself away from the Borg. Since you have limited turns, make sure to use wisely. Don’t send an individual character near Borg alone. If you move all the characters together towards the Borg, you will get multiple chances of attack(back-to-back). On the other hand, if one character is near(can attack Borg) and another one is too far(cannot attack), then Borg will be able to play the turn. You can defeat it before he plays the turn by dealing attacks from characters back-to-back. And it can be possible if you move all the characters together.

1.) Don’t Beam Out Without Exploring All The Area

In the missions, after completing all the objectives, the game will ask you to beam out(leave) or continue. If you choose beam out, you will be redirected to the mission menu. We would recommend you to choose continue option and explore all the area. You may interact with the officer or get precious resources(Dilithium) if you explore more.

2.) Save Dilithium For Crew and Rooms

You can buy a third crew by sacrificing the resources(power, command, and research). But the 4th crew will cost you 66 Dilithium. So we would recommend you to not to spend this item in any other task except this. Because a crew helps you in producing the resources. And without resources, you can not train the officers. Read the crews guide above for more info. And to build more training centers in the ship, you need Dilithium.

3.) Upgrade The Rooms To Progress Fast

Once you reach the level 6 in Star Trek Trexels 2 game, you will be able to upgrade the rooms. All you need to do is tap the room you want to upgrade and hit the upgrade button.

4.) Use Hurry Mode To Produce Fast

As you know, you assign crews in the production centers to produce the resources. These crews take time in producing the resources. You can use the hurry mode to produce fast. Just tap the production center(anyone) and at the top, there would be a green color hurry button. Tap it and check the success rate. If it’s 100%, then use it. Otherwise, Not! If it gets failed, then you need to repair it and it will cost you resources.

Go to the fleet tab -> tap on the flagship or ships -> choose upgrade -> confirm. Upgrade regularly to maintain the rank in PvP mode or defeat opponents in the PvP mode. And make sure to deploy the characters in the slots. Characters deployed in the ship(fleet) cannot be used in other battles. So choose wisely.

6.) Training Is The Key To Success

If you are not training the characters in Star Trek Trexels 2 game, then you can not progress. It would be better to train the officers to improve all the skills.

In the ship, there is a Sickbay facility where you can heal the dead troops. For example; in a mission, Brog defeats your character. In the next missions, you will not be able to use that character. First of all, go to the ship tab/menu -> character or officer menu -> tap the heal button. After a certain amount of time or healing process, you will be able to use it. And don’t go to a mission if the characters are injured. You will see a red line if the character is recovering from the injury. (Note: – Hold down on a character icon to drag it to a facility).

8.) Watch The Video Ad To Get Benefit