Tales Of Erin is a fantastic ARPG for mobile by Efun Company Limited. Check out our Tales Of Erin guide, tips, cheats & strategy to master the game

EFUN Company Limited has recently released a brand new ARPG Tales Of Erin for mobile devices. It features over 80 characters, lots of game modes, amazing graphics, a good story, and a wide range of game modes in which you fight against monsters for the precious reward. Unlike other games, in Tales Of Erin, you will need to do more hard work in order to progress as its difficulty level is way too high. If you are having trouble getting the victories or understanding the game’s mechanics, we are here to help you with our ultimate Tales Of Erin guide and Tales Of Erin tips, cheats & strategy.

The Basics – Tales Of Erin 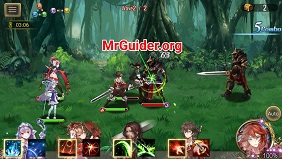 Before we dive into the guide, tips, cheats & strategy part, let’s learn the basics first. In Tales Of Erin game, the battle mechanics are pretty simple; all you need to do is pick the best four characters and defeat the enemies. In the normal modes, you can select up to four characters. And in the dark tide ruins mode, you will have to select eight characters. You start the game from adventure mode, as you clear the chapters(world map), new game modes such as trial, dark tide ruins, star world exploration, multiplayer mode will get unlocked.

You can play chapter mode in three difficulty modes; easy, hard, and extreme. By completing these chapters, you earn player EXP(required to increase the player level), enhancing material(fruit of trials), costume, star gem, and much more. You get these rewards only once. If you repeat the stage, you will not get these rewards(even player EXP). However, if you want to increase the characters’ level for free(Without using enhancing material), then you should repeat the stages.

And star world exploration is the best farming mode. In this mode, you send best race characters on the expedition and after a certain amount of time, they come back with rare items such as potential discovery items(soul essence, jade, essence, enhancing material and more). Level up to unlock this mode. Usually, main game modes get unlocked before level 20.

Like other games, In Tales Of Erin game too, you start pleasantly. But the later stages, multiplayer mode, trial mode’s difficulty level is very high. And getting victories in these modes would not be easy. We would recommend you to build the best characters only(four best characters) in the beginning; don’t spend precious resources on developing useless characters. So this is the basic Tales Of Erin game guide for the beginners. Now, let’s head to the ultimate Tales Of Erin guide and after it, read our top Tales Of Erin tips, cheats & strategy/tactics.

In this part, we will learn about the characters, costumes, equipment, faith points, divinity, enhancing, potential, and much more.

How To Increase The Power Of Characters?

As you progress in the game, you will need to power-up the characters. And there are a number of ways to increase the power of characters. In this part, we will learn about all.

Enhancing is the easiest way to increase the stats of a character; attack, HP, defense, and more. In the enhancing process, you can use two type of items; the fruit of trial(s), the fruit of trial(l). You get these items as a reward for clearing the stage in chapter mode for the first time.

Or if you have unlocked star world exploration mode, you can get these items from there; star world exploration -> forest of trial -> trial of growth -> dispatch members. After one hour, you will get 5 fruits. Go to the party menu -> head to the enhance character tab -> select a character -> tap the + icon to use fruit -> hit the enhance button. This item grants EXP to the character and after gaining a certain amount of EXP, that character’s level will go up.

Without using material; As you know, we need fruit to enhance the character. And we can get it by clearing the stages in the battle/chapter mode. But you would not get it again if you repeat the stage. Next option is star world exploration mode.

Apart from these methods, you can enhance the characters by repeating the stages. Each time you repeat the stage, characters earn EXP. But the amount would be low as compared to the fruit’s power. Repeat a hard stage to gain more EXP.

All the characters in Tales Of Erin game have two types of skills; active and passive. You unleash the active skills by tapping the skill icon in the battle. Passive skill activates automatically. Upgrading these skill can also increase the power of a character. To upgrade the skill, you need skill points. Enhance the character to earn skill points. Go to the party menu -> character list -> tap the character -> head to the skill tab -> skill upgrade -> tap the + icon next to a skill and confirm. Make sure to spend wisely because resetting the skill points will cost you a huge amount of gold coins.

How to obtain jade or essence? Unlock the star world exploration mode -> if you have unlocked, then go there -> head to the forest of trial -> swipe and you will find these options; water/fire/wind/divine/void recruit. Dispatch the members to get these items.

On the main screen, tap the massive battle button to head to the PvP zone. You can create your own battle or join other players. Defeat the monsters and get the rewards. The best thing is in this mode, you get help from other players. Depending on the contribution(Deal damage done by you), you get rewards. Tap the quick join button to join a battle, created by other players. Or tap the create battle option to create your own. Head to the helper list to join the battle manually(pay attention to the suggested level, don’t join a high-level battle).

And in the battle, at the top, you can check your contribution as well as other players’ contribution. You get rewards upon victory. If deceased, spend star gems to play again. Or tap the menu button at the top(in battle screen) -> retreat to go back to the main game. Join it again (At the due time) to claim the rewards. Usually, it lasts for 10 minutes. Or if you choose to give up, you will not be able to join that battle again.

It’s a great game mode to get free rewards and player EXP.

Whenever you level up, you earn star gems and faith points. You can use faith points to activate more special skills. Go to the party menu -> change divinity -> tap on a locked special skill -> activate. For the first time, you have Zealous Blade. You can unlock soul of great sin skill once you upgrade the Zealous Blade to level 10. It will cost you 150 faith points. How to upgrade the divinity level? Play the game; chapter mode/multiplayer mode/trials and more to gain divinity EXP. After gaining enough, divinity level will go up.

So this is the Tales Of Erin guide for the beginners. Now, let’s check out our top Tales Of Erin tips, cheats & strategy guide to master the game.

You would not be able to progress in this game without 4-star and 5-star characters. 3-Star characters are average in all the stats and would not help you in long run(except a three-star healer). We would recommend you to collect as many star gems as you can by playing the chapter mode or complete the quests/achievements. And spend all those star gems in summoning(event summon). We got two five-star characters, two-four star characters by summoning in early stage(before level 17).

But if you have just started playing it, then play with default heroes(three-stars) and level up them(don’t use fruits, repeat the stages to level up). Save fruits for high-rank characters. However, this strategy will consume more time. But after it, you will be able to enhance the 4/5-stars characters instantly. On the other hand, if you spend all the fruits in enhancing three-stars heroes and later you got the 4-star or 5-star characters from summoning, it would be hard to level up them as to get fruits, you need to clear the stage. And you don’t get fruits by repeating it.

In short, don’t waste all the resources in developing 3-star characters. Because later you will definitely get high-rank characters from summoning.

2.) Pick The Best Four Class In The Battle

You should experiment with the team combination. Make sure to include one healer(healer’s skill will help you in restoring the health of injured units), warrior(warrior, having best defense power will protect the attackers/sharpshooters), and sharpshooters(sharpshooters are the best attackers, attack from a range, behind the warriors). Or you can choose a magician(with great passive or active skills) or include one more warrior. You can get more information about the character class in the guide part above.

In Star World Exploration mode, you have to dispatch the members/characters. To get more rewards, send “best race” characters. You will see the best race label on the character’s icon on the selection screen. You could get additional rewards by selecting the characters on the basis of race.

4.) Upgrade The Costume To Power-Up

As you know, a costume can increase the stats of character by a massive amount. So it significantly impacts the character’s power. Don’t forget to upgrade it. On the main screen, go to the costume tab -> enhance costume(upgrade only four-star or higher) -> select the costume -> tap the + icon to select the enhancing material(you can obtain it from the chapter mode, star world exploration) -> confirm.

You can upgrade the costume’s stat/skill using the costume-fusion feature. Head to that option -> select the costume -> at the top-right, head to the fuse material tab -> choose low-rank costume -> confirm.

You will get a five-star costume+2000 jade+20 enhancing material by enhancing a costume to level 25. To claim the rewards, tap the evnts button at the top-left corner, head to the costume rebate option -> there you can claim the costume rewards.

5.) Complete The Quests For Star Gems

Since star-gem is a premium in-game item, it’s hard to obtain. Pay attention to the quests and complete them ASAP to progress in a right way and to earn free star gems.

6.) Complete The Side Story Events

Completing the quests grants you rewards, but the amount would be low. To get high-quality rewards and in huge amount, we would recommend you to focus on the side events. On the main screen, at the top-left corner, tap the event option and there you can check the quests. Or on the main screen, just below the battle button, you can check the ongoing side-story event. These events last long for a limited time. Complete them ASAP for fabulous rewards.

So these are our top Tales Of Erin tips, cheats & a strategy guide for the beginners. Also, see – Best strategy games for Android