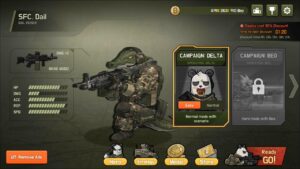 Bad 2 Bad Delta is a new shooting game for Android by Dawinstone in which you play as a commander and fight against the enemies. It features lots of game modes, characters, challenging levels, and much more. In this post, we have covered everything about the game; Bad 2 Bad delta guide, Bad 2 Bad delta tips, cheats. Let’s start the guide first;

As usual, it starts with a tutorial in which you learn about the basic of the game; how to play, fire, deploy units, HP recovery, ammo, and much more. After the tutorial, you can manually handle all the things as you want.

The Basic – In this game, you play as a commander and your objective is to destroy all the opponents, their vehicles. Initial levels are easy, but, later it becomes more challenging and addicting. You have to take care of plenty of things; hero upgrades, units, upgrade units, and much more to increase the battle power.

The controls -> At the bottom-left corner, there are navigation controls, at the bottom of the screen, tap on a card to use, and at the right corner, there is a fire button to shoot down the enemies. Let’s start the Bad 2 Bad Delta Guide

At the beginning of the game, most of the game modes are locked, complete the campaign mode stages to unlock rest modes. You can adjust the difficulty level before you enter the battle; easy or hard. Game Modes;

You start the game from Delta Mode.

Bad 2 Bad Delta game features lots of heroes. Heroes’ stats are different from each other;

How to unlock new heroes?

You can recruit the new hero using Bay. Bay is the in-game currency, can be earned by getting victories in the battles. You use Bay in recruiting and upgrading heroes. To recruit -> main screen -> hero -> select a hero(use < >) -> recruit. 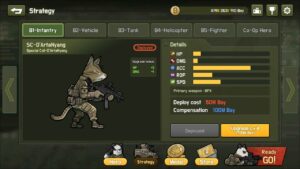 Cards are of many types; grenade, ammo, health kit, vehicles, tanks, supporters, and much more. You just tap on a card to use it; to deploy another commander, tap on its card, to throw a grenade, tap on the grenade card.

To check -> go to the main screen -> strategy -> commanders, vehicle, tank, fighter, hero, helicopter. New cards get unlocked after you clear the stages.

In this part, we will talk about the Bad 2 Bad Delta tips, cheats to slay down the powerful enemies in no time! 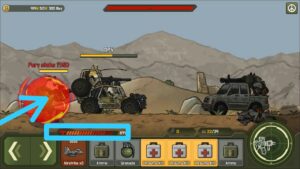 Fury State activates when the fury bar reaches 100%. Once activated, your character deals more damage to the enemies. You don’t need to worry about your health; just go close to the enemies and start shooting. Note: -It is a temporary state!

After the battle starts, don’t move instantly towards the enemy, wait until you get all the cards. Deploy your commanders and then move onward.

⇒ If your character is injured, move back and wait for the health kits/cards.

⇒ Some enemies leave useful items for you. Pick up these items;

⇒ Play stages again and again for rewards. And use these rewards in upgrading.

⇒ Don’t wast your grenades, use at the right time; when the situation is not under your control

So this is the Bad 2 Bad delta guide & tips for the beginners. Download the game – Here[Google Play Store]. Also, see – Best platformer games for Android