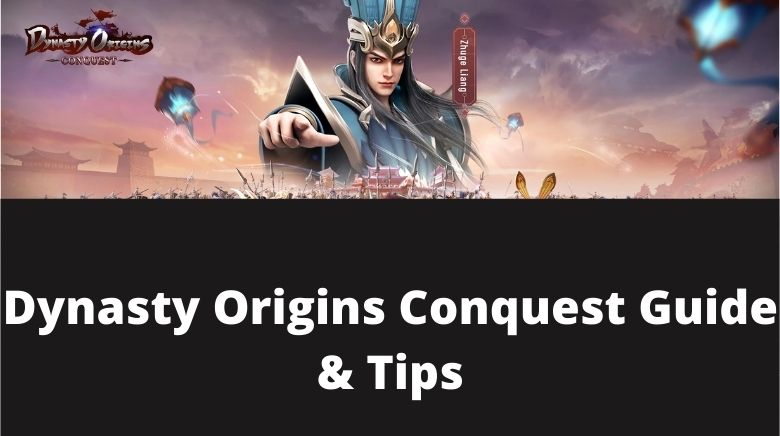 Getting Started With The Dynasty Origins Conquest Basics⇓

In the Dynasty Origins Conquest, your goal is to get stronger, complete all the PvE challenges, and dominate in the PvP league rankings. In the top-left corner of the screen, you will find the TBR/Total Battle Ratings – which display how strong you are. By upgrading the heroes, mages, unlocking index titles, TBR will increase and you will be able to defeat the enemies in PvP and PvE battle game modes.

At the beginning of the game, you will progress through the chapter mode; each chapter features a set number of battle stages and challenges that you must complete to progress further. From the chapter mode stages or PvE stages, you will earn the EXP, which you need to accumulate to reach the next level. Each new level unlocks new functions; like alliance, challenges, daily quests, PvP, etc.

On the city screen, you will find a lot of menu options;

At the beginning of the game, we would recommend you to follow the basics. You should be focusing on completing the chapter stages(Nine Prefectures -> chapter stages) to grind EXP and level up(new slots on the formation set up are unlocked at certain levels), unlock specialties for instant rewards, and play the PvE battles for RSS. Once you have unlocked “Quest”, make sure to do the dailies as the dailies give you a lot of EXP and help you level fast.

Story quests give you abundant rewards too. Consume all the arena attempts daily. As you progress further, you will face more challenging quests, battles, and PvP opponents; so make sure to strengthen the heroes. Below we have shared guides on battles, heroes, and mages.

Heroes are the main units that you will be using to fight the enemies. Dynasty Origins Conquest game features over 50 heroes; each hero possesses unique skills, strengths, and heroes.

Hero Classes; heroes in this game belong to these classes; Paviser. Infantry, Light Cavalry, Heavy Cavalry, Archer, and Adviser. The following class guide will help you understand the class roles;

You can check the class of a hero on his/her profile page, below the faction icon.

The formation would depend on the number of slots that you have unlocked so far. As you level up, the game will let you deploy more heroes. Initially, you have only 4 slots. The following squad building or formation setup tips will help you if you are a beginner;

Dynasty Origins Conquest Tips For Picking Heroes In The Squad⇓

Get familiar with the heroes’ skills, class, and talent skills. It’s important as if you don’t know the strengths or weaknesses of a hero, you will not be able to build a good squad. On the city home screen of the game, tap on the heroes option in the lower-left corner, tap on a hero portrait card -> check out his talent skill, active skills, etc. On the same hero profile screen, you will find a guide option -> tap it to check its stats, recommended combination, and other details.

Players can assign X1 mage in the formation/squad. Mages have unique skills and strengths. Tap the “Strategiest” option in the left bottom of the city screen to enter the mage screen. There you can check the skills of all mages and upgrade them using tome of magic.

Coins; can be earned from the chapter stages. Spend on hero upgrades or buying other in-game items or currencies. Stamina; requires to play the chapter stages. Stamina regenerates every X6 minutes. Ingots; the most precious currency in the game, which you can earn from chapter milestone achievements, daily quests, achievements, milestones, etc. Or with the help of gift codes.

Feats; to level up heroes

On the exploration map(Nine Prefectures), as you complete the stages, specialties facilities are unlocked where you can spend blitz to get material items and EXP instantly. Pinch out/in fingers for Zoom in/out to look around the map. Tap on the specialty facility -> blitz using the stamina -> get instant rewards. 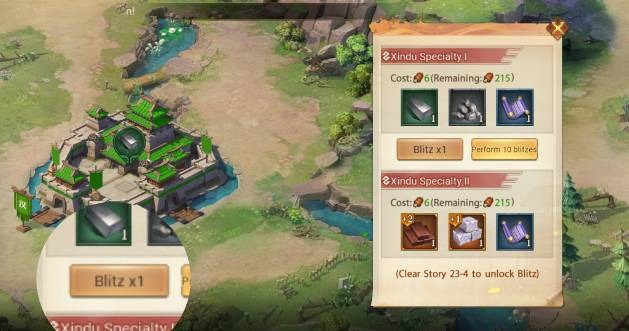