Read on for the GODDESS OF VICTORY NIKKE guide & tips for beginners. 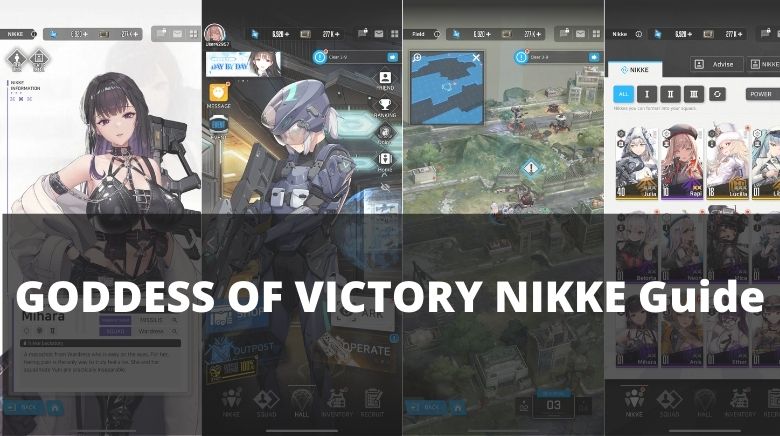 In the early game, you should be focusing on the campaign mode stages; clearing 5 campaign stages upgrade the outpost defense level. As the outpost defense level increases, you get more idle rewards such as cores, combat records, EXP/record, credits, and equipment. You will need these resources to upgrade the NIKKEs. On the hall screen, in the lower-left corner, tap “Outpost Defense” -> collect the resources.

You will earn EXP, credits, cores, gems, equipment, etc. from this mode

For battles, you will need to set up a squad of five NIKKEs. Make sure to check the enemy details and the distance. Build your team based on the enemy you are going to fight. For instance, if the enemies are far, you should add SNIPER NIKKES to the team. You should add NIKKES, who use shotguns, submachine guns, and assault rifles if the enemies are close. Below we have provided the weapon details.

During the battle, you can control one of the NIKKES. If the stage is easy, you can put it on auto. If not, then it would be better to fight manually. Select a NIKKE; then you have to aim for the target(always target the CRITICAL AREAS).

GUIDE TO BUILDING A TEAM:

The first thing you should be doing is getting acquainted with the character’s abilities(active, passive, and burst). Once you are familiar with their abilities, it would be easy to build a team.

Tap the NIKKE option in the lower-left corner to open the character menu. In the top-right corner, tap NIKKEPEDIA to check all the characters and costumes. Tap on a character to see the details. Above the equipment slots, pay attention to the four icons; code icon(fire, water, wind, electric, and iron), weapon(AR, SMG, SG, SR, RL, and MG), class(attacker, defender, and supporter), and the company icon(Elysion, Missiles, Tetra, and Pilgrim).

How To Get Equipment In GODDESS OF VICTORY NIKKE

You can get equipment from the shop, outpost defense, campaign, and ark game modes.

Or from other sources such as daily login, quests, achievements, and events.

Players can level up NIKKES using credits, combat records, or consuming battle sets. You can grind core, credits, and combat records by defeating enemies in the game modes or completing the main/daily/weekly quests. For level 10 or above, you will need core dust too. OR collect the idle reward from the outpost.

Limit break NIKKE to increase or unlock the max level cap or star level/grade. Limit break requires NIKKE shards, which you can obtain from recruitment or completing the quests.

GODDESS OF VICTORY NIKKE Guide To Weapons Equipped By Characters/NIKKES:

Using ” SKILL DEVICE ” material, you can level up the characters’ skills.

In the outpost area, you can construct and upgrade buildings. Also, there is a dispatch center where you can dispatch NIKKEs and get free rewards. Upgrade the command center and elevator to unlock new building slots or the max upgrade level. You will need construction materials to upgrade buildings, which you can obtain by raising the outpost defense level or other outpost sources.

Hotel -> A luxury hotel which NIKKES can check in at. You can always find NIKKES from Perilous Siege.

Toy Store -> A toy store filled with various toys. An eye-catching huge toy is there.

Train Station -> You can always find NIKKES from Zephyr here.

Workshop -> A workshop that churns out one item after another. You can always find NIKKES from Raze & Rebuild.

Arsenal -> An armory where various weapons used by NIKKES is stored.

Generator -> A large generator. You can always find NIKKES from Metis here.

……will be updated soon.

So this would be all in this post on GODDESS OF VICTORY NIKKE Guide for beginners.