Check out this State Of Survival Best Heroes guide to learn how to efficiently use the heroes in the game. Also, the list of heroes & their roles. 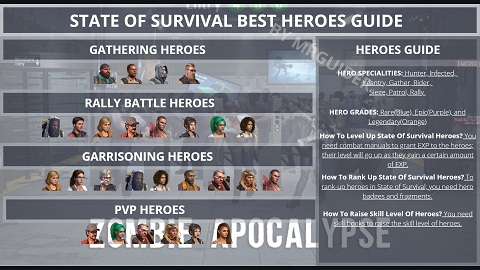 Click here to see the full picture. Scroll down to check the State of Survival Best Heroes Guide 2022.

The three grades/tiers of heroes in the State of Survival game are; Rare(Blue), Epic(Purple), and Legendary(Orange). Legendary > Epic > Rare. The legendary grade/tier heroes are hard to get and develop. Epic tier/grade heroes are easy to get and develop as compared to legendary heroes. Blue ones/Rare ones are weak but easy to develop.

All heroes are useful – some are good at gathering, while some are good in PvE or PvP or rally battles. All you have to do is utilize them properly. For example – sending heroes with siege specialties to attack cities. In this part, we have listed the heroes and their strengths: –

How To Level Up State Of Survival Heroes?

You need combat manuals to grant EXP to the heroes; their level will go up as they gain a certain amount of EXP. You can obtain these manuals from the explorer trial mode, by defeating infected on the wilderness, and events. Access the explorer from the Hero Precinct building. In that mode, there is a mini-map at the top-left, tap it to check the supply boxes. Visit these points and claim those boxes. You get these combat manuals from there.

If you have, then open the hero profile page and tap the (+) button next to the EXP or Hero Level. And, use the combat manuals.

How To Rank Up State Of Survival Heroes?

To rank-up heroes in State of Survival, you need hero badges and fragments. You can obtain the badges from hero search, explorer trial mode, and from the missions or events. Obtain fragments from the hero search(Hero Precinct -> search), alliance store, and daily deals. If you have these materials, then head to the hero profile page and tap the ⇑ button next to the hero rank option and confirm the action.

How To Raise Skill Level Of Heroes?

You need skill books to raise the skill level of heroes. All these heroes have a variety of skills; troop effect, damage reduction, attack, defense buffs, etc. Go to the hero profile page and tap the skills button at the bottom-right -> select the skill and hit the refine button. Rank up the hero to unlock new skills. And, you can obtain the skill book from hero search, missions, events, explorer trial mode, and other game sources.

So that would be all in this State Of Survival Heroes guide for the beginners – 2022. Also, see: –