The Burgle Cats is a new mobile game by PONOS Corporation. Read on for The Burgle Cats guide wiki walkthrough: tips, cheats & strategies for beginners!

In this The Burgle Cats guide wiki walkthrough, you will learn about the rosters aka cats or characters in the game, a full list of cats that you can obtain, battle tips & tricks to steal the treasure chests, and other core aspects of the game such as making cats’ stronger, cats’ skills, cats’ outfits, and accessories, how to get new cats, rank-up, manor security, and much more. So without further ado, let’s get started: The Burge Cats guide wiki walkthrough for beginners: –

Getting Started With The Burgle Cats Basics Guide⇓

This is a CAT HEIST game where players build a team of five cats and raid each other mansions to loot the treasure chests and other resources. There are two types of HEISTS; Burgle Battle and Ticket Heists. In the burgle battle, you will infiltrate another player’s mansion and try to steal the treasure chests and if you manage to steal the chest, you will gain the Burgle Points. There are three types of chests that you can steal from the enemy’s mansion; traps, outfit, and equipment. 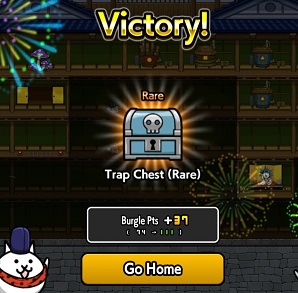 In this The Burgle Cats guide part, you will learn about the treasure chests, guards, traps, decoy vault, etc.

(1) Whether it’s burgle battle mode or ticket heist mode, the battle rules are the same. First, you need to select x5 top-tier cats among all the ones that you have collected so far. Read the cats guide below for more details on cat tier/ranks/grades/stats. After you have picked the five cats, you can proceed to the heist; if the cat has a skill, it would be activated each time you move into a new room. Not all cats have skills though.

(2) Your goal would be searching for the treasure chest. It would not be easy as enemy mansions are protected by guards and traps. The traps create noises, reduce willpower, and apply debuffs on the cats.

(3) Treasure chests are kept behind the golden doors called vaults. Each mansion has three vaults; two deceiving vaults, one real. Decoy vaults or fake golden doors are guarded by dogs; if you open the decoy vault, the guard will come out and catch you in no time. But you have to take risks. 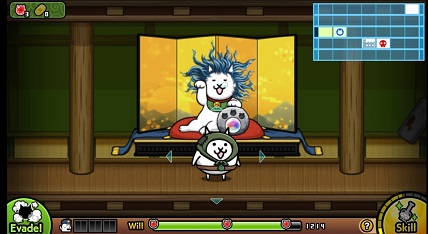 (4) Cat God Shrine: You can steal spirits from the shrine where the cat god sleeps. If you open the vault, the cat god will wake up and you will no longer be able to steal shrines. So it would be better to sneak into his room and steal the spirits when he’s asleep. The three red cat shape faces icons are “spirits”. When you start the battle, you have 0 spirits. You can check it at the bottom of the screen; the will bar has three spirit icons.

(5) Willpower: if you lose all the willpower, the game will be over. You can see the willpower stats at the bottom of the screen; the will bar with three spirit badges/icons. The willpower starts reducing over time, gradually. You will lose it more if you get into the traps.

The manor is the home of cats. You can see it on the main screen of the game. It has a couple of factories; the burger factory, soda factory, and fries factory. These factories produce resources such as hamburgers, soda, and fries. You will need these resources to play battles; for example; the ticket heists cost hamburgers. Also, from time to time, on the manor screen, you will see the cats asking for these food resources. An icon appears over their head; tap it to give them resources and in return, you will gain the gold coins.

You can upgrade the factories to yield more resources.

You can use the auto-place function to set the traps. But we advise you to place traps manually. Follow these tips: 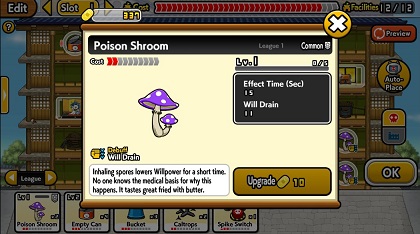 Manor Security TIPS: Make sure to check out the traps’ effects – all the traps are different. Some traps make noise and alert the guard dogs while some traps reduce the cat’s willpower. You should place the noisy traps and guard dogs in range so that they can be alerted. If you tap and hold the noisy trap, you will see its range. For instance, the bucket. 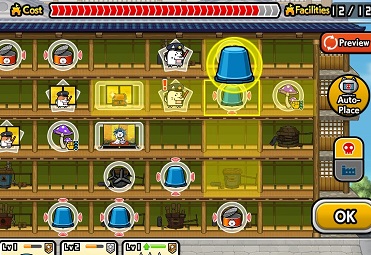 Place the traps that reduce the willpower on every floor.

There is a limit on how many traps that you can set in the manor. On the manor security screen, at the top, you will see the cost. Tap on a trap to check its cost; the cost is displayed as icons(>>).

You can upgrade the traps in The Burgle Cats game and increase their effectiveness.

To upgrade the traps, you will need duplicate traps that you can get from the trap chests.

If the enemy successfully escaped the manor with the treasure chest, you will lose the Burgle Point. On the main screen of the game, at the top, you can see the Burgle Points that you have in the present. Accumulate more to rank-up and climb to the next leagues for better rewards. 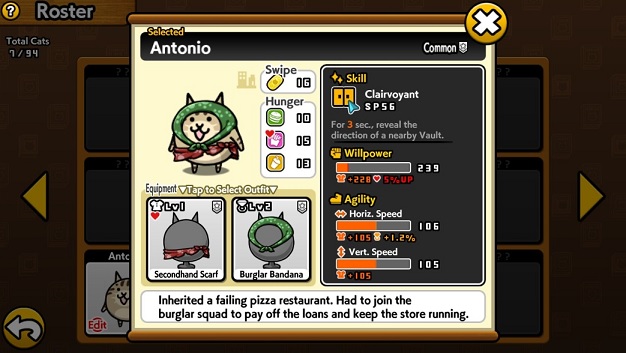 Cats aka Rosters, are the characters that you need to raid the enemy mansions. As of writing this guide, The Burgle Cats game features over 90 cats. On the left side of the screen, tap the (>) side menu button -> choose roster -> there you will see a list of rosters or cats that you have got so far. Tap on a cat. Its profile page will open with a lot of information that you should read to get familiar with it; the stats, skills, willpower, agility, vertical speed, equipped gears, etc. And, the grade on the top-right side.

How To Get New Rosters Or Cats In The Burgle Cats?

In The Burgle Cats game, you can get new cats or rosters by spending the tickets. On the main screen, tap the cat hunter button at the bottom. This will take you to the cat hunter screen where you can spend the tickets or cat food. Based on the spending, you will get random cats; common, rare, super rare, and uber rare.

Clothes or accessories can be obtained from the chests that you get by winning the battles. These gears can increase the cat’s willpower and agility. Tap the side menu on the main screen, choose roster, tap on the cat, tap on the outfit/equipment slot, on the next screen, you equip outfits and accessories to the cat. Tap on an outfit to see its stats; you can upgrade the outfit if you have enough duplicates available to sacrifice as EXP.

You can earn cat food, tickets, chests, and other stuff for free by completing the missions. On the main screen, tap the mission on the lower-right, there you can see the normal missions, daily missions, and limited missions. Complete ’em all and accumulate cat food, chests, etc. You can use cat food to hunt new cats.

So this would be all in this post on The Burgle Cats guide wiki walkthrough for beginners. Got more tips? Comment below.