Jam City, the publisher of Harry Potter Hogwarts Mystery game has just released a brand new RTS game on Android & iOS. It’s called World War Doh. In this game, the player builds the best deck of best cards lead by the best commander to destroy or finish the enemy’s towers and commander. The fast-paced battles last long for a few minutes and within this fixed limit, you have to take the lead. All you need to do is score more points/stars than the opponent – destroy the healing tower or rage tower. Or kill the enemy commander to get the victory.

If you have just started playing this game, then you are on the right page. This World War Doh guide covers the basics of the game. Also, we have shared a bunch of World War Doh tips, tricks & strategies that you may like. So without further ado, let’s head to the main content.

Deck Management and Troop Management are the two things that you need to master. In a deck, you can add up to 8 cards – you are free to choose from all the cards that you have unlocked so far. You must build the deck wisely – featuring the cards that cost low Doh, can attack buildings, troops, both, assist commander, or target enemy commander. To win the battles, you either kill the enemy’s commander or destroy the towers before the due time. Let’s learn everything in detail and explore all World War Doh tips & tricks: –

Learn About The Doh Cost

“Doh” is the mana that you need to cast the card in the battle. Each card has a different Doh cost. For example, Rex or T-Rex card costs 3 Doh. Doh replenishes automatically during the battle. Or if you try to grab the Doh bucket that falls randomly in the battle, you can recover it immediately. At the bottom-center of the battle screen, the mana bar displays the remaining Doh. At the top-left corner of the card, you can check the Doh cost.

Here we are going to share some useful tips that may help you build the best deck based on the league you are planying! 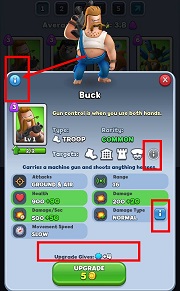 1.) Learn About The Card Strategies

All the World War Doh cards work differently and it’s important to know how to use them. Tap the card -> info/upgrade -> this will open the card’s profile -> tap the (i) symbol in the top-left corner of the card’s profile to check the card strategy.

Blocker – these are the cards that protect units so that they can perform their job fully. For example – Safely Dome is the card that you can use to shield commanders and units.

Siege Tactics – these are the cards that attack the buildings or tower and good for pressuring the enemy into defending their structures. For example – T-Rex card.

Support – these are the cards that support the units or commander with healing or buffing abilities.

Disruptor – these are the cards that disable enemy units for a certain amount of time. 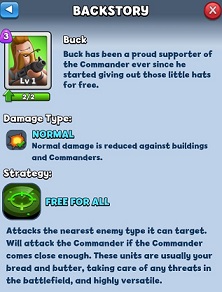 2.) Get Familiar With The Cards

The first tip we would give to World War Doh players is getting familair with the cards. There are spells that you can cast anywhere on the battlefield. Buildings card deploy a turret or machine gun to attack from a fixed location. Some troops attack the enemies freely.

Head to the Prep/Deck tab -> tap the card and open its info -> check the type, targets, and read all the details. We would recommend you to include at least one spells, x1 assist cards, x2 building cards, and x4 troops(ground, air target, with high HP stats and AoE DMG, Ranged, Melee).

The Battle Strategy To Win Matches

Save Commander – you can manually move the commander – unlike the cards or units. Make sure to keep him safe and let the troops soak the damage.

Place Buildings – if you are using the building type cards in the deck, then place them in the center for ranged-attacks.

Tanks & Ranged Attackers combo – cards with high HP stats that can soak damage. Send them first and then ranged-attackers for inflicting massive damage. Tanks will soak the damage and ranged-attackers will deal damage.

Commander Assistance – use these cards when needed; when low on HP or in the last moments when you just want to rip off the enemy commander no matter what. Go with the full strength with a healer.

How To Get Cards?

You can get cards by opening the chests, piggy, monkey containers. Also, from the shop in exchnage for in-game currencies or real money.

How To Unlock New Cards?

Get to the higher-rank leagues to unlock new cards. On the home screen, tap the leaderboards button on the top-right corner to check all the leagues and the list of cards that unlock when you reach a specific league.

How To Upgrade Cards?

You must have enough duplicate cards and the gold coins to upgrade the card.

How To Level Up Commander?

What Are The Towers In World War Doh?

How To Use Tower Skill?

You should use tower skills at the right time. Tap the heal tower to heal the commander; use it when he is low on HP. Tap the rage tower to boost the commander’s power when needed.

Dohbloon is the in-game currency in the World Word Doh game that you can use to buy the commander’s skins, dances, taunts, and bubbles like cosmetics. All these items do not affect the commander’s performance in the battle.

How To Get Dohbloons In World War Doh?

You can get Dohbloons from the league rewards, as a maintenance reward in the inbox, or from the store in exchnage for real money, feed the piggy and use apple for the apple bonus reward. 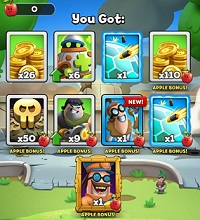 How To Get Doh Shards In World War Doh Game?

You can obtain Doh Shards from the Monkey who search for containers.

What Is World War Doh Monkey?

How To Use Gems?

We would recommend using gems for the chests available in the store to get premium high-tier cards. You can check the card list in the Prep menu. There are common, rare, epic, and legendary cards. The common card’s max level is 13, 11 for rare, 8 for epic, and 5 for a legendary tier.

Why Join A Club?

What Is The AirDrop?

AirDrop or Air Surprise pops up randomly in the battle. Send your commander close to it to get the grab it. This will give you an air chest that you can start unlocking from the home screen. These chests contain coins and cards.

So this would be all in this post on World War Doh guide, tips, tricks & strategies for beginners.