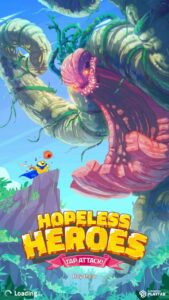 Hopeless Heroes: Tap Attack is a great Idle clicker game for mobile devices by Upopa Games. It features hundreds of challenging levels, heroes, spells, and much more. Check out our Hopeless Heroes Tap Attack guide and Hopeless Heroes cheats, tips and tricks to progress fast and get artifacts

As mentioned above, the gameplay is similar to other Idle games; you just tap on the screen to defeat the enemies. You earn coins by defeating the enemies and recruit other heroes. Recruited heroes attack automatically and continue their job even when you are offline. Most of the features are locked in the beginning, you need to level-up your profile to unlock these features; prestige, achievements, skills, equipment, and much more.

Here’s the process you have to follow in the Hopeless Heroes Tap Attack game:

The game starts with a tutorial in which you learn about the basic of the game; how to play hopeless heroes tap attack, recruit blobs, activate goop, and much more. After the tutorial, you can handle all the things manually. Here’s everything you need to know:

1.) At the bottom of the screen, there are six tabs. The first tab is for spells, prestige, and your main character. You can level up your main character from there, unlock and upgrade spells. And at last, there is a prestige feature which gets unlocked at level 400.

2.) Tapping manually on the screen is a little bit annoying task, so go to the second tab and recruit blobs. These blobs attack automatically and you don’t need to tap on the screen. Upgrading the levels of blobs increases the damage per second.

3.) The third tab in Hopeless Heroes Tap Attack game is of equipment; weapons, hats, capes, auras, and slashes. You get these items after clearing the set of levels. You don’t need to think about these items; just play the game and when you get the chest; open it. The chest contains these items.

4.) The 4th tab is for Goop; Goop is another character in the game and helps you in defeating the enemies. You can unlock these Goop characters in exchange for gems. But you can activate only one Goop at a time.

5.) The 5th tab is for artifacts. You can summon artifacts in exchange for hopes and hopes can be obtained using the prestige feature. These artifacts work as a booster; bonus damage, more gold coins, reduce the cost of heroes.

6.) The 6th tab is the shop where you can buy power-ups; auto tap, refill mana, and multiplier.

It is not a difficult game; you just have to upgrade your blobs to defeat the powerful boss. If you are stuck on a level, just collect coins and level-up your blobs. But these Hopeless Heroes Tap Attack cheats and tips will help you in progress fast;

Goop is one of the main characters in Hopeless Heroes Tap Attack game. You can buy more Goops using gems. Goop character help you in two ways;

Go to the Goop info tab and check the bonus of each Goop you have and activate according to it. For instance, if you activate Xoop Goop, then you will get +0.05 Mana bonus. If you activate Daniel Goop, then it will increase the damage points of all spell blob. To activate, just tap a Goop character. 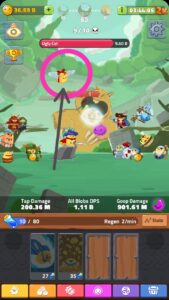 While tapping on the screen, keep an eye on these flying gift, when you see it, just tap on it. These gifts contain a huge amount of gold coins, spells, gems, and many other rewards.