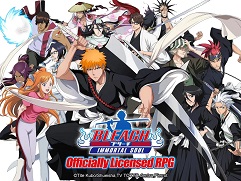 This Bleach Immortal Soul tier list showcases the characters’ tier ratings in these major tiers: SS Tier/Best, S Tier/Excellent, A Tier/Good, B Tier/Average/Below Average, and C Tier/Worst. Scroll down to check the list and the characters’ details –

Another one of the best UR characters in Bleach: Immortal Soul. His rage skill decreases the damage power of enemies, increases the CRIT chances of allies in the back row. The basic mastery skill inflicts single-target damage and duel effect; In the duel effect, your character deals more damage if there are fewer characters on the battlefield.

His talent increases the base stats like HP, DEF, ATK of all allies in the battle arena, and Kenpachi Karnage. Speaking of skills, his mastery skill does single-target damage and inflict disorient effect. His Rage skill steals the DEF and ATK of the enemy, inflicts bleed – also, has the chance to steal buffs from the target.

Yamamoto is one of the best attackers in the ga,e. His basic mastery skill does decent damage to a single target with the ability to stun him/her for 1 round. His ultimate rage skill does AoE damage and inflicts burns for a few rounds.

So these are the SSS tier/Legendary characters featured in this Bleach: Immortal Soul Tier List.

Zanegtsu is one of the best UR characters in the game with the skills to inflict bleed and stun effect. Other than that, his talent increases the bleed effect of all the allies by 8%.

Toshiro possesses amazing CC skills that you can use to freeze the enemies, decrease their healing rate.

So these are the SS tier characters featured in this Tier List.

Another one of the great SSR heroes who excel at inflicting critical hits.

He is one of the best SSR characters in Bleach: Immortal Soul. With the master skill, he can do decent single-target damage and gains rage – helps you use his rage skill quickly than any other hero. Also, he can purge all the buffs activated on the target. Speaking of his rage skill, Byakuya does AoE damage and applies the duel/bleed effect.

So these are the best characters in this Bleach Immortal Soul tier list. Next; A Tier ->

If you are looking for the best tank with CC and support skills, Tessai could be the one. He does decent damage and has supportive, CC skills like silencing the enemies, increasing the reflect damage rate.

These are OK-type characters – can help you clear the high-difficulty waves if used wisely in a proper team combination. Let’s take a look at the Bleach Immortal Tier List(B-Rank).

These characters are not the best; below-average rating characters who can help you pass through the early-game. Don’t expect better from them.

These ones are useless.

So this would be all in this post on Bleach Immortal Soul Tier List Best Characters Guide.