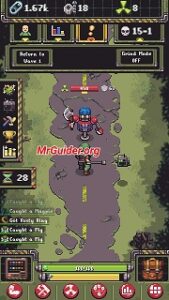 Idle Wasteland is a brand new incremental game for mobile, published by Iron Horse Games. Let’s have a look at the Idle Wasteland Guide, Tips

Idle Wasteland is a unique incremental game for mobile by Alex, published by Iron Horse Games. In the game, you will hunt the creatures, explore various zones, collect the scraps, craft unique items, and try to unlock all the locked features. If you have just started playing it and looking for a guide, some tips, then our today’s Idle Wasteland guide and Idle Wasteland tips will help you to progress fast. Let’s dive in!

Things You Need To Know In Idle Wasteland Game

⇒At the top-right corner, you can see the stage progress. At the end of the stage, you will fight against the stage boss. Unlike normal waves, In the boss fight, there is a fixed time duration within which you will have to defeat the boss, otherwise, you will not be able to progress to the next stage.

⇒Next to the enemy’s HP bar, you can see the armor(stats). It indicates the block rate. For example; If it’s 50, then there are 50% chances that the enemy will block the character’s hit. You can bypass the high block rate by increasing the armor penetration stats. Here’s a brief example to understand the blocked system in Idle Wasteland game –

⇒When the enemy attacks, you will get stunned. Upgrading the suit will grant you resistance stats which may help you to not to get stunned. Go to the crafting menu -> at the top, head to the third tab -> upgrade suit.

Tap the skill graph icon at the top -> here you can check the skill level. Just below the skill level numbers, you can see the EXP bar. Follow the above-mentioned steps to gain skill EXP and level up skill.

To unlock new boosters or things, you will have to prestige. That’s the only way to discover hidden things. For example; to unlock new spells, flying creatures, items.

Once you reach a certain skill level, you will be able to prestige. When you trigger the prestige, you will start from the wave I, that skill upgrades will reset, currency amount will also reset. The positive things are; prestige level will increase and new content will get unlocked, you will earn prestige currency + skill boost(for example; prestige strength grants damage boost, currency boost).

Nuclear Material is one of the rare in-game currencies in Idle Wasteland. You can earn it by watching the video ads, killing monsters, from the environment, achievements. You can use it in various things; powerful upgrades or boosters, in resetting skill tree, to return to wave I.

Every zone offers a special boost. For example; In the forest zone, the creature spawn rate increased by 25%. As you clear more stages, you will unlock new zones and teleport from one zone to another. Tap the menu button at the bottom-right corner -> world map -> tap the zone point -> at the top-left corner, tap the zone name.

You will earn task tokens upon completing a task. Use these tokens to unlock permanent boosts. Go to the menu -> task reward -> spend task tokens.

⇒Kill the monster and they will drop an item that you can use to gain a temporary boost. All the items dropped by the monsters are collected automatically as you kill that creature. Tap the bag on the bottom-right side -> tap the item -> use.

⇒You should activate the spells when fighting against the boss(if it’s powerful). To cast the spell, you need mana. Mana regenerates by 1 every 20 seconds. Spells such as damage boost, attack speed boost, critical hit rate boost helps you a lot in the boss fights. So make sure to activate at the right time.

At the top menu, tap the quest(i) button -> here you can see the current task. Complete the task to earn task tokens, nuclear material, and many more items for free. You can spend task tokens on permanent upgrades.

Prestige pushes you back to the stage I, but you will gain access to new features, boosts. Make sure to prestige all the character’s skills from time to time.

So these are the top basic Idle Wasteland tips for the beginners. If you have more tips to share, comment below!