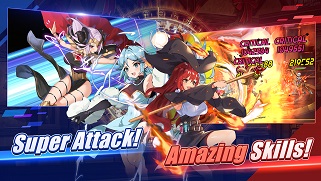 Sword Master Story is published by Super Planet on Google Play Store and iOS App Store. Super Planet is known for popular games such as Evil Hunter Tycoon, Videogame Guardians, Idle Guardians, Lucid Adventure, and many other game titles. Their new gacha game title is “Sword Master Story” which’s now available worldwide – released in October 2020! And, it has a variety of heroes that you will be collecting, developing, and using to fight the enemies.

And, just like other gacha games, not all rosters in the game will carry you to the end game. For beginners, it’s hard to try all heroes and figure out the best ones. With the help of this Sword Master Story tier list, you will get to know about the heroes that do amazingly well and can carry you to the end game and climb up in arena leaderboards.

This Sword Master Story tier list 2022 is classified into four major tier ranks; tier O(OP), S+(best to OP)> tier S(good to best)> tier A(average to good)> tier B(below average to average) > tier C(trash), and so on. Scroll down to check the characters’ skills and strength info): –

The four main game modes in this game are Adventure, PvP, Battle Dungeons, and the Raid mode. You will unlock most of the content in the game by clearing the adventure mode stage 100. There are many stages in the Adventure mode and each one challenges you to become more powerful and beat the bosses and their minions. In PvP mode, you will challenge other players; you can set up the PvP defense in the “organize” menu of the game. Based on the ranking, players get rewards; if you want rubies for free, make sure to climb up in this mode.

Battle Dungeons – here you can farm the in-game items such as EXP potions, gold, equipment, accessories, and Awakening Cube. You will need EXP potions to level up the heroes. Gold will be used as a cost. Equipment and accessory strengthen the character’s base stats – ultimately improving the performance in the fights. Awakening cubes are needed to develop the character’s skills.

In Raid Mode, you fight a powerful enemy and based on the DMG that you inflict to it, the game gives you rewards. If you are in a guild, you will get a bonus guild ranking reward. As a normal reward, you get normal items and if you have luck points, the game might give you free character shards. In the lower-left corner, you can check the luck gauge. In Sword Master Story, you gain luck points through adventure and battle activities.

Make sure to join a guild in Sword Master Story. You can claim extra rewards by being a member of a guild. The higher the guild level, the more rewards, and bonuses you will get. We recommend to join an active guild; you can contact other players through Sword Master Story communities such as Reddit, FB, and look for the active guild. The links to the Reddit and FB group are given below.

To set up the team, head to the main lobby. Tap the “organize” button in the lower-left corner -> tap load icon -> select a character -> tap organize to select the character or replace the character in the team. We recommend organizing a team that should have a healer, DMG dealers, and tanky warriors. To check the best team recommendations, head to the PvP menu -> check the top players’ team compositions.

While building the team, make sure to consider the characters’ abilities; passive and active.

⇒Don’t invest in useless characters: check the Sword Master Story tier list above to figure out the best characters in the game. Don’t invest resources to develop the characters that are useless.

To get stronger in the Sword Master Story, you will need to keep strengthening the heroes that are in the team. (DO NOT WASTE RESOURCES ON USELESS CHARACTERS) Go to the characters menu. Select a character -> level up using EXP potions, develop skills using the awakening cube, reinforce using gold. Tap the + button -> auto equip the equipment and accessory. Tap the transcend button from the + option -> if you have enough character shards, you can transcend the character and raise its potential to the next level.

How To Get Equipment⇓

You can farm top-tier equipment from the high-level PvE Adventure stages, 5-star summons, or dark dungeons.

(1) Complete the quests to earn rubies.

(3.) Character shards can be obtained from the Raid mode or summon.

(4) Players can enhance the equipment and accessories too. But don’t invest in low-tier equipment; the higher the star level, the higher its value. Tap the bag option in the upper-right corner. This will open the bag menu with a series of tabs in rows; go to the equipment tab -> select equipment -> if you have enough shards, you can transcend it.

Tap the reinforce button to use scrolls and gold and level it up. Tap the refine button -> refinement -> refinement gives new options to the gear; you need to use this feature carefully.

There are four types of refinement; premium, rare, normal, and additional. The chances to grade up the gear is higher through premium refinement as compared to rare and normal. Please check the current gear options(stats) before refining. If you are happy with the current options, no need to refine! To check the options of the gear, go-to bag -> gear tab -> select the gear -> check the options on the right side.

So this would be all in this post on Sword Master Story guide and tips for beginners.

How do you rebirth in Sword Master Story? And what’s rebirth?