In today’s post, we will discuss The Royal Affairs Knights; their stats, role, influence, and much more. You can use the knights in campaign battles, boss fights, PvP tournament fights, and most importantly, their stats influence the power of lord/town. Almost all the knights have similar stats, but their role is different. For example; some knights are good for PvP tournament fights, campaign battles, while some not. You will have to invest the resources wisely. For example; If a knight is in good in battles, you should focus on its military stats. Since the resources are limited and hard to obtain, once must take the action carefully when developing the knights. If you are new into the game or have not played this type of game before, you may find it difficult to understand. But, after reading this post, you will definitely become a good lord! Let’s start The Royal Affairs Knights Guide!

How To Get Knights In The Royal Affairs Game

As of know, The Royal Affairs game features over 40 Knights. There are a number of ways to get knights; increase lord level(title), from some quests, from daily log-in reward(James), and through VIP level progress. As you progress through the game; complete quests, campaign battles, level up lord, you will eventually get all the free knights. (Except the VIP ones). 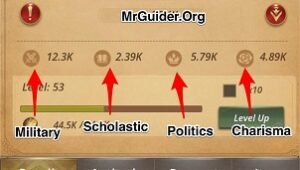 There is a deep meaning of each stat. The tutorial highlights the Knights stats, but would not share the actual impact. Almost all the knights have these stats; Military, Charisma, Scholastics, and Politics.

Military – Military stat shows the attack power of a knight. You can increase it by leveling up the knight or knight’s military aptitude.

Charisma – If you develop this stat, you will get more troops from the realm. Go to the council -> tap the realm manager -> there you tap the manage button to get the soldiers/troops. If you want more troops per batch, increase the charisma aptitude of a knight.

Politics – If you develop this stat, you will get more grain from the realm. Go to the council -> tap the realm manager -> there you tap the manage button to collect grain from the farmer. The amount of grain per batch will increase as the player increases the politics aptitude of a knight.

Scholastics – Scholastics is another one of the stats of a knight in The Royal Affairs game. This stats impact the trade in the town. If you develop the scholastics stats of a knight, you will get more gold from the trade. Go to the council screen -> tap the realm manager(left one) -> tap the manage button to collect gold from the trade. If you want more gold per batch, enhance or develop the Scholastics stat. If you know more about these stats, feel free to share your own thoughts in the comment section below!

At last, if you develop all these stats, your influence will increase. At the top-left corner of the screen, near the lord avatar, you can see the influence points.

How To Develop Knights In The Royal Affairs Game; Scrolls, Rapport, and Items

You can not progress without developing the knights. There are a number of ways to develop or improve knights. Go to the knights menu -> here you can see all the knights in the game. Tap on a knight that you want to develop -> hit the level up button. It will cost you gold and the cost will increase every level. Leveling up a knight improves all the stats. Tap the (i) icon to get more details.

Go to the aptitude tab -> here you can improve the traits of a knight. These traits are military, charisma, scholastics, and politics. Tap on a trait that you want to enhance -> you can use scrolls, trait EXP, and trait manual to develop the selected trait. We have not used the trait manual yet. Scrolls -> You can get scrolls from “The Tower”, plot bosses, VIP, events. Or go to the mall items -> here you get these scrolls by using gems. Trait EXP -> You can use trait folio item to grant trait EXP to one of the knights. You can get this item from Union rewards, The Tower, daily sign-in, and events. To use, go to the items menu -> tap the trait folio item -> select a knight -> use. 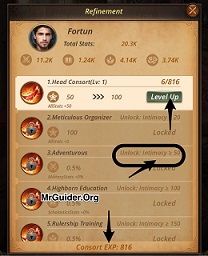 There is a strong connection between knights and consorts in The Royal Affairs game. For example; Fortun(Knight) and Sidonie(Consort). If you go to the castle -> consorts -> tap Sidonie banner -> skills -> note down the skills, go to the Knights menu -> Fortun(Knight) -> Rapport -> you will see the same skills. You can unlock these skills by raising the intimacy of corresponding consort. You can check the intimacy points requirement on the same screen. Tap the level up button to increase the stats(it will indirectly boost the corresponding knight’s stats). And, as you know, an increment in knight’s stats means increment in influence, trade, soldier recruitment, and grain farming.

To level up skills/Rapport skills, you need consort EXP.

The Royal Affairs Best Knights In The Game?

Since the game is new, at this moment, we are unable to tell you The Royal Affairs Best Knights. But, we would strongly recommend you to invest the resources wisely. As you know, we can use scrolls or trait EXP/manual to develop the Knight’s stats. Since these items are limited and rare, you will have to use them wisely. Go to the Knights menu -> at the bottom of Knight’s portrait, you can check the main stat or role of a knight. The attack sign shows military role, book -> Scholastics, crown -> politics, and flower -> charisma.

If the knight’s main role is attacker/military, use it in the fights; campaign, PvP, union. And focus on its military stats rather than charisma, politics. If you go to the aptitude tab, under the trait, you can see the stats. The number of stars shows the best role for the knight. You can increase the level cap of a knight by promoting. Promotion items can be crafted, obtained from the events. Comment below if you want to share your own opinion on The Royal Affairs Knights!