In The Royal Affairs game, the player plays as a lord of a town and builds a team of knights, train troops to defeat the enemy cities. In addition to these campaign battles, the game also features tournament mode, union battles, and events. Additionally, there are lots of things you need to take care of; consorts, knights, heirs, marriages, hostages, council, and much more. If you have just started playing it and looking for a guide or tips, then our today’s post will help you; The Royal Affairs guide and The Royal Affairs tips, cheats & strategies!

The Royal Affairs Guide To Everything – Basics

⇒The game lets you progress through the campaign battles. That’s the way to unlock rich content like union battles, tournament(PvP). In the campaign battles, you progress through the chapters. And, In each chapter, you are challenged to defeat the enemy castle. Before you fight against the lord of an enemy castle, you will have to fight against the troops. 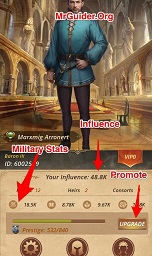 Complete the main quests to get troops for free.

Gold can be obtained from the trade, mall, as a quest reward, from campaign battles. Go to the council -> real manager -> manage trade to get gold. From the mall -> items -> you can spend gems for the taxation edict item. Additionally, complete the main quests, campaign battles for free gold.

You need gold to level up Knights.

How To Raise Influence

At the top-left of the main screen or on the lord screen, you can see the influence points.

In the tower, you can interact with hostages. Clear chapters in the campaign mode to acquire more hostages. Tap The Tower option on the main screen -> select a hostage -> tap on the character. You can get elixir, troops, gold, and much more from the hostages.

It will cost you reputation points. You get these points daily or earn from plot battles.

In the tournament or PvP arena, you fight against other players. In this mode, you select the best knights for the fight and rank-up, earn rewards. The player can raise the PvP skills by leveling up. 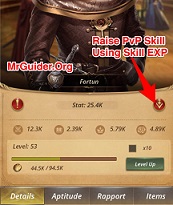 At the left side of the castle, you will find an academy building. Tap it and there you can send knights to study at the academy for 3h to get aptitude EXP and Skill EXP. At the top-right, tap the + icon next to the slots -> spend gems to unlock more slots. A new feature; Quick Study will get unlocked once you unlock 5 slots.

⇒You can use the Skill EXP to level up Knight’s PvP Skills. Go to the knights menu -> tap on a knight -> tap the red color button on the right side -> level up.

Go to the council screen -> there are two characters; one manages the realm while another one manages affairs. Tap the realm manager -> here you can manage trade, troops, and grain production. Then, tap the Manage button to collect the resources or troops. Tap the character who manages affairs -> here you can manage the affairs; all you need to do is choose yes or no. Choose “Yes” for rewards such as gold, troops, grain. Choose “No” for prestige points. If you are out of attempts, you can use approval seal. And, to get the realm attempt, you can use the work order item. These items can be obtained from the quests, events, union, and the mall.

We have already discussed it in the last post. Click here to read about town visit and how to increase chances of interacting with a lady.

The Royal Affairs Tips and Tricks: –

1.) Focus On The Military Stat

In The Royal Affairs game, the gem is the premium currency that you can use to buy a bunch of items in the mall; such as name change card, troops, gold, scrolls, and more. To earn gems, make sure to pay homage daily. To do that, tap the ranking option on your screen -> server rankings -> at the bottom-right, tap the pay homage button. That menu consists of three tabs; influence, plot ranking, and intimacy ranking. Visit all these three tabs daily and pay homage three times a day.

You can earn gold, scrolls, and gems for free(Daily) by earning 140 activity points. Once you have 140 activity points, you will get a big chest(Contains gems, scrolls, gold, prestige/ancient crest). Go to the main screen, tap the quest button at the bottom of the screen -> complete these quests to earn points. Tap the chest to claim the reward.

4.) Participate In The Events

The Royal Affairs feature amazing events such as the parade, pirates, and ranking events. Participate in all these events and earn points(As much as you can). You can redeem these points for precious or rare items and get the ranking reward. For example; Ancient Scroll, Gold Coupon, Ingredients to host the party in the banquet hall, and more.

We would recommend you to focus on the campaign battles in the early phase of the game and keep upgrading the knights as you progress. Always keep in mind that knights’ stats matter a lot. Level up them -> promote -> upgrade their traits and rapport skills. Don’t forget to read our knights guide.