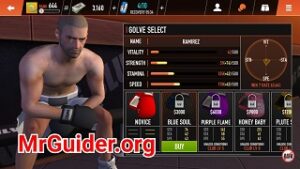 Boxing Club is a brand new boxing game for mobile by Enjoysports. Check out our Boxing Club guide, tips, cheats & strategy to strike down opponents

Enjoysports, the creators of Badminton Legend game, has just released a brand new boxing game for mobile devices “Boxing Club”. Boxing Club game comes with the ranking mode, practice mode, upgrading system, and features a variety of boxers. However, the game has not given too much importance to leveling up mechanics. All you can do is play the turns wisely to win the rounds. And if you are having trouble winning matches, then we are here to guide you. In today’s post, we have covered everything about the game you need to know as a boxer: Boxing Club guide and Boxing Club cheats, tips & strategy to guide to rank up in WBC.

Before you dive into the Boxing Club tips, cheats & strategy guide part, let’s learn the basics first. In Boxing Club, your main objective is to win the match as soon as possible. And there are two ways to win the match; earn more points than the opponent in three rounds or knock out the opponent in any round. We will go deep into the points system in the guide part below. For now, keep in mind that you can win even without defeating the opponent.

At the end of the match, if you win, the game will reward you with money and rank points. You earn few rank points even on defeat. As you gain more rank points, your club’s ranking will go up on the leaderboard and when you reach a certain rank(i.e. 800), you get a special reward; money, glove, and a boxer. You can spend money to buy better gear gloves, shorts, and boxer. And acquiring ranking points also increases your level. As you level up, you will be able to access more items; boxer, gloves, shorts.

Boxing Club game features simple touch and swipe controls. If you did not pay the attention to the tutorial, then here’s the detail: –

Well, the speed of attack depends on the boxer you have opted. When you start the game, it will ask you to recruit a boxer. Here are the stats of each boxer: –

You can pick any one of these for free. But later, it would cost you $6000(in-game currency). We would recommend you to go with Tabari or Marinho as both these boxers have good stamina and average speed. However, the choice is yours.

Money – You can use it to buy gloves, shorts, and the boxers. How to earn? Win matches in the competition mode. Energy – To play the match, you need energy points. By default, you have 10 energy points. So you can play 10 matches back-to-back. Energy refills automatically over time. So you don’t need to worry. So this is the basic Boxing Club guide for the beginners. Now, let’s take a look at our top Boxing Club cheats, tips & strategy guide to winning matches.

1.) Don’t Hit When Your Stamina Is At Dead Point 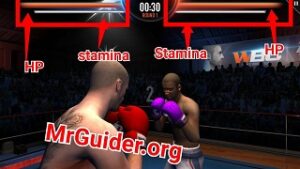 At the top of the match screen, there are two bars; orange and white. Orange bar states the vitality (HP/Health), white bar states the stamina. You lose the match when your HP reaches to the dead point. Stamina – Every time you perform a move, you lose stamina. You will deal more damage to the opponent when you have stamina. But when its low, your attack power gets reduced and you deal less damage to the enemy. In short, when low on stamina, defend yourself until you get it back.

Whenever you perform any action; jab, hook or uppercut, you lose stamina. We would recommend you to time your attack and perform only when needed. For example; the opponent is in the defending position and you are punching. It would be totally waste. You have to strike when the opponent is close to you and in open state(not defending).

3.) Defend When Low On Stamina

When low on stamina, don’t go for the attack as you will not deal a good amount of damage. In this situation, hold down your thumbs on both sides together to defend. And wait until you recover the stamina. On the other hand, if you are not defending, then it gives the opponent a chance to strike you.

In Boxing Club game, you can win the match even without striking down the opponent. In the basic guide above, we mentioned that there are two ways to win the match in Boxing Club game; Knock Off the opponent or earn more points. You earn points by hitting the enemy, dodging, punching, defense. At the end of each round, the game shows the scoreboard where you can check the points you have earned. And in each match, you play three rounds. If both the players failed to KO each other, then the victory will be given to the player with the most points(total points in all the rounds). How to earn more points? It’s very easy; hit the enemy, dodge attacks, defend.

There is a simple hack in this game – Attack when the enemy is not defending. Defend when low on stamina. Attack when you have enough stamina.

You can increase the boxer’s strength, speed, stamina with better gloves. On the main screen, at the top-right menu, tap the glove icon and this will take you to the gloves selection screen. You can buy high-quality gloves from here. To unlock more, increase your rank by getting the victory in the Boxing Club matches.

Tap the shorts icon on the top-right menu on the main screen and head to the shorts selection screen. From here you can buy shorts for the boxer and increase vitality, speed, stamina, strength.

6.) Increase The Reward Amount By Watching The Video Ad

Upon victory, the game rewards you with the money. You can increase the amount by watching a short video ad. You should accept this offer if you want to rank up fast on the leaderboard.

In Boxing Club, you can get energy and money for free watching a video ad. At the top-left menu, tap the + icon next to energy and money. Watch the video ad and get free money, energy.

8.) Keep Playing The Game And Rank Up

9.) Practice In The Practice Mode

It would be better to try out the practice mode to master the controls, learn to dodge, increase the skills. However, you will not get any reward from this mode.

So these are our top Boxing Club tips, cheats & a strategy guide to master the game. Also, see – Top new Android games of this month