The Basics – Get Started – Tokyo Ghoul re birth 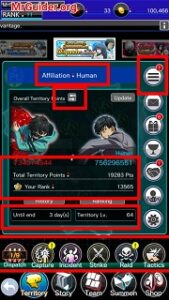 Before we head to our main guide, tips, cheats & strategy part, let’s learn the basics first. In Tokyo Ghoul re birth, you play as a human or ghoul(the affiliation process is automatic and your side(human/ghoul is assigned automatically each time the territory battle held). What is it? Tokyo Ghoul re birth is divided into two modes; story and territory. In the territory mode(incidents/dispatch/raid/strike), you play as a human or ghoul. We have explained everything about the territory in the guide part below. For now, just keep in mind that territory battles are co-operative battles(fight for the rank, contribute for your side by earning more points). And in the story mode, you complete the chapters and earn normal rewards.

At the top-left corner of the territory map, tap the points/ranking icon to check your territory points. Tap the ranking button -> proximity ranking -> there you can check your current rank.

To defeat the powerful foe, you will need to reduce its HP to 0 or capture more wards. Since its HP/attack stats are very good, you will need to upgrade the characters; upgrade weapons, unlock skills/abilities, mastery, train. And in all this process, you need a number of items such as the book of augmentation, weapon mods. You can obtain these items by getting victories in the incident matches, raid matches, by dispatching the characters.

In this part, we will learn about the territory(map, points, level, modes), characters, upgrades, mastery, battle guide/basics, RC points, selling, items farming, and much more. Pay attention to all the parts.

The battle held between ghouls and humans. The side with most territory points or captured wards at the end of the battle wins the match and all the players contributed in it(by acquiring territory points) gets the reward. Players with 0 territory points will not receive any reward as the game will not consider them as a participant. Let’s learn step by step.

How To Earn Territory Points?

You earn territory points by completing the raid challenge, getting the victory in the strike battle, by dispatching the characters to the wards and completing the incident challenges. Let’s learn about all: –

Once done, go back to the territory screen -> tap the dispatch option -> scroll down to the bottom -> there you can check the status; remaining time. You can complete it instantly by tapping the forced retreat button(it will cost you Kaku Gems).

To upgrade the weapons of characters in Tokyo Ghoul re birth, you need weapon mods. Weapon mods can be obtained by defeating the enemies in the incident mode. Go to the territory screen -> incident -> on the next screen, you will see the wards(where incidents have occurred). Tap the details button -> select a type(strength/red, speed/green, intellect/blue, light/yellow, dark/purple). Depending on the character’s type, you will need weapon mods. From some wards, you can also obtain the book of augmentation.

You will see an attack icon just above a ward if there is a strike ongoing. Or head to the strike menu to check the battle opportunities. In this Tokyo Ghoul re birth game’s mode, you compete with other players from all over the world for the medals(the number of medals determines the player ranking). Defeat all the opponent team’s characters to get the victory. You will be rewarded with precious rewards at the end of the event.

Win in a row to activate the win streak bonus(defeat the players back-to-back). As you play this mode, the Rc cradle bar’s gauge will increase and at the maximum points, you will be able to draw the rewards from the cradle. You can use a tactic item(read the tactics guide below) to boost up the awakening rate of cradles. 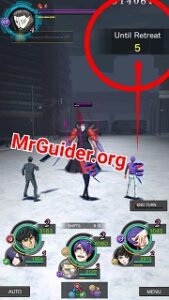 This is one of the best game modes in Tokyo Ghoul re birth game. In this mode, you fight against the powerful foe and earn territory points. To win in this mode, keep yourself alive until the last turn. Usually, to win in the raid mode, we have to stay in the battle for five turns. If you get successful in this mission, the quest will be cleared. Since the HP of the enemy is high in the raid mode, you can not defeat him. But you can reduce the HP by attacking in the raid mode. Note – The foe moves to the wards gradually and reduces the territory points. Tap the raid option -> details -> commercial raid.

You need souls to participate in the raid mode or strike mode. You get free souls every day. Each battle consumes a certain amount of souls. Souls regenerate gradually.

Well, the Tokyo Ghoul re birth game’s combat tutorial is enough for the beginners, but if you skipped it, then here’s all you need to know. Here’s the battle screen guide – 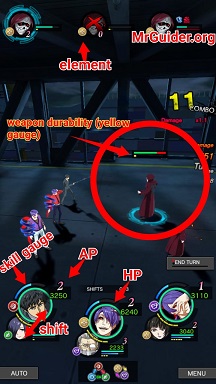 So this is the basic battle guide for the beginners. Now, let’s check out the characters guide.

There are five types of characters in Tokyo Ghoul re birth game;

Go to the team menu -> roaster -> at the top-left corner of character’s icon, you can check its type.

How to get characters?

You can summon characters using friendship points/Kaku gems/vouchers. In Tokyo Ghoul re birth, you can earn friend points by using another player’s character as an assistant(read the dispatch guide above for more info). Vouchers o/Kaku Gems can be earned as ranking rewards or on completing quests/achivements.

How To Earn RC Points?

RC points can be acquired by selling the useless characters. You can use these points in the shop for the stimulant, EXP book, and more rewards.

How To Sell Characters In Tokyo Ghoul re birth game?

Go to the team tab -> tap the sell button -> select a character -> confirm sale. In return, you will earn gold coins and RC Points. Read the RC Points guide above.

There are a number of ways to upgrade the characters; train them(level up, increase their mastery level, unlock skills), and upgrade the weapons. Let’s learn about all: –

You can use the book of augmentation to increase the character’s level or repeat the stages in story mode to grant EXP to the characters. Or play territory battle mode(dispatch the members to level up fast, defeat enemies in raid/incident mode).

Team -> upgrade -> select the character -> upgrade weapons -> upgrade. You can obtain weapon mods by playing the incident mode or in the shop.

Tactics or tactic items can be acquired by completing the achievements/quest/as a ranking reward. These items can be used to get an advantage in the territory battles. For example; EXP doubler is a tactic item that can be used to acquire the double EXP in the incident mode. If you have, then you can activate it. Tap the tactics button -> choose mode(incident, strike or raid) -> select the item -> confirm. The bonus effect lasts for a certain amount of time.

As you know, the game features an elemental advantage system; strength type characters are strong against speed type enemies. Read the characters guide for more info. In the battle, take a look at the enemies’ element and target the weak enemy to crush him asap.

By reducing the enemy’s defense to 0 or weapon durability(Read the battle guide for more info) to 0, you can activate the break bonus. This will restore the AP of all the characters and you will be able to strike more. You can reduce the weapon durability by targetting the enemy.

As mentioned above, characters placed in the backend gains health points after each turn. If one of the characters(frontend) is low on HP, replace him with the backend character. On next turn, that character’s health will increase. Or you can also save him from the enemy’s attack. Use the shift wisely. Replaced characters’ AP also get restored.

4.) Upgrade The Weapons To Unlock Skills In Tokyo Ghoul Re Birth

All the characters have some skills/abilities. By default, all the abilities are locked. Upgrade the weapons to unlock these abilities. Read the upgrade guide for more info. Unlock these skills to increase a character’s attack, defense, durability, and resistance stats.

5.) Farm Items In The Game Modes

So these are some basic Tokyo Ghoul re birth tips, cheats & a strategy guide for the beginners. Also, see – Tier list and rerolling guide