Brave Frontier The Last Summoner is finally out worldwide for mobile gamers and challenges you to build the best team of units. However, this one is quite complicated as compared to the original version of the game. And the reward system is also not too good. You will need to play different-different game modes to farm in-game items, to strengthen the units. And you can not even play these game modes endlessly; there is a certain limit on how many times you can farm the items from these modes and additionally, this one also has a poor energy system. If you are having trouble understanding the game’s mechanics, winning the matches, we are here to help you with our Brave Frontier The Last Summoner guide and Brave Frontier The Last Summoner tips, cheats & strategy.

Get Started – The Basics – Brave Frontier The Last Summoner

Before we head to the main guide, tips, cheats & strategy part, let’s learn the basics first. In Brave Frontier The Last Summoner game, the player builds a team of units to strike down the elite monsters in the story mode(story/harvest/challenge/challenge+) and in the arena. You start with the story mode and complete the chapters. You can play a chapter in three difficulty modes; harvest(medium), challenge(hard), challenge+(Extreme). The liquid in-game items are Zel(you can use it to upgrade the attack skill power, unlock the skill), karma(use it to fuse or level up the units), orbs(to obtain more units/characters), crystals(to evolve the units).

Additionally, there is one more character class; spirit. Some units have summoning skill. Using it, they can call the spirit in the battle. For example; Alya can summon Mmetes in the battle. To unlock this summon skill, you need to unlock the unit’s role. Check out the main guide below for info. 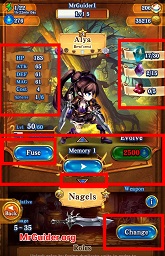 In this part, we will learn about the roles, units’ skill, items, upgrading, fusing, evolving, weapons, and much more. Let’s dive in!

The very first step you have to do in Brave Frontier The Last Summoner game is playing the Karma Prade mode and earn Karma points. Once done, check out the inbox(you get metal god; fusing items/leveling up items as a newbie reward). Go to the units tab -> select a unit to increase its level -> there are three ways to increase the unit’s level; play the story mode and repeat the stages(earn EXP), use metal items(metal god or lower-rank) or sacrifice the low-rank units.

On the unit’s profile page -> tap the fuse button -> select a type; upgrades or units. In the upgrade tab, select the number of metal items -> upgrade. It will cost you Karma(earn from Karma parade). In the units tab, select the units(as material – you will lose the units, select low-rank units; 1*, 2*).

Once you reach the unit’s maximum level, you will be able to evolve that unit. Let’s check out evolve guide.

The game allows you to evolve the unit after increasing its maximum level. Prior to it, you need to complete the memories. Head to the unit’s profile page(unit should be at its max level). Play the memory by tapping the play button(tap the arrow icon to select next).

You need karma, crystals to evolve the unit. Crystals can be obtained by playing the crystal parade mode(go to the quest tab -> scroll below -> search for crystal parade).

The weapon is one of the main items in Brave Frontier The Last Summoner game. You can farm weapons in the weapon parade mode or play the story mode. Depending on the weapon’s quality, your character deal damage to the enemies. So always equip the best weapon for your unit. Go to the units tab -> tap the unit -> on the next screen, tap the change button -> select a weapon(to get details, tap the (i) icon on the same screen) -> OK. Or go to the items tab -> weapons -> tap on an item for more info.

By default(when you obtain a character through summoning), a unit comes with one random role. And as you know, all the units have some skills. These mechanics are co-related. To unlock more skills of a unit, you will have to unlock roles. For example; a unit has a leader role, then there would only be one unlocked skill; leader skill. To unlock more skills; brave burst/summon/brave guard/brave support, unlock the roles. Here’s the tree chart: –

How To Unlock The Roles?

Use the identical units in the fusing process to unlock the role. For example; Alya is a character in Brave Frontier The Last Summoner game. To unlock her roles, we need duplicate unit(Alya). Obtain the units using orbs(go to summon tab -> summon). You can earn orbs from the story mode, events.

You will be able to purchase ascend skill sphere once you unlock all the roles.

You can summon the characters for free once a day or you can purchase(1*, 2* units) using the Karma in the summon menu. Or if you have orbs, then spend. Or play the story mode(story/harvest/challenge/challenge+).

Don’t waste your resources on 1* units; meaning, don’t develop them. Focus on the 3* or higher rank units. The reason is these low-rank units are not too helpful in the long run. And you need to upgrade them a lot in order to make them well strong enough to strike down the elite monsters.

2.) Must Include A Healer In Your Team

A Healer unit’s healing skill will help you in the battle in restoring the allies’ HP. If you have a unit having the healing skill, then make sure to add it to the team. How to check? Go to the unit collection menu -> tap the unit -> scroll down below in the unit’ profile page to check its skills. 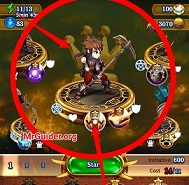 In Brave Frontier The Last Summoner, most of the units have leader skill(obviously, you will need to unlock their leadership role first). You should appoint the team’s leader wisely as its leader skill impacts all the team members. For example; Alya’s leader skill can boost attack and HP by 30% for dark units. What is dark, thunder, fire, water? Read the 5th point below to know. Head to the unit’s profile page to check its skills.

4.) Farm In The Various Items In Game Modes

The game runs events periodically and allows the player to farm items; crystals(evolving material), karma, zel, and more. Pay attention to these events and participate in them before the due time. For example; there is an event going on; Night of the hunters of Teelandia in which the players can earn crystals of Hunter. These crystals can be used to summon the characters.

You can check the unit type(icon) at the top-left of their icon. Fire(Red), Light(white), Dark(purple), Thunder(gold), water(blue). How to take advantage? For example; the enemy’s type is water. If you attack with a thunder type character, then you will deal bonus damage. On the other hand, if the enemy’s type is thunder and the character’s type is water, you will deal less damage to it. You can target a specific enemy by tapping it.

6.) Repeat The Stages, This Is The Only Way To Progress

If you want to level up fast, then don’t forget to repeat the stages. Play the harvest or challenge mode over and over again for more rewards; the higher the difficulty level, the better rewards you get. But since it’s difficult to win in these modes, level up the units(fusing), upgrade the skills, and equip better weapons. 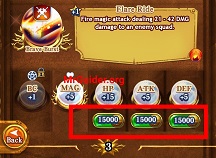 Zel is an item that you can use to increase the stats of skills. Indirectly, it will increase the unit’s stats. So if you have enough Zel, then make sure to upgrade the skills. 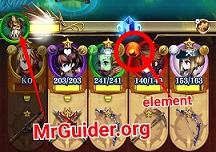 As mentioned above, some units have a summoning skill. Fill its gauge by dealing damage to the enemy. When full, hold down the unit icon and slide right to cast.

So these are some Brave Frontier The Last Summoner tips, cheats & a strategy guide for the beginners. Also, see – Top new Android games of this week