Brave Nine is a brand new strategy game for mobile by Neowiz. Check out our Brave Nine guide, tips & strategies – for novice players

In Brave Nine game, characters or mercenaries attack the enemies and use their skills automatically. The challenging part is to deploy the right units and configure a good formation to strike down the enemy team. The game features campaign mode, PvP modes, guild mode, and challenges mode. You earn a variety of materials from these game modes to develop the team members. In today’s Brave Nine guide and Brave Nine tips part, you will learn all the basic aspects of the game that you need to know. But, before you dive into this guide, there are some things that you need to know: – 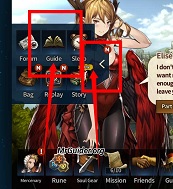 On the left side of the screen, tap the side menu button -> tap guide -> here you can check the tips, basic formations, strategies, skills, resource farming guides, battle modes guide, and much more. It would be better to read this in-game guide to learn all the basic aspects.

Formation – On a tactical board, with three lanes, the player deploys the top mercenaries to slay down the enemy’s team group like a terminator. The very first step you have to do is selecting the characters and building the best formation. It’s always good to deploy the defenders in front to protect the DPS and supporters.

First, tap the load formation button on the screen -> select an empty slot -> tap the deploy button -> drag the mercenaries on the battlefield. When you are in the deployment screen, at the top of the screen, you can check the maximum cost. All the characters in Brave Nine game have a different deploy cost. You can check it on their icon(at the upper-left corner of their icon). Once you have reached the maximum cost, you will not be able to deploy more mercenaries. Once you are done, hit the save formation button and start the battle.

Attack Order -> Attack Order is another one of the key concepts in Brave Nine game’s battle mechanics. Before you start the battle, you can change the attack order; the order in which your units attack. Tap the attack order button at the bottom-left corner of the battle preparation screen -> reset order -> tap the units in attack order. It would be better to let the attackers(High DPS) attack before other units. In some cases, you should let the defenders attack first to make use of their powerful skill.

In the deployment screen, when you select the character; the game will show you some information; for example; 1R, next unit, 2R, skip, and more. What’s the meaning of these abbreviations?

How To Get Mercenaries

To recruit the mercenaries, tap the shop button in the lobby -> recruit -> here you can see all the ways to summon the characters; normal, class, friendship, mileage, legend, diamonds, premium-scroll, and more. On the same screen, at the upper-left corner, tap the book -> here you can see the full list of characters featured in Brave Nine game. Tap on any locked unit -> at the top of the screen, tap the obtain button -> it will show you the way to obtain selected mercenary. For example; legend summons, premium summons, friendship summons, and more.

How To Make Mercenaries Stronger?

These are the ways to increase the stats of a mercenary in the Brave Nine game. Let’s learn about all:-

Leveling Up -> To level up a mercenary, you can use slime or add him/her in your team. When you win the campaign battle, the game grants a huge amount of EXP to the team members. Slime can be obtained from campaign modes, event dungeon, missions. In the slime method, go to the mercenary menu -> select the mercenary -> level up -> use slime or other useless characters.

Runes -> You can get rune pieces from the challenge mode(rune temple). Once you have enough pieces, you can summon a rune. As you progress a bit more in the rune temple more, you will get better runes. To summon a rune, tap the rune option at the bottom menu in the lobby -> go to the rune piece tab -> select the rune -> summon. You can upgrade the runes, rank-up runes to grant more power to a character. There are many types of runes; vital, shield, fatal, rage, and assault. All these runes provide different stat boost to the character; HP, attack, and more. Go to the rune tab -> select the rune -> enchant -> increases the rune stats. Tap rank-up to develop it further.

Costumes -> Special costumes provide a special effect. You get the costume from the shop.

Rank-Up -> If the character has reached the maximum level, you can rank-up him/her to increase the max level cap. To rank-up a character, you need a mercenary with same star rank or same rank material. Go to the mercenary menu -> mercenary -> scroll down -> rank-up -> select the material items -> rank-up.

Awaken -> To awaken a unit, you need crystals and gold. You can obtain crystals through the challenge mode(crystal cave) or from missions, quests, events.

So this is the Brave Nine guide for novice players. Make sure to read the in-game guide too. Let’s check out some Brave Nine tips & strategies!

To grow mercenaries, you need a number of items. You can farm every single item by playing different-different game modes;

2.) Focus On The Hot Mercenaries

Brave Nine game features hundreds of mercenaries. But not all the units are great. All these mercenaries have unique skills, stats, and different role; warriors are attackers, defenders protect the allies, magician have special buff/debuff skills, supporters can heal the allies. It would be better to focus on the top class characters rather than building low-grade units. You can check the Brave Nine tier list here.

Balanced Team -> Make sure to deploy defenders to protect the allies, warriors and magician to attack/apply buffs/debuffs. And, supporters to heal the allies. All you have to do is audit the mercenaries list in the mercenary menu. There you can check the mercenary skills.

Read skills -> As mentioned above, In Brave Nine, all the mercenaries use unique skills to crush the enemies or to shield allies or support allies. Make sure to read the skill details of all the team members to assign a perfect attack order.

Attack Orders -> Setting a good attack order is a must. You should do it the right way. Your target should be eliminating the most powerful enemy unit first. Let the high DPS character attack first.

It would be better to read the strategies in the in-game guide.

You can repeat a stage that you have already completed with 3*. Tap the repeat battles option on the battle preparation screen -> this will help you in farming gold or other items.

Complete all kinds of missions, quests, and events to claim all the free stuff.