Castle Crush is one of the best strategy games for Android in which the players from all over the world battle against each other and compete in the tournaments for the top rank. Apart from the 1v1 Real-Time battle mode, the game also features these game modes; friendly battle, daily events, and the tournament. Additionally, there is a large variety of characters that a player can add to the deck. Today, In this post, we have covered everything about the game you need to know as castle crusher; Castle Crush guide and Castle Crush tips, cheats & strategy guide.

The Basics – Castle Crush – Get Started 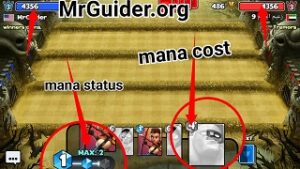 Before you dive into our tips, cheats & strategy game, let’s take a look at the basics first. In the castle crush game, your main objective is to destroy the enemy’s castle as fast as you can. Both the parties can deploy troops to any lane; there are three lanes. The challenging task is how you manage the mana. Mana is a power that you use to deploy the troops. And the cost(mana cost) varies. At the start of the battle, both parties start with 0 Mana points. The mana refills gradually(automatically). As you progress, the capacity of mana you can hold at a time gets increased. Since it takes time in regeneration, the player has to deploy the troops effectively.

At the top-left corner and at the top-right corner, you can see the HP of castles. The HP of castles gets reduced as it gets hit from the enemies. Your task is to defend the castle from the enemy and to win the battle, crush the enemy’s castle as fast as you can. And getting victories in the Castle Crush game is not easy. You have to build the best deck and implement a good strategy to win the battles.

After getting the victory, the game rewards you a chest. This chest contains troop cards(characters), spells, coins, and gems. And from this chest, you could get a new card(character) or an old(that you already have in the collection). You can use the duplicate cards in upgrading.

Gold and Gems are two main in-game currencies in the Castle Crush game. You can use gems or diamonds in the store to buy card packs. And use gold to upgrade the cards, buy the cards from the store. So this is the basic Castle Crush guide for the beginners. Now, let’s take a look at our Castle Crush cheats, tips & a complete strategy guide.

1.) Pay Attention To The Characters’ Attributes When Recruiting

The four attributes of a character determine how he/she performs in the battle and how the player can use it efficiently against a weak troop. These attributes are attack power, health points/hit-points, speed, and range. Head to the deck and tap on a character -> tap the info button. This will show you the stats of a specific character. Based on these stats, you have to build the deck. Here’s how: –

How To Build The Best Deck In Castle Crush game?

It’s very easy! All you need to do is include all types of unit; defenders(characters with high Health points), attackers(melee and range), and two spell cards. If you are on castle 5 or high, then must include healing spell card. Just keep in mind that: –

Castle Crush game features a practice mode. In this mode, you play against AI. However, you will not get any chest or lose or gain trophies. But it’s worth playing to test out the deck before trying against real players in the rank battles. Tap the practice mode icon on the main screen, bottom-center.

As you know, both the parties have 0 Mana at the start of the battle. But it fills up quickly and allows you to deploy the unit that costs 1 or 2 mana. You can check the mana power/points a troop requires to fight against the enemy on the top-left corner of their icon. Here’s how to win battles in castle crush game: –

Always keep the defenders ahead. Because they have good HP stats and they can block the enemy’s movement until their last breath. Just behind the defenders, deploy ranged class characters. But make sure to deploy far from the enemies. Becuase almost all the ranged class characters have poor HP stats. And they can not even stand against melee type enemies. But since their attack power is awesome, they always contribute to the victory.

There are three lanes; don’t deploy all the troops in a single lane. Because the enemy can use spell and crush all the characters in a single attack. Push the enemy team from all the lanes. If the enemy is using the same strategy, then try out this one: –

In short, analyze the enemy’s turns and deploy a strong character against their choice. Now, here comes the luck point. Because, In the castle crush game, you get random cards from the deck.

4.) Join A Clan And Request Cards

Once you reach the castle level 3 in Castle Crush game, you will be able to join a clan. Join an active clan. There are a number of benefits; you can request cards(other members can donate cards to you). Play against other members in the friendly match to know the weakness.

5.) Fill The Piggy Bank To Get Rewards

Head to the store menu in Castle Crush game. There would be an option; a piggy bank. You can open it in exchange for gems. This piggy bank contains; gems, cards, and gold. Just tap it to get the rewards info. Usually, you get the gems back(even more than you spend to open it). The level of the piggy bank gets increased as you open it over and over again. To open it, you need to fill it. How to fill? Collect the cards from the chest to fill it. If it is full, then open it using the gems and collect the rewards.

6.) Upgrade All The Cards To Upgrade Castle

If you want to upgrade the castle, then you need XP. And XP can be obtained by upgrading the cards. Whenever you upgrade a card, the game grants you a little amount of XP. What is the benefit of upgrading the castle? Answer; unlock new cards, to increase the HP of the castle, to unlock tournaments.

7.) Pay Attention To The Card Deals

You have limited chest slots. And if you have assigned the chests to all the slots, you would not get any chest. But it does not mean to stop playing. You always get the coins upon getting the victory. Use these coins to buy cards in the store.

8.) Participate In The Tournaments

After reaching the castle level 5, you will be able to join tournaments. Participate in these tournaments to get free rewards. You can earn even more if you hold the place in under 50 list.

So these are our top Castle Crush tips, cheats and a complete Castle Crush guide for the beginners. Also, see – Best strategy games for Android