Clicker Knight is an awesome unique RPG by Burnt Games, published by Iron Horse Games LLC. In the game, you play as a knight and fight against monsters in unique worlds. The game features an Idle system in which your knight attacks the enemies automatically, you can increase his attack speed by tapping the screen and power by upgrading the spells, weapons, and brewing the powerful spells to earn more/damage more. If you are having trouble understanding the game’s mechanics, then we are here to help you. In this post, we have shared a complete Clicker Knight guide and some basic Clicker Knight tips, cheats & strategy for the beginners to ascend fast.

Before you dive into our main guide, tips, cheats & strategy part, let’s learn the basics first. If you have ever played other Idle games, then it would be easy for you to master it. Like other games, this one also features ascend feature(prestige). After earning 2 ascend points, you will be able to reset the world progress(gold, weapons, armors) for permanent perks(ascend).

Another highlighted feature of Clicker Knight is pet system. The game features a variety of pets and all the pets grant various boosts to the knight. You can equip multiple pets by increasing the knight’s level. Rest mechanics are as same as other Idle games; earn gold, unlock worlds, defeat the boss, upgrade the gears, and unlock talents. So this is the basic Clicker Knight guide for the beginners. Let’s head to main Clicker Knight guide and after it, check out Clicker Knight tips, cheats & strategy.

In this part, we will learn about pets, upgrade points, talents, gears, boss, world, ascend, and much more. Let’s dive in.

As you kill the enemies, your knight gain EXP. At a certain level, his level will go up. When the knight’s level gets up, you earn upgrade points. You can use these points to increase the knight’s stats; HP(health), damage power, and magic power. Additionally, you earn a talent point. You can use this point to unlock or upgrade the knight’s talents; attack, magic, wealth. We would recommend you to give priority to wealth talents and keep a balance in attack/magic talent tree. 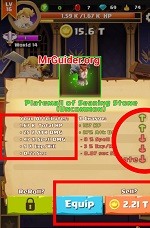 On the main screen, at the top-left corner, tap the hero icon -> head to the pets tab. There you can see the details of pets. You can acquire pets by playing the daily dungeon mode. In the daily dungeon mode, you fight against the waves of enemies. The difficulty level depends on your current progress. You can unlock this mode by using the prestige feature(Ascend).

Ascending is one of the main features in Clicker Knight game. It will reset the game’s progress and you will earn ascend points. You can use these points to unlock the talents(Ascend). At the bottom of the screen(menu), tap the talents button(star) -> ascend -> there you can spend these points. Additionally, you also gain a small boost in stats.

You can use this feature once you have two ascend points. On the main screen, at the top-left corner, tap the sword icon -> begin ascend. Depending on the current progress/perks, you will start strong again.

How to earn ascend points?

1.) Collect The Gems And Craft Potions 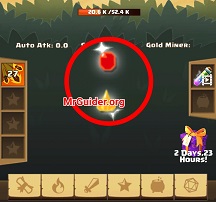 2.) Collect The Free Gift From The Store

You can collect a bag of coins every two hours. Head to the store -> 2-hour coins. Depending on the current progress, you get the reward.

You can spend these points on unlocking and upgrading three types of talents; attack, magic, and wealth. Since there is no talent reset option, you will have to spend these points wisely. We would recommend you to invest in the wealth talent as it will increase the earnings and you will be able to upgrade the weapons easily. Investing in attack talent will increase the damage power, magic talent unlocks spells, increases spell damage/power/rate.

4.) Upgrade The Pets To Increase Their Impact

If you have a pet, then make sure to upgrade it. For example; Amemon is a pet who heals the Knight over time. Upgrading the pet increases its stats. On the main screen, at the top-left, tap the hero icon -> pets -> select that pet -> upgrade. You can equip multiple pets at level 30, 60.

You can play the daily dungeon mode once a day and earn precious rewards. There is another option too; extreme dungeon mode. Watch the video ad to play it. In this mode, you fight against elite monsters and earn better rewards. If your knight’s power is healthy, then you should give it a shot.

In the brewing tab, you have some ad offers; watch the video ad to obtain a powerful potion; EXP booster/Attack Booster, and more. Brewing a specific potion for a certain number of times rewards you a free gift.

So these are some basic Clicker Knight tips. Also, see – Best Idle games for Android