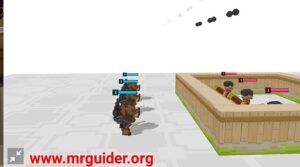 Craft Warriors is an amazing addicting strategy game for mobile devices, the game in which you build your own town, restores facilities, and attack enemy base with best characters. Check out Craft Warriors characters and know how to change the deck

Within a month, Craft Warriors has crossed over a million downloads on Google Play Store. The main reason behind its success is its crafting/building/strategic gameplay, and customization features. The game also features a dozen of characters and in this post, we have listed all the Craft Warriors Characters.

Warrior comes under the attacker category. He uses a sword as the weapon and his speed is fast. Attack range – Melee.

Lancer is also an attacker unit. He uses a spear as his weapon. Speed – Normal. Attack Range – Melee.

Archer is a supporter unit in Craft Warriors game. Archer can attack from a distance. He uses a bow and arrow as his weapon. Speed – Fast.

Buckler is a tank unit. HP of all the tank characters in Craft Warriors is high as compare to other types of characters. He uses a shield to reduce the attack and the sword to take revenge. Speed – Slow.

Samurai character is another attack unit. He uses his sword to attack enemies. Effective against grouped targets and shields.

Ninja is a support type character. He can climb walls and uses his claws as his weapon. He is quick in his job and performs like a real ninja.

Bandit is among best attack type Craft Warriors characters. He uses his axe as to attack surrounding units. Bandit unlocks at player level 4.

Grenadier is a specialist character in Craft Warriors game. He can attack from a range. He uses the grenade as his weapon. Grenadier unlocks at player level 4.

Wall Breaker is another specialist character in this game. He can destroy walls by placing the bomb near it. He is best in attacking walls and defense towers.

The name says it all. Bomber is a specialist unit and uses the bomb as his weapon. His damage is so powerful. He sacrifices himself to deal great damage to the enemies. Bomber unlocks at player level 6.

Paladin is a tank type character. Since it is an attack unit, HP is very high. He uses his shield to defend from all kinds of attacks. His shield can reduce damage and defend against poison attacks. Paladin character unlocks at player level 6.

Fire Archer character is better than normal archer as she deals more damage to the enemies by shooting multiple units. The flame arrow shooted by her will continue to damage enemy units for a certain amount of time. Fire archer unlocks at player level 7.

Berserker is an attacker unit and my favorite character in craft warriors game. His HP restores automatically after being attacked. And his attacking power and speed attributes are also good.

Assassin unlocks at player level 8. He uses his poisonous claws to attack enemies on the battlefield. He can also climb walls. The more he attacks, the more damage he can cause.

Titan is one of the main characters in Craft Warriors game, Unlocks at player level 9. His HP and attack damage is good.

Blast Gunner is a supporter type character. He uses a powerful gun to attack multiple enemies. Blast gunner is a blaster! Unlocks at player level 9.

The launcher is another attacking unit in this game. A cannon is on his back and he fires bombs. He can attack from a range and over walls.

Along with these Craft Warriors characters, there are cubes too.

So, these are the characters featured in Craft Warriors game. These numbers could increase if updates add the new characters. Also, see – Best strategy games for Android(Offline and Online)