Elex, the mobile games publisher behind Food Fantasy, has just released a brand new game called Crime Kings: mafia city. In this game, the player creates a team of gangsters(heroes) and fights the enemies in the city to become the boss of the underworld! In the city, you get to build the base and the facilities like Villa, Black Market, Bar, Assembly, Port, Underground Den, Robbing, etc. where you are gonna do criminal activities!

Your goal in this game is to build the best team of gangsters. There are lots of heroes or gangsters that you can add to the party to slay down the enemies in the city and become their boss. You will progress through the chapter mode which features lots of deadly stages where you fight the other gangs and earn rewards like golden bullets, hero experience, greenback, and other in-game items. As you complete these chapters’ stages, new functions in the game will get unlocked; for example – trial, port quest, underground den, etc. Also, keep in mind that the stages’ difficulty level also increases as you further progress through the chapters. So you will have to power up the heroes and increase their strength. Let’s learn everything in detail and explore all the Crime Kings: mafia city tips & tricks: –

Learn How To Get Heroes

Heroes or Gangsters can be obtained from the archive menu in the game. Tap the building option in the bottom-right side -> archives -> there you can summon the heroes using the tickets; normal summoning tickets and secret summoning tickets. Also, you can use the diamonds for secret summon. These tickets can be obtained from daily quests, weekly quests, sign-in reward, black market, etc. 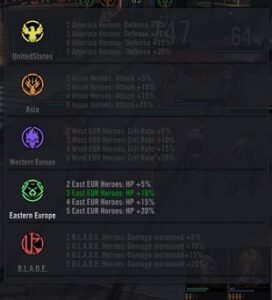 Get Familiar With The Faction System

In Crime Kings: mafia city game, heroes or gangsters belong to one of these factions: –

If you add a certain number of heroes from a particular faction, you will get the faction bonus in the battle. For example – add 2 Asian heroes in the team to get a +5% attack buff. Before you begin the battle, tap the faction icon at the top of the screen to check the faction bonuses. Head to the gangster/hero menu to check out the complete list of heroes that you have obtained so far.

There are different types of heroes in the Crime Kings game – each with unqiue abilities, stats, and role. For example – heroes with Regen. Vocation can heal the allies during the battle with their abilities. AoE type heroes can inflict damage to multiple enemies with their attacks.

Head to any hero’s profile through the hero menu -> tap the vocation icon below the name of the hero to check his/her role. We strongly recommend you to add a hero with regeneration/healing ability so that you can heal the allies during the battle.

On the right side of the hero profile menu, you can check the skill information; tap on the skill button to check the details. During the battle, you can use these skills to get the most out of heroes.

Get The Idle Rewards In Crime Kings: mafia city

The best thing in this game is it features an idle system – so you can grind rewards like weapons, XP, golden bullets, greenback, etc. offline. On your screen, tap the lady in the bottom-right corner to collect the AFK/Idle rewards.

Power Up The Heroes

It’s important to make the gangsters powerful to defeat enemies in high-difficulty modes; let’s take a look at all the ways to make Crime Kings game heroes stronger: –

You can earn diamonds or summon cards by completing the medal of trial quests. In the top-left side, tap the medal button(below the stage info) -> there you can check the quests to complete diamonds.

Red Roses, Golden Bullets, Hero Shards, Summon Tickets, Greenback, etc. are the rewards that you can obtain by completing the daily and weekly quests in Crime Kings: mafia city game. Tap the gun option in the bottom-right side footer menu -> there you can see all the missions that you must complete for these lucrative rewards.

Head To The Villa To Interact With Beauties

In the Villa, you can interact with the characters; tap the gift button on the bottom-right side -> give them gifts to increase the heart/love level. These characters grant bonus attributes to the team. At the top-right corner, you can check the name of the character, heart level, progress and bonus team attribute info.

Dispatch The Characters On Bar Quests

Shards, Golden Bullets, Greenback are some in-game currencies that you can earn from the bar quests. In these quests, you need to dispatch the heroes of certain factions and they will bring rewards once the expedition time has been completed.

In the port quests, you can trade the resources for in-game currencies. Port Quests unlock after you complete the 6-12 stage in the chapter mode. For example – Munitions, Drugs, Gold Bars are some resources that you can trade for rewards like EXP, hero shards, etc.

Get The Online Reward In Crime Kings: mafia city

In the top-right corner, near the mailbox icon, you can claim the rewards every few minutes.

So this would be all in this post on Crime Kings: mafia city guide, tips & tricks for beginners.