Banditos Studio has just released a challenging RPG for Android on Google Play Store, named as Five Heroes: The King’s War(5 Heroes). The game features a simple battle system in which you strategically move the heroes to tiles and use their special skills to defeat the enemies. The map is full of treasure but protected by the evil gangs. The king has appointed you to hunt the treasure with the team of 5 heroes. If you are having trouble winning the matches, understanding the game’s mechanics, we are here to help you. In today’s post, we have covered everything about the game you need to know as a beginner; Five Heroes: The King’s War guide and Five Heroes: The King’s War cheats, tips & strategies to build the team of best 5 Heroes.

Get Started – The Basics – Five Heroes: The King’s War Guide

Before we dive into the main guide, tips, cheats & strategy portion, let’s take a look at the basics first. In Five Heroes: The King’s War game, your objective is to defeat the skeleton king. These skeletons are spawn in random locations and appear over time. You must defeat them to progress or explore a larger part of the map by clearing the fog. The game starts with a tutorial in which you learn how to play the game, recruiting, moving, healing, reviving, and more. Let’s learn step by step.

The very first step you have to do in Five Heroes: The King’s War game is selecting a hero, out of three available. These three heroes are; Barbarian, Paladin, and Knight. We would strongly recommend you to choose Paladin or Knight as you will get a bowmaster(hero, archer type) in the first phase of the game. The reason behind choosing Paladin as your first hero is he can restore the health of an ally. However, you can purchase the priest from tavern for 5,000 gold coins. The priest also has the ability of healing. But to unlock the tavern feature, you need to clear the path to the castle. It is captured by the skeletons. And Knight would be a great hero to choose as its damage and defense skills are great.

After clearing the path to the castle, you will be able to enter the King’s citadel/castle. From there you can access features such as the arena, barracks, tavern, and more. You can recruit the heroes at the tavern facility in the castle. And you can add up to 5 heroes in the team.

In this part, we will learn about the potions, gold coins, healing, reviving, recruiting, upgrading, and much more.

If in the battle, your hero has been injured, then you will need to heal him/her as health would not restore automatically. There are two ways to restore the health of heroes; go to the Inn(Hospital) and use the green healing potion(on the main screen, at the bottom -> tap the travel button -> farmer’s flat -> Inn-> there you can heal the allies). This green color healing potion can also revive the dead hero. 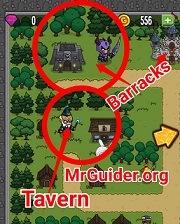 In the king’s castle, near the citadel, tap the barrack building(near the guard commander). In the barracks, you can train the heroes’ attribute. How? You need training points to upgrade the attribute of heroes in Five Heroes: The King’s War game. When a hero level up, he/she gains training points. Go to the barracks -> tap the hero -> at the top-right corner, you can check the number of training points hold by the hero. Head to the upgrade tab(green arrow) -> there you can upgrade the hero’s attribute. It will cost you gold coins.

By default, you have only one hero and you will get one more in the first phase of the game. You can obtain more heroes at tavern facility. Head to the King’s castle map -> there would be a Wizard character -> just near him, there is a tavern facility. Tapping the tavern building will open the character’s screen. You can obtain these allies for gold coins. How to obtain gold? Hunt the treasure chests, defeat the skeletons, complete the quests, watch the video ad.

By linking the game to your Facebook account, you will be able to challenge the friends in the arena mode. Go to King’s castle -> there would be a stadium. Or fight against the random hero. Tap the stadium -> at the bottom, tap the battle icon.

1.) Make Use Of Auto-Play If You Are In Confusion

Five Heroes: The King’s War game’s autoplay mode is a good way to deal with enemies when the situation is out of control. In the battle, at the top-right corner, tap the attack(the blue color button with attack symbol) icon to activate the auto-play mode.

If all the heroes have been injured and you don’t want them to lose(as you need green color potions to revive the heroes in Inn), run away! In the battle, at the top-left corner, tap the dash button(the blue color button with exit symbol) and spend some coins(fight another day) or retreat to fight again by watching the video ad(if available).

Before you try out the arena mode, make sure to power-up the heroes. Head to the barracks facility and upgrade the heroes’ attribute; damage power, health, speed, and more.

4.) Take A Break And Repeat

Skeletons on the map, after getting killed, respawns in the same place over time. If you have killed all the skeletons on the map(with low power), then take a break and come back later. These skeletons and chests respawn after every certain amount of time. Repeat the fights and earn more money.

5.) Collect The Treasure From The Battle Screen

Sometimes, in the battle, the game lets you collect the bag of coins and XP(required to increase the hero’s level). If the battle screen features these rewards, then head to the reward tiles and collect the reward ASAP. Level up the hero and earn training points. Use those points to upgrade the heroes at barracks.

6.) Double The Amount Of Reward

On the reward screen(After the battle or opening the chest), you get the ad offer. Tap the X2 green color button to watch the video ad and double the amount of the reward.

7.) Trade With The Merchant

In almost every fight, your heroes will take damage by enemy attacks. In order to heal them, you need red potions. You get these potions for free from the chests(protected by the skeletons). But chances are very low. So spend some coins to purchase the red potions from the merchant.

You can add up to five heroes in the team. But in the early stage, you have two or three. Collect and save the coins. Head to the Tavern and pick the best heroes. Or go with the quests.

On the main screen, at the bottom, tap the quests tab and check the missions. Completing these missions will grant you EXP, rubies, and coins. You can use rubies to obtain the gold. At the top-right, tap the + icon next to gold to enter the store.

So these are our top Five Heroes: The King’s War cheats, tips & a strategy guide for the beginners. Also, see – Top new Android games 2018