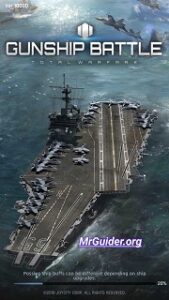 Gunship Battle Total Warfare is the latest MMORTS from the creators of The War Of Genesis game. The game challenges you to build the best naval base and destroy the enemies by building the best fleet of ships, best jet squadrons, increasing the admiral’s power. You will build, upgrade, craft, join rallies, and dominate on the dangerous world map where there are loads of enemies, players’ base, and as soon as you cross HQ level 7, enemies will be able to target your base. If you are having a problem understanding the game’s mechanics, then our Gunship Battle Total Warfare guide and Gunship Battle Total Warfare tips, cheats & strategy will help you!

The Basics -> In the Gunship Battle Total Warfare game, the player builds a number of facilities on its base; to produce resources, build Jets/Missiles(for defense)/Ships/Tanks. Resources; food, iron, oil, silver are required to build, upgrade Buildings/Ships/Tanks/Missiles. Once you cross the HQ level 7, you will lose the shield. And, enemies will be able to attack your base. If they get successful in the attack, you will lose the unprotected resources. So increasing the defense, Admiral power is much important.

Similarly, you can destroy enemy ships, loot resources by attacking their base.

VIP System -> Like other MMORTS games, this one also features a VIP system. The VIP level is different from the admiral level. You enjoy a certain number of buffs at certain VIP levels. For example; VIP level 3 increases resource production, ship ATK, research speed. You need VIP Points to increase this VIP level. Sometimes you get these points by completing the quests, daily tasks, event missions.

Additionally, the game allows you to convert gold into VIP points and lets you increase the VIP level. So don’t spend gold in any other task(Such as speeding up construction, upgrade).

Attack Guide -> Tapping the globe button at the bottom-right corner will send you the world map where you can find resource sites(oil, food, iron, and more), enemies, players’ base, alliance. To attack, you must build the ships/jets/tanks first in the Jet factory, Shipyard, Armory. And, before you attack a base, make sure to scout. Scouting will provide details of that base; if the base is strong, then don’t attack.

From the resources sites, you can earn loads of resources. For example; from the oil site, you can hunt the oil. All you need to do is send the ships to that site. Once collected, recall the ships(tap the return button by tapping that site).

By attacking the armada base, you can earn loot boxes. These boxes contain many items; resources, silver, blueprints, material, and much more.

Rally Attack -> When you tap a base, you also get the rally attack option. To use this feature, you must join an alliance. Rally Attack feature lets you join other alliance members to target a single base. After tapping the rally attack option, choose the time limit; within this limit, alliance members can join your fleet. If the target is very strong, then this feature helps a lot.

Depot In Gunship Battle Total Warfare Game -> Depot is one of the main buildings at your base. It protects the food, iron, oil, silver from the enemies. Enemies can not loot this reserved amount of resources even if they get successful in attack. The depot can protect a limited amount of resources. You can increase it by upgrading.

In Gunship Battle Total Warfare, you play as an admiral who has to take care of all the activities; managing the resources, attacking, defense, building, upgrading, researching, and more. As you level up admiral, you earn admiral points which you can use to unlock admiral abilities.

Admiral Level Up -> To level up an admiral, you need Admiral XP. You can obtain admiral XP by defeating the Armada, armada bases, completing the quests.

Spending Ability Points -> Leveling up grants ability points. Tap the avatar at the top-left corner -> admiral ability -> you can spend these points in three different sections; carrier strike group, the landing force, and base defense.

Admiral Equipment -> Admiral equipment provides a massive boost to the base, army. You can craft the equipment in the munitions plant facility(near the research lab). Tap it -> select the equipment; headgear, uniform, secondary weapon, boots, primary weapon, accessory. After it, tap the + button and choose the material. You can obtain equipment material from the equipment loot boxes(defeat Armada) -> craft equipment. It will cost you silver. Silver can be obtained by completing the daily missions, from events, trading, silver mine.

To build and upgrade jets in the game, you need blueprints. You can obtain the blueprint loot box by defeating Armada base, from the black market, supply, events.

At the top-right corner, tap the event button and head towards the event center where you can check the details of ongoing events. Participating in these events reward you a bunch of items on the basis of rank. You can rank up by earning more points. Tap on any event and under the “how to earn points” section, you can check the ways of earning points. For example; attacking Armada, Armada base, and more. Based on the rank, you will get rewards or items such as blueprints, gold, Neoploymer, crates, loot boxes, silver, resources, and more.

All the scout reports, battle reports, game rewards you get in the mail section of the game. You can even replay the auto-battles; how the air units, ships, AFVs attack the enemy base by tapping the replay button in the battle report. Additionally, you get the details of the enemy who has scouted.

Tap on any empty space on the map -> deploy. It will cost you an assault ticket. After it, you can attack the enemy base from the main base or aircraft carrier. You can obtain assault tickets by completing the chapter quest(tap the Olivia icon at the bottom-left corner, above the missions to check chapter quests).

To call back, tap your base on the map -> retreat AC.

You can migrate or teleport on the world map using the base relocation ticket. You can obtain this ticket from the quests, loot boxes, event reward. Tap the empty area on the map where you want to move -> migrate -> confirm.

How To Send Reinforcement To Alliance Members?

These are the main tasks you have to do daily to increase power. Build – Build the ships, Jets, AFVs, and missiles. Upgrade -> Upgrade the buildings, Jets(using blueprint), equipment(cost you Neopolymer).  Craft – Craft the equipment and equip to the admiral. Research -> Keep researching in the research lab to activate buffs.

If you are low on resources, send the ships to gather the resources from the resource sites; Oil, Food, iron, and more. Strike -> Keep attacking Armada and Armada base for loot boxes. Repeat the battles to get more crates.

There is a trade post facility at the base; trade warehouse. Tap it -> trade info -> purchase the goods from a city at a low price and sell to another city at a higher price. You can earn a huge amount of silver by trading.

Always pay attention to the events as rare items can be obtained from the events. All you need to do is earn points by doing simple tasks; attacking, researching, increasing combat power. At the end of the event, you will get the reward.

Call For The Supply

From the free supplies, you can get speed-ups. Tap the supply button -> call -> after a few minutes, you will get the supply at your base(indicated with red smoke).

You can earn gold from the events, by completing the challenges. It is the premium in-game currency in Gunship Battle Total Warfare. We would recommend you to use it in obtaining VIP points to increase your VIP level. On the other hand, spending gold on instant construction is not good as it gives you a one-time benefit only, whereas you enjoy the VIP buffs all the time.

Completing the quests, daily missions, and challenges are the best ways to get free items in the Gunship Battle Total Warfare game. You can earn loot boxes, premium rare items, admiral XP, boosters, silver, and much more. Additionally, from the daily missions, you also earn daily score points. After gaining enough, the game rewards you with special items; keys.

So these are the top Gunship Battle Total Warfare tips & a strategy guide for beginners. If you have any questions or want to share more tips, then comment below.