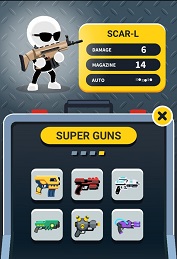 SayGames, the publisher of well-known games such as Drive and Park, Battle Disc, has just expanded its app portfolio with another new cool game called Johnny Trigger. In the game, you will be playing as Johnny(character) and shoot down the waves of enemies with the gun – timings, guns, etc. matters. There are lots of guns; Pistor, Submachine, Automatic Guns and Super Guns are available. Also, you can customize your character with cool outfits. If you have just started playing this game, then you are on the right page. In this Johnny trigger game guide, we have covered all the basics of the game. Also, we have shared a bunch of Johnny Trigger cheats, tips & tricks that you may like. So without further ado, let’s dive in.

In Johnny Trigger game, the player progress by completing the levels. On each level, you will find enemies on a different spot and the goal would be killing them at first sight before they shot you down. At each level, you will face waves of enemies and as you progress through the levels, you will eventually fight the boss. Boss fights are difficult because they don’t die in one shot. Also, as you progress through the levels, you will encounter the gun shops or treasure shops. From the gun shops, you can buy guns with cash. And, from the treasure shop, you will get one free treasure chest – these chests contain cash/money or gun. You can open the remaining two chests by watching the video Ads. Also, as you complete the levels, you will get the outfits. Let’s take a look at our Johnny Trigger Guns Collection and Outfits Collection: –

List of Guns That We Have Collected So Far: –

List Of Outfits That We Have Obtained So Far: –

So that’s our inventory as of now in Johnny Trigger game. Do you have guns or outfits that are not listed here? Please share them in the comment section below.

In some of the levels, you will find oil barrels or cans that can cause AoE DMG. Shoot these barrels to inflict an explosion attack that helps you deal with two or more enemies at a time.

In some of the levels, you will find hostages. Don’t kill them – if he is close to the enemy, you can use a single-shot gun, for example – pistol. Also, don’t shoot barrels or oil cans – if any there.

Save Cash For Superguns

From the normal levels or boss levels or treasure chests, you can obtain cash or money. Save it for a good rare purchase; superguns are rare and expensive. Also, powerful.

Go to the Guns section in Johnny Trigger game -> there you can select the guns that you want to use in the level. Tapping the gun displays details; DMG(x2/x4 means burst damage or AoE) and Magazine.

Watch The Video Ads For Freebies

That’s obvious. If you miss the enemy, he will shoot you. So be active all the time and tap the screen at the right time when the enemy is in the gun range. You can use SMGs or Superguns for burst/AoE DMG.

So this would be all in this post on Johnny Trigger tips & tricks. (Guns list updated – thanks to Henry and Joseph). White Fury gun has the best damage among all the guns.

This post was last updated on January 29, 2020. Update – Added all the superguns, automatic guns. Missing? Comment below.