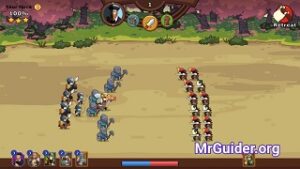 GET STARTED – THINGS TO KNOW IN KNIGHTS AND GLORY GAME

The core of the game is deck building and deploying the troops wisely on the basis of the enemy’s army. You will start the game from campaign mode and complete the chapters. As of now, the game features five chapters(head to the campaign mode screen -> tap the chapter to select). From this mode, you earn coins, character cards. In the training camp, you complete the stages and earn diamonds(premium in-game currency).

And in the conquest mode, you will fight against other players’ army for the rank and the chests. To open these chests, you need keys. The game generates keys automatically as the time passes. From these chests, you can obtain cards, gold coins.

Enemies can also raid your caravan post and steal the trophies(defeat will reduce your rank). So you must set up the defense. Let’s learn step-by-step –

In the battle, you can deploy a certain number of troops. You can check it at the top-left corner of the battle/defense preparation screen. To increase these numbers or send more troops in the battle, defense, you will have to increase the player level. How to level up? You need player EXP. And these EXP/Experience Points can be obtained by upgrading the cards, donating the cards to clanmates, and from the campaign mode.

Head to the card menu -> tap the card -> there you can check the troop size. Depending on the troop’s size, it will count.

Archer type units in the game attack from a range. Their ranged attack is much powerful. Symbol – Bow.

General type units lead the army from the front. With High HP stats and melee damage, these units work as a defender for back-end units. Symbol – Helmet.

Advisor – Advisor type units use their skills and attack the enemy’s group over time.

The battle system in Knights and Glory is quite unique. Before the battle starts, the player can check the enemy’s army; troop level, number of troops, and more. After it, you have to deploy the units; tap the + button. And at last, hit the fight button.

At the top of the battle screen, you can check the turns. For example; it’s sword/infantry. Then infantry units will attack from both the sides. If the enemy has not included that type of unit, but you have included it, then your troops will attack.

At the top-left of the battle screen, you can check the status; remaining troops. Win with a handsome number of troops(remain at the end of the battle) to get 3-stars.

Mainly, there are three; gold, diamonds, and keys. You earn gold from the chest, campaign battle. Earn diamonds from the training camp mode. And to play the conquest mode, you need keys. You can wait until it generates automatically or watch the video ad to obtain. The player can spend diamonds in the special deals menu/shop to obtain premium chests; fire chest, lucky chest, and ultimate chest.

In addition to it, you should also pay attention to the positions. For example; Infantry units lead from the front and then, in the back-end, cavalry/archers. And don’t forget to include the best units in the deck. Head to the cards menu and compare their stats.

Upgrading the card increases the unit’s stats; health, attack. And you also earn EXP, required to increase the player level. As the player level increases, you will be able to deploy more units. You get duplicate cards from the chest, campaign missions.

You get a free chest every certain amount of time at caravan post. It can store up to two chests at a time. So make sure to collect them asap.

In the shop menu, you can purchase some cards in exchange for coins. New goods or deals available in the shop every day. So make sure to visit the shop menu often to grab the cheap deals. And don’t forget to claim the free chest.

5.) Join A Clan And Get Benefits

On the main screen, tap the clan headquarter and join an active clan. Once joined, tap the chat icon just above the cards option. This will open the chat menu -> head to the second tab; request. There you can request for cards. Donate cards to other members for EXP.

So that’s all for now as Knights and Glory tips, cheats & strategies. Also, see – Top new Android games to play this week