In Looney Tunes World Of Mayhem game, there is only one way to grade up the toons and that is rank up. But if you don’t know how it works and how you can rank up easily, then don’t worry! In this post, we have explained everything you need to know about Looney Tunes World Of Mayhem Rank Up feature. And we have also shared some tips to rank up the toons fast in the game. Let’s get started!

Looney Tunes World Of Mayhem Rank Up – Toon Rank Up!

First of all, let’s know about the benefit a toon gets when its rank increased. When you rank up a toon, its all stats get increased: –

How To Rank Up? 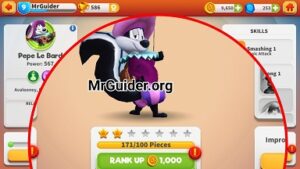 A toon becomes eligible to rank up when you have enough duplicate pieces. For example; If you want to increase the grade or rank of Pepe Le Bard toon, then you need to find its pieces(Pepe Le Bard pieces). Just head to the toon collection list -> tap on a toon character you want to rank up and hit the find button. On the next screen, the game will show you the source from where you can obtain the pieces of that toon character. Keep in mind that some characters are very rare and collecting their duplicate pieces is not an easy task.

Only building the house is not enough. Upgrade it. Tap on the house -> view upgrades. When you upgrade the house, the toon gets more tasks and it also increases the amount of reward.

After building the house of a toon in Looney Tunes World Of Mayhem, the toon will start receiving the task. Tap the yellow (i) icon to check out the task and the reward. Choose that task from which you can get duplicate pieces of that toon.

It’s the easiest way to obtain duplicate pieces of a character. There are many more ways too! Just check out our previous post to know all the free ways: –