Basics – How To Play Missile Dude RPG – Get Started

Before we head to the cheats, tips & strategy guide part, let’s learn the basics first. If you have not played any Idle game yet, then it could be difficult to understand how its mechanics work. Basically, you tap on the screen to fire missiles. At the beginning of the game, you progress through stages; after clearing a set of stages, you fight against a boss. When you strike down the enemies in Missile Dude RPG, the game gifts you minerals as the reward. You spend minerals to upgrade the launcher, hire marine, and in upgrading more stuff.

And after clearing a certain number of stages, a new mode(dungeon) gets unlocked. In this mode, you battle against powerful enemies and upon getting the victory, the game gifts you hellstone as the reward. Hellstone is another in-game currency/item, which is used to promote Marine, to upgrade missile.

Another event is when you unlock a new feature called dropport. Dropport is the feature that lets you earn rare gas. But the disadvantage is you will return to the Hellgate(start the game from the beginning). We have explained this feature in detail below. And once you reach the stage 300 in Missile Dude RPG, the game challenges you to defeat Diablo Hunter at 1000th stage. And as a reward, the player will get the diablo relic or diablo artifact.

In this part, we will learn about artifacts, dropport feature, marines, skill, launcher, and much more. Let’s gets started!

The launcher is the main weapon of the Marine. When you tap on the screen, launcher fires the missiles. And its damage power is based on the upgrade. At the top-left corner of the main screen, head to the launcher menu. From there you can check the damage power of launcher. If you want to increase, then upgrade the launcher using minerals.

In Missile Dude RPG, missile’s stats matter a lot. All the missiles have different stats and effects. For example; by default, the launcher features a small missile. And that one has no effect when equipped. As you progress, you get the missiles as a reward. To equip, go to the missile menu and tap on it. Hit the equip button and replace with the equipped one.

You can also purchase powerful missiles in exchange for uranium. Go to the store -> crate.

Effects of the missile; Basically, these missile impacts the damage power, and provide passive buffs to the Marines; increase in unit damage, armor damage, and more. Tap on a missile to check its effect. To upgrade the missile, you need an in-game item called Hellstone.

Marines are your best friends in Missile Dude RPG who help you in defeating the demons. You can hire Marines using minerals. Head to the Marine menu -> there you can check the stats of a Marine. To increase the power of Marine, upgrade them using minerals.

When you leave the game, they battle against enemies in the background. When you come back to the game, you can claim offline earnings(minerals).

In Missile Dude RPG game, you can unlock the launcher’s skills using minerals. Head to the launcher menu and under the skill section, you can check the complete list of unlocked skills. Once activated, go back to the battle screen and at the bottom of the screen, tap the skill icon to cast.

These skills are used to deal massive damage to the demons, to heal the characters, and there are many more uses(i.e. more minerals).

In the launcher menu, just below the upgrade point, there is an option; dropport. Using this feature, you can acquire rare gas. Tap the check amount button to check out the gas’s quantity. And hit the warp or super warp button to continue.

Warp: – It’s free. But you will lose the stage progress, launcher level, skills, unit level, and all. You will start from scratch. In return, you get rare gas.

Super Wrap – It’s not free. You have to spend uranium to use this feature. It would not reset the progress and lets you acquire rare gas without starting from the scratch.

Rare Gas is one of the precious resources in Missile Dude RPG. It is used to craft basic artifact. Use the dropport feature to acquire rare gas. If you have, then go to the artifact menu and hit the button; create the artifact. After it, you will see it under the basic artifact tab. Basically, it increases the stats of all the units and activates permanent bonuses. Without using this feature, you can not progress in Missile Dude RPG.

There are two types of artifacts; basic and Diablo, the Basic artifact can be created using the gas(read the guide above). And for the diablo artifact, the player has to reach the 1000th stage and defeat the diablo. The Diablo artifacts provide more bonuses as compared to the basic artifact.

Once you reach the 300th stage, tap the map type icon next to launcher option(at the top-right corner). On the next screen, you will see the goal details. Basically, you have to reach the 1000th stage. Try to reach ASAP to get free rewards.

Uranium is one of the main in-game items in Missile Dude RPG. You can use it to activate the mind acceleration(tap the brain icon, bottom-right corner), super warp(dropport), and there are many more ways. How to get uranium in Missile Dude RPG? Answer – Complete the achievements, quests, from the fairy, and from the store.

Hellstone is another rare in-game item. It is used to promote the hired Marines, in upgrading the missiles. How to get Hellstone? Play dungeon mode, complete the quest, from the fairy, and from the store.

Dungeon mode is the most difficult mode in Missile Dude RPG in which you fight against powerful demons. From this mode, you can obtain the Hellstone, crates, and much more.

Sometimes, when you defeat the boss, the game gifts you portal set items. These items activate the bonus buff and impact the whole game’s progress. At the top-right corner, tap the menu button-> go to the museum -> there you can see the portal set effect. 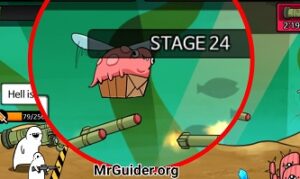 When fighting against the demons, keep an eye on the fairy. A fairy appears on the screen after every few minutes. Tap it to get the reward. Sometimes, you can double the amount of reward by watching a video ad.

In Missile Dude RPG, you have to tap on the screen to fire missiles. However, the Marine attacks automatically. But their attack speed is very slow. And your fingers also need rest. You can activate the laser lock boost to fire the missiles automatically. On the main screen, at the top right corner, tap the launcher icon. Use the lock booster to activate it. Or watch the video ad. After activating a certain number of times, the laser lock’s level will go up. You can obtain boosters from the store.

#4.) Don’t Spend On Skills In The Beginning

Well, launcher’s skill helps a lot in the battle when fighting against a powerful enemy. But their upgrade cost is very high. We would recommend you to not to spend minerals on these upgrades and instead,  invest in Marine’s growth.

#5.) Return To The Hellgate

Use the dropport feature to acquire gas. Then use the gas to create artifacts. Artifacts unlock permanent bonuses for the player. So we would recommend you to use this feature often at a right stage. For example; for the first time, you get 120 gas. Later, use it when the amount of gas is double. Otherwise, you would not get any benefit. To increase the amount, upgrade the army, clear more stages.

As mentioned above, all the Marines featured in Missile Dude RPG have different stats. Don’t upgrade a Marine too much. Unlock new Marines as soon as possible because new Marines are always better than the old ones. In the beginning, we would recommend you to not to upgrade a marine after reaching the 50th level. Once reached, unlock the new one and upgrade it to level 50. And so on. Next time(after activating the artifacts), set the target to 100. And then 200, and so on.

So these are some basic Missile Dude RPG cheats, tips & tricks for the beginners. Also, see – Best Idle games like this one