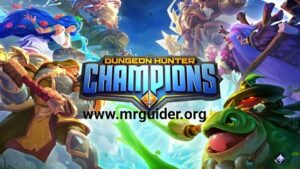 Gameloft’s new ARPG “Dungeon Hunter Champions” has just landed on Google Play Store and App Store for all. The game features over 250 champions, each with unique skills and traits, multiplayer game modes, adventure mode, and much more. In this post, we have covered everything about the game you need to know: – Dungeon Hunter Champions cheats, tips, and the strategy guide to build a strong team of best champions quickly and get 3, 4, 5 stars champions.

As usual, it starts with a tutorial in which you learn about the basic of the game; how to play, about champions, combat controls, skills, summoning, upgrade, equipment, and much more. After the tutorial, you can manually handle all kinds of things as you want.

The Basic: – Your primary objective is to build the best team of champions(3 stars-5 stars). Initial levels in Dungeon Hunter Champions game are very easy to clear, but as you progress, it becomes more challenging and difficult. To build the best champions team, the player can level-up a champion, upgrade the gears, unlock the new skills, traits, and promote the champion to significantly increase the attributes of a champion. Let’s start the Dungeon Hunter Champions guide first and learn how to start like a pro!

1.) Dungeon Hunter Champions Walkthrough To Start Like a Pro!

As stated above, your objective is to build the best team of champions. To slay down the powerful boss in boss raids, to defeat opponents in multiplayer modes, you need to build the team of best champions(3 stars-5 stars). 1-star and 2-star champion considered as the consumable material to level-up the high-star champions. Here’s how you can start like a pro in Dungeon Hunter Champions game: –

In this part of Dungeon Hunter Champions cheats, tips, and strategy guide, we will learn about the champions, how to increase their power, how to build a strong team, summoning, skills, and much more,

Dungeon Hunter Champions game features hundreds of champions in the game. You can collect these champions using summoning feature or as a reward. The stats, elements, traits of all the champions are different. Elements of champions: –

Dungeon Hunter Champions Tips -> You can take advantage of elements in the battle to deal bonus damage. Here’s how: –

How to increase the power of the champions?

To increase the power of champions or to improve their stats such as HP, Defense, Attack, Accuracy;

Once a champion reaches the maximum level, you can promote it. Promoting adds one more star to that champion and increase the stats significantly.[For example; you have a 4-star champion, promote it to make it a 5-star champion).

To unlock the new skills of a champion in Dungeon Hunter Champions game, you need to ascend that champion. Ascension also unlocks new synergy trait. How to ascend a champion? You need: –

How to obtain ascension elixirs? Defeat the demon kings in boss raids mode.

There are two types of skills; active and passive. The passive skill of a champion benefits the whole party. For instance, if you add Spearman to your party, then his Synergy Trait(Passive Skill) will increase the attack of ally champions by 25%.

You can unlock new skills of a champion by ascension. Read the ascension guide above.

How to level up the skill? Train the champion using a tutor fuzzlepuffs(get it using battle points, read the guide above). If you have the same type of champion in your collection, then use the duplicate champion in training to level-up skill.

You can obtain gears for your champions by playing the adventure mode or purchase the gears from the black market in the shop section. Upgrade the gears to improve the stats and improve the battle performance. 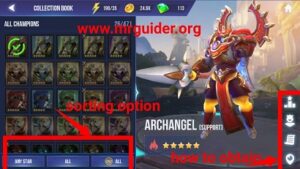 You can check all the characters and their stats in the collection book. You can even check how to obtain a specific character. Here’s how: –

Go to champions tab -> at the bottom-right side, tap on the collection option. Use the sorting options to sort by stars(1, 2, 3, 4, 5), elements(fire, water, nature, dark, and light). Tap on the location icon to check how to obtain that character. Tap on the info icon to check character’s stats, skills, and other attributes.

All the 4-stars and 5-stars champions are best because they have better stats.

You can summon 1-star, 2-star, 3-star, 4-star, 5-star champions using soul discs or shards. Soul discs can be obtained by completing the missions, daily quests, as an achievement reward, or from a crate. Types of summoning: –

Among all these discs, the legendary disc is extremely rare. You can also use gems to summon champions[tap on the featured deal in the soul discs tab].

You can obtain shards by completing the missions, daily quests, and as a reward. Use these shards to summon a champion -> go to summon -> head to shards tab -> choose a summoning type and confirm.

Join the guild to earn guild points. You can use the guild points to get the common disc, rare, disc, and light & dark shards. Go to shop tab -> guild -> choose a deal – confirm. Check-in daily to get precious rewards daily.

In the 5v5 mode, you choose one of your best champions for the battle. You play as a team member. The objective is to destroy the enemy cores. At the top-left side, there is a map[track the enemies], go further and defeat enemies and destroy the enemy cores. Play this mode to improve your ranking and get precious rewards such as diamonds, gold, ranking points, XP, battle emblems and much more. 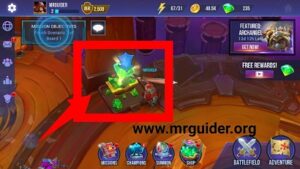 Gems and gold are the valuable in-game items, used in summoning, upgrading, and to shop other in-game items. In Dungeon Hunter Champions, you can get gems or gold free by opening the gem chest and gold chest. On the main screen(tavern), walk around the tavern and you can find the chests; tap on a chest to claim the reward.

Go to the shop -> free -> watch the video ad and open the mystery crate. You could get a 5-star champion, a huge amount of coins or gems. Watch the video ad to get gems, potions PvP energy, normal energy.

3.) Join the guild and check-in daily

4.) Take advantage of elements, use the passive skill 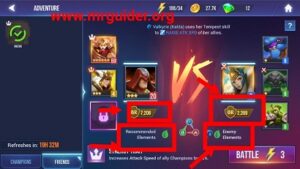 Before you start the battle, take a look at the enemy element and choose those champions who can deal bonus damage. Read the champions guide for more info. Additionally, choose the champion with passive skill(read the skill guide above to know what is it) to get more advantage. If you have a healer(supporter champion; Boon Sister), then must include it in your party because she can heal or restore the HP of allies. Make sure your party’s BR(Battle rating) is more than enemy party.

5.) Look for buffs, use potions

On the battlefield, look for objects such as chests, crates, pots, and more. Destroy them using your basic attack, you could get buffs, coins, or much more. If your HP is low, then use the potion. You can get potions by watching the video ad(go to shop -> free).

Other players can attack you(tavern) any time and even when you are not playing the game. So, it would be better to set-up the best defense. Go to the battlefield – arena -> defense -> choose your champions for the defense and confirm. 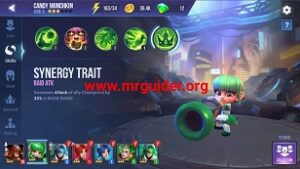 To compete with powerful enemies, improve the stats of all the champions(except low-stars); train them, equip them all the gears, promote them, and improve the skills.

9.) Repeat the adventure mode for more rewards and double it

Repeat the levels again and again, you could get high-quality rewards; champions, gems, gears, and much more. After the victory, double the amount of reward by watching a video ad.

You can play with multiple IDs if you have multiple Google Accounts or Facebook accounts. To switch, go to settings -> log-out -> link the game -> use another account.

If you need more help, go to mission section of the game, at the bottom of the screen, there are some sub-sections. Go to guide tab and read Dungeon Hunter Champions guide, tips, and tricks.

So, these are some Dungeon Hunter Champions cheats, tips, and a strategy guide for the beginners. Download – Here(Google Play Store). Also, see – Top new Android games 2018