IGG has just released a brand new MMORTS, named as Mobile Royale, the game lets you build your own base where you will train the troops, summon & develop the heroes, build the buildings, and develop it to raise the might. Mobile Royale also features a guild system that lets you participate in the kingdom battles. Most of its features are same as other MMORTS games; all you have to do is build, upgrade, train, gather, and attack. If you are having the trouble understanding its mechanics or looking for tips & tricks, then this Mobile Royale guide and Mobile Royale tips, cheats & strategies will help you. Also, see – Mobile Royale Gift Code 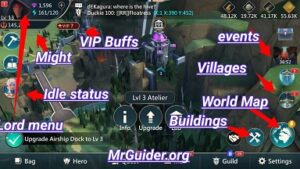 The concept is pretty simple; You need resources to develop the base or raise the might. There are four types of resources in Mobile Royale; food, wood, stone, and gold. All these resources used in building, upgrading, training, researching. After playing for a while, you will be out of these resources.

To get the resources; you can build production buildings at the base, gather from the world map, and attack other players’ base. Let’s learn about gathering and looting.

Gathering – If you head to the world map, you will the food/wood/gold/stone RSS points. You can send the troops to harvest or gather these resources. Here comes the part of troop load. A small number of troops can load only a small amount of resources from these RSS points. So if you want to gather more, you will have to increase the troop load. To increase the troop load, you will need to train more troops in the barracks. Here comes the brigade part. You can not send an unlimited number of troops to a harvest point or enemy’s base. There’s a limit which is impacted by the hero’s level. Developing the heroes let you send more troops on attacks, harvest points.

Looting – Looting is not easy. Especially, In the early stage of the game, it would not help you. The reason is most of the base’ resources are protected with vault’s protection. You can loot the resources beyond this limit. But it would be a small amount only. To loot an enemy, head to the world map -> tap its base -> attack. Keep in mind that you should not attack powerful enemies.

What if an enemy attacked you? It may impact the might/power, troops, wall, and some buildings.

How do you protect the base from enemies? Raise the might, research techs in Sage building, training troops, activating the talents, equipping the gears, and by powering up the heroes.

Heroes or the main characters in Mobile Royale game lead the army in campaign battles, harvesting, defense, attack, and wars. Their strength impacts the whole army, base, and result. Mobile Royale game features over 15 mighty heroes and all the heroes have unique skills.

How To Get Heroes?

You need soulstones to unlock or summon a hero. You can obtain these soulstones by completing the mentioned stage; it shows up when you tap any locked hero in the heroes menu.

How To Level Up Heroes?

There are two ways to level up a hero in the Mobile Royale game; using the EXP potions and by defeating the monsters on the world map, in campaign battles.

EXP potions -> EXP potions can be obtained by completing the quests, defeating the monsters, random reward. To use these EXP potions, go to the hero’s profile screen -> tap the + icon next to the level, on the left side of the screen. Tap the use button and select the quantity.

Defeating the monsters – If you don’t have potions, then attack/defeat the monsters in the fight. Go to the world map -> there you can find monsters. Victory will reward EXP points to the heroes.

How To Promote Heroes?

Promoting the hero is the same as recruiting the hero. You need soulstones to promote a hero. For example; To promote Saoirse, you need Saorise Soulstone. Head to the hero profile menu again -> tap the + icon next to the promoting gauge -> there you can check the stages to obtain soulstones. If you have, then it will show you an arrow/upgrade icon instead of a + icon.

You can obtain the runes from the rune chests or by defeating the monsters. You can use these runes to improve specific stats of the hero, for example; critical damage, defense, attack, and more. Go to the hero profile menu -> on the right side, tap the third icon; rune -> there you can see the list of runes you have and equip to one of the rune slots. To unlock rune slots, promote the heroes.

When you tap the rune item, you get one more option; fuse. Tap it -> that screen has two tabs; fuse and divide.

Fuse – You can merge multiple runes to get a high-rank rune. Divide – You can degrade a rune(opposite of fusion). Also, see – Mobile Royale Gift Code

There are lots of buildings in Mobile Royale. Each contributes to the growth in a different way. Let’s take a look at the main buildings: –

This game is similar to other MMORTS games. And, the mechanics are pretty simple. You have to focus on castle upgrade and you will get your challenge. On the left side of the screen, tap Cleric -> there you can check the status; if there is an idle status, work on it.

In Mobile Royale game, you play as a lord. To increase the lord level, you need player EXP. You can earn player EXP by defeating the monsters in the campaign, completing the city goals, monster hunts, clan villages, and army battles. If you have player EXP item, tap the avatar at the top-left of the screen -> tap the + icon -> use.

Equipment for the lord – You can forge equipment in the smithy building. Hunt the monsters, gather the resources to get material for forging.

Talents – When you level up(lord), you earn talent points. One can use these points in activating boosters; military and economy.

Diplomacy or clan diplomacy – When you tap the castle, you get an option; diplomacy. Tap it. On that screen, you have three options; switch tech, total, and clan gift.

Switch Tech – Here you can check all the eight clans featured in mobile royale game. The first one is Kingsdor. You can unlock more diplomacy/clans by playing the campaign mode. Each clan provides unique techs. Tap on diplomacy(e.g. Kingsdor) -> on that screen, you can check all the techs. For example; food tech increases food production. Switch to another one if you want. You can unlock new techs by raising friendship with the clan.

Total – Here you can check all the buffs/bonuses from clans, diplomacy.

How To Raise Friendship With The Clan/Diplomacy?

Go to the diplomacy notice board(if you look around on the base’s screen, you will find a scroll icon, tap it). On the left side of the screen, you can check the requests. Complete/submit these requests to get a reward; friendship points(to raise friendship). Additionally, you also get player EXP, might points. Tap the submit button to send the requested trade products. In case, you have no product; you can obtain the item by trading. Tap the > icon just below the item -> trade.

So this is the Mobile Royale guide for the beginners. If you have any question, then ask in the comment section below. Let’s take a look at our top Mobile Royale tips, cheats & strategies.

Purple crystal is the premium in-game item in this game. You can use it to buy resources, speed-ups, and in many more tasks. But if you are an f2p player, you should spend it wisely. There are two ways to spend it wisely; invest these crystals in Atelier lab and get more crystals the next day. Or invest in VIP buffs. At the top-left corner, tap the VIP level button -> spend crystal and get the VIP points. Raise VIP level to get premium buffs.

2.) Pay Attention To The Clan Diplomacy

You will need some items, required in building, forging, upgrading, heroes development. Most of these items can be obtained by hunting the monsters on the world map and gathering the resources. Additionally, to level up heroes, you should keep attacking the monsters. And, if you are low on resources, send the army to harvest resources.

5.) Check Out The Merchant Deals

Head to the airship dock -> merchant -> here you can buy speed-ups, training boost, boosters, in exchange for resources.

Note – You should join an active guild. Don’t join a dead guild.

7.) Equip Gears To The Lord

You can forge the gears in smithy facility. To equip the gears, go to the lord menu -> tap the empty slot -> equip. These equipment provide boosts to the city.

So these are the top Mobile Royale tips from our end. You can share your tips in the comment section below.