Destiny Child is a brand new RPG for mobile in which you build the team of childs(characters) to strike down monsters. Check out Destiny Child guide, tips, cheats & strategy

Destiny Child global version is now out for Android and iOS. The game challenges you to assemble a team of best characters to defeat powerful enemies in all the game modes; underground, event dungeon, PvP, story, and more. Additionally, to increase the power of characters, you will combine the material characters to level up main characters, use the evolution material to evolve, level up their skills using Onyx, awaken using Onyx, equip weapon/armor/accessory. Since there are loads of things to understand, a guide would be useful. We have put all the information in today’s Destiny Child guide and Destiny Child tips, cheats & strategy.

THINGS TO KNOW IN DESTINY CHILD

The underground mode is the most challenging game mode in Destiny Child. There are 15 stations in the underground and the objective is to conquer them all. At each station, you battle against the waves of enemies. The difficulty level increases as you progress to the deep stations. After clearing three stations, you will get the reward; gold, weapon, armor crates. You can pick five characters out of all for the battle. The Hp stats of characters and the fever gauge % will be carried over to next battle stations. For example; In a battle station, one of the Childs’ HP reduced to 50%. Then, In the next battle, that character will start the fight with 50% HP.

Since initial battle-stations are easy, you can battle with 3*-4* characters(to save the health of main characters). So don’t use the 3*, 4* characters as the ingredient to develop main Childs.

THE BATTLE AND SKILLS 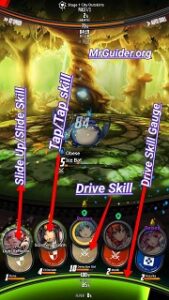 The battle mechanics are pretty simple; all the characters have auto-attack skill. They attack the enemies automatically. In addition to the auto-attack skill, there are three more skills -> tap skill(to use this skills, you tap the character icon when the gauge is full), slide skill(to use slide skill, hold down the Child’s icon and slide up), and drive skill(you can check the drive skill gauge just above the HP bar. When it’s full, you will see a drive skill icon just below the Child’s icon. Tap it to cast. Keep in mind that only one character can unleash drive skill at a time).

After tapping the drive skill button, on the next screen, you will have to stop the pointer at the right time. Depending on the timing or perfection, you will earn the fever points. At 100%, the fever mode will get activated. Once activated, rapidly tap the characters’ icons to deal damage to the enemies.

So that’s the basics of Destiny Child. Let’s learn step-by-step –

How To Increase The Power Of Childs In Destiny Child?

Event Dungeon -> Participate in the level up events. Apart from level up material, you also earn EXP. You can participate in these events a certain number of times. All the characters featured in Destiny Child belongs to one of the following titles; wood, light, fire, water, dark. Depending on their element, you need level up material. Here’s the schedule: –

The skills of the characters play an important role in battles. Without leveling up skills, you can not defeat the powerful bosses. Go to the Child menu -> tap a character -> skills -> level up. You need a set amount of Onyx to level up skills. Complete the daily missions, Davi’s challenges, Lisa’s tasks to obtain Onyx. Additionally, you can also earn Onyx by extracting useless Childs.

Head to the Child menu -> tap the character -> more -> uncap -> select the same unit -> confirm. If you want to unbind, tap the unbind button. It will cost you Onyx.

To develop further, you can grade up the childs using the awaken feature. For example; E to D, then C, B, A, S. An S Rank character can equip accessory. Additionally, stats will improve.

Weapon, Armor, Accessory -> How To Obtain?

Weapon, Armor, Accessory can be obtained from the story mode missions, event dungeon, underground mode, by summoning. To equip, go to the character’s profile -> tap the + button at the bottom-left corner -> choose an item -> confirm. To unequip -> tap the same item -> unequip.

The equipped items also impact the stats of Childs. Upgrading the equipment will directly improve the stats of the character. To upgrade, tap the item -> enhance -> select the same item to use as an ingredient -> confirm. Go to the item tab -> view equipped -> follow the above process.

So these are the top ways to increase the strength of characters in Destiny Child.

Attackers -> This class character provide attack type buffs to the allies; increasing the attack power, ATK bonus/damage bonus. Additionally, they play a vital role in slaying down the enemies.

Healers -> Healers heal the allies, re-generates the health over time.

Debuffers -> They can decrease the DEF, ATK, Skill Gauge charge rate of enemies.

Since you have five slots, you will have to pick the best characters; a healer is must, defenders to increase DEF, attackers to deal damage.

So this is the Destiny Child guide for the beginners. Let’s take a look at our top Destiny Child tips, cheats & strategy to master the game.

You can assign one of the team members on the leader position. All the characters have leader skill. For Example; If you assign Dana as a leader, then she will provide +5% DEF to all light type allies. You can check the leader skill in their profile section. To set a Child as a leader, go to the team/child menu -> at the top-right, tap the leader select button -> choose a leader.

Event Dungeon is one of the best game modes to earn gold, enhancement material, evolution material. Since you have limited turns per day, make sure to participate in each event daily.

Don’t ignore 3-star characters. Develop them, because they can help you in initial battle stations in the underground mode. If you don’t want to spend level up material, then develop these characters by sending on expeditions in the exploration mode.

You can power up Childs/Characters by leveling up, increasing the skill level, uncapping, awakening, evolving, equipping/upgrading equipment.

So that’s all for now as Destiny Child guide and Destiny Child tips, cheats & strategies. If you know any other tip, share with other viewers in the comment section below. Also, see – Tier List & Rerolling guide

For More Updates, Game News, Game Guides, New Game Releases, And ALERTS – Like Us On Facebook – MrGuider, Follow Us On Twitter – @techhuntr. Check Out – Top New Android Games. Have You Any Suggestions? Submit Here