Robot Tactics is a brand new strategy game for Android and iOS by Proficient City Limited. Check out our Robot Tactics guide, tips, cheats & strategy to assemble the best robot

The creators of Bomb Me game, Proficient City Limited, has just released a robot game for mobile devices that lets you build your own mecha. In Robot Tactics game, the player assembles a team of Warlocks and the characters to defeat the enemies in a wide range of game modes; national war, PvP, quests, and more. You can even create your own mecha or robot by assembling the parts. Today, In this post, we have covered everything about the game you need to know as a newbie; Robot Tactics guide and Robot Tactics tips, cheats & strategy guide to master the game.

Before you head to the cheats, tips & strategy guide part, let’s learn the basics first. In Robot Tactics game, you have to build a team of warlocks and deploy the pilots to each warlock. The game provides three warlocks for free when you start the game for the first time. After it, to get the warlock or robot, you need to find the robot parts. We will go deep into the building mechanics in the guide below. Just keep in mind that, parts are important. If you have rare or powerful parts, then you will be able to build a strong mecha. These parts are classified into the ranks; A, S, C, B, and more. S-Rank, A-Rank, or B-Rank parts provide more buffs to the mecha in the battle.

And In Robot Tactics game, characters or pilots play an important role. You assign these characters to warlocks. The character system also follows the same mechanics(rank system). A high-rank pilot provides more buffs to the warlock. The problems you may face after completing the tutorial is how to find the parts, upgrade parts, produce parts, and more. Read the robot tactics guide part below to learn more.

At the beginning of the game, you have access to the quest mode only. The real game starts when you complete the chapter 2 and unlock the new game modes; national war, fortified point, and arena. These modes get unlocked when you reach the level 10 in the game.

In the quest mode, you complete the chapters and earn in-game items or currencies such as steel, crystal, ambers, bucks, upgrading material, and more. The quest mode has three sub-modes; chapters, the daily dungeon(weekly), and events. In the dungeon mode, you battle against robots and earn upgrading material(to upgrade parts, weapons of the robot/warlock). From the event mode, the player earns tickets(after collecting enough, you will be able to draw a rare item). In short, you can farm items in Robot Tactics game by playing the quest modes; chapters, event, and daily dungeon.

In this part, we will learn about the warlocks, parts, upgrading, characters/pilots, items, and much more. Pay attention to all the parts to master the Robot Tactics game! 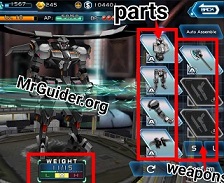 You can build three types of warlocks in Robot Tactics game; light, medium, and heavy. The weight of the robot determines the warlock type: –

To build a robot in Robot Tactics game, you need these parts: –

Torso – The main part of the robot body. The HP of a robot is highly affected by this part. Each part adds weight to the robot. For example – The weight of these parts are as follows: –

Now, the total weight of this robot is 15. So, it’s of M(Medium) type. In short, the parts of a robot are important. Let’s learn more.

On the main screen, tap the parts option. On the next screen, tap the preview option. There you can check all the parts you have. Tap on a part -> tap the select button(bottom-right corner). The game will show you the details of that part; Anti-Pierce, Anti-Blast, Faction, Landform, and stats. Among all these, the two main points are faction and landform.

Faction and Landform describe the affiliation of a robot. Faction types; PKU, USH. Landform; Land, Navy, and Air. You will learn more about these two things in the skill guide below.

If you have enough parts in your inventory, then head to the assemble menu -> tap the create button. In the first column, select the parts; torso, legs, arms, and the bag. In the second column, select the weapons(if you have). A weapon increases the attack, damage, and critical hit power of the warlock. The output or stats or a type(PKU, USH, Land or Air) of a warlock is based on the selected parts. So make sure to choose the parts wisely.

After creating the warlock, you can check its stats in the assemble menu. Here’s the detail of warlock stats: –

You can produce weapons in the parts menu. Just head to the parts menu screen -> produce -> select weapon blueprint or draft and hit the produce button. If you have not any blueprint, then complete the chapters in quest mode. There are a number of weapons you can produce: –

In the parts menu -> head to the preview screen. On the next screen, head to the weapon tab -> tap on a weapon to check its stats; attack power, damage type; cut, pierce, or blast, range, and much more. The warlock’s stats are highly affected by the weapon. Use high-quality(B-Rank, S-Rank) weapon to activate buffs.

Most of the time, you get blueprints from the chapters. These blueprints are used in producing robot parts and weapons. On the main screen, tap the parts option -> produce -> select the blueprint -> produce. It’s not free. You need crystals, steel, and amber (resources). You can gather these resources by completing the chapters.

To upgrade the warlock’s parts and weapons, you need upgrading material. Play the daily dungeon mode to obtain the materials. You can play the daily dungeon in three difficulty modes; normal, advanced, and difficult. We would recommend you to play the normal mode at the beginning of the game. After obtaining the material, go to the parts menu -> upgrade -> parts/weapons -> select a part of a weapon -> hit the upgrade button.

The characters are divided into the race: –

And there are five types of characters in the Robot Tactics game: –

On the main screen -> tap the characters menu -> preview -> tap on a character and hit the select button to get more details; race, skills, stats, rank- S, B, C, and more.

How To Get Characters?

Go to the gacha menu. There you can summon characters using the amber. Amber(resource) can be obtained by completing the missions. On the main screen, tap the achievement icon, just below the gift icon. There you can check daily missions, main missions, and more. Use the normal or 10 times summon to get pilots. There is one more option; recharge amber(ignore it if you don’t want to spend real money. Swipe to get more options).

So this is the Robot Tactics guide for the beginners. Now, let’s check out our Robot Tactics cheats, tips & tricks to build the best robot.

1.) Pay Attention To The Weapon Skills 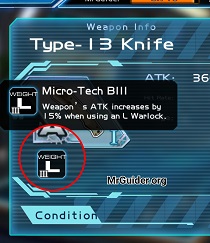 In Robot Tactics game, most of the weapons have unique skills. And these skills get activated when you use the weapon in a specific warlock. For example; Type-13 Knife is a weapon and deals +15% damage to the enemy when equipped to a Light(L) Warlock. To check the skills of a weapon, go to the parts menu -> preview -> weapons -> tap on the weapon -> just below the icon, you can check its skill(long press on the skill icon to get more details).

2.) Get Most Out Of The Parts By Assembling Wisely 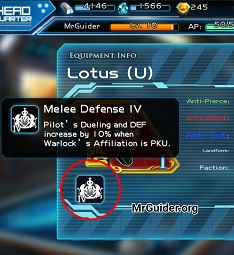 You should pay attention to the part’s skills too. For example; Lotus(U) is a torse part and when equipped to a warlock with affiliation(PKU), increases the defense by 10%. You can read the warlock guide above for more details. To check the skills of parts, head to the preview screen. Select a part and just below the part icon, long press the skill icon to get the skill details.

3.) Assign The Pilots On The Basis Of Skills 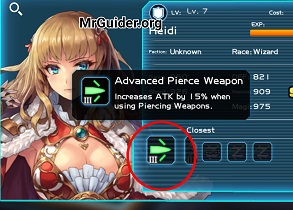 Pilots are the main characters in Robot Tactics game. They control the mecha in the battle. Like parts, weapons, pilots too have some special skills. You can check the skills of characters in the character preview menu. Long press the skill icon to get the skill details. You should assign the pilots on the basis of weapon you are using in a warlock. For example; Patience is a hero who deals +10% damage to the enemies when using snipers.

4.) Increase The Power Of Mecha

6.) Complete The Missions For Free Goodies

On the main screen, tap the achievement icon and head to the mission menu. From there you can check out all the available missions. Complete these missions to get free rewards; rare items amber, bucks, upgrading material, and much more. Complete the event missions to get S-Rank items for free.

in the Arena Mode, you fight against other player’s warlock team. Tap the menu button -> choose battle -> match opponent. Prior to it, tap the change button to customize the team. Defeat the players and earn points. You can exchange these coins in the shop for blueprints and parts.

So these are our top Robot Tactics tips, cheats & a complete strategy guide. Once your team has enough power, head to the national war mode and send the team on the mission to get more rewards. Also, see – Best action games for Android