Dreamplay Games, the creators of Real Moto game has just released a brand new game Underworld Shelter that challenges the player to survive in the nuclear war by building the shelter. All the zones are infected with radioactivity caused by nuclear war. It’s time to save humanity by constructing the shelter in the basement. You will build mines, workshops, purification, and many more facilities. And to build these facilities, you will need building material which you gather from the expedition. Underworld: The Shelter game also features PvP mode in which you invade other players’ base. If you are having the trouble understanding the game’s mechanics or looking for tips, then our Underworld: The Shelter guide and Underworld: The Shelter tips, cheats & strategy will help you.

THINGS TO KNOW IN UNDERWORLD: THE SHELTER

In Underworld: The Shelter game, the cube is the premium item as it is hard to get from the quest rewards. You can use this in-game item in the shop for mutant crates, upgrading the inventory. From these crates, you can obtain rare equipment, high rank(3*-5*) mutants. 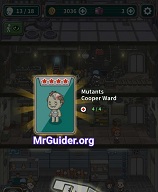 The game’s mechanics will force you to spend this in other tasks such as in reviving(in the battle), unequipping the weapons, instant treatment, and more. Avoid all these traps and use this item wisely.

Gold is another item in the game. You can use it in upgrading the rooms in the shelter, recovering the RP. You can also use it in leveling up the residents. But most of the time it will result in failure and you will lose thousands of gold coins. However, it also increases the success rate as you perform this action. On the other hand, you can manually level up a resident by killing the monsters on expedition stages, rescuing the mutants, opening the material crates in the expedition, by deploying them on a job.

This is one of your main jobs in Underworld: The Shelter game. You can deploy residents to defend the shelter, on production floors – to produce items, send them on the expedition to gather the material. And as you build more facilities in the shelter, you will need more people. To increase the population or to get residents, head to the expedition and rescue mutants. You will get high-rank mutants from hard levels. After rescuing the mutant, your resident will come back to the basement; tap it and let him enter the shelter.

After it, you will have to treat the mutant as he is infected with the virus. You treat the mutants in Infirmary; 2nd floor. Tap that facility -> select a mutant to cure. Once done, check the waiting list and let him in. In this way, you can get residents.

There is a limited space for the residents in the shelter. To shelter more residents, you must expand the living room; 1st floor. Tap the living quarters -> upgrade it. Upgrading this facility increases the shelter space and more slots; to recover the HP.

RECOVERING THE RP AND HP

After an expedition, resident’s stats; HP and RP gets reduced due to enemies’ attack or nuclear radiations. You must treat the injured resident. In the living quarters, you can restore the health of residents. Tap the floor/facility -> select the resident -> wait -> confirm. It only recovers the HP(Red). To recover the RP(Green bar), you can spend coins. On the main screen of the game, at the top-left corner, tap the resident bar -> select the injured resident -> tap the RP Recovery button -> confirm. 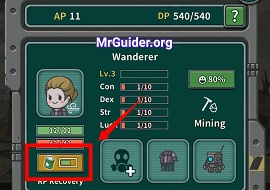 If you scroll down a bit, you will be able to see the locked building. Tap it and check the requirement. Basically, we have to complete the two requirements; resident, matching the required aptitude and items. For example; To build the purification center, you need a resident having water quality research ability. To build the mushroom farm, you need a resident having mushroom cultivation ability. 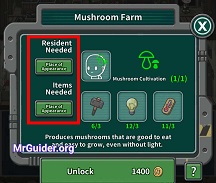 Tap on the locked floor -> tap the button; place of appearance -> there you can check the source. Go for an expedition on that area to find him. In addition to the resident, you also need items. Repeat the stages in expedition mode to obtain.

Tap on any floor -> tap the + button and deploy the residents to produce N coins or other materials. Upgrade the facilities to unlock more slots and deploy multiple residents. 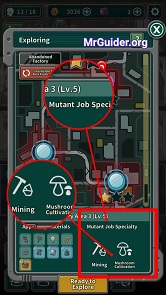 After defeating the boss of that area, you will unlock the challenge mode. Complete the challenge in minimum time to earn three-stars and claim challenge reward; cubes, mutant crates, coins, and much more.

HOW TO LEVEL UP RESIDENTS IN UNDERWORLD: THE SHELTER

You can level up a resident for free, without coins, by playing the game; in the expedition mode, select the resident you want to level up and kill the enemies, rescue the helpless mutants, and hunt the loot. All these activities will grant experience points to the resident and after gaining enough, the resident’s level will rise up.

WIth Coins -> Tap the resident -> level up -> confirm. Prior to it, you must check the success rate.

Battle mechanics are pretty simple in Underworld: The Shelter game. Depending on the contamination level, resident’s RP and HP will reduce over time. You will have to exit the area before HP reaches 0. If you fail, you lose all the items mutants.

In the battle, you use the joystick to navigate the resident and the bot. Usually, all the resident come with default bot(equipped). Bot attacks the enemies automatically when in-range. Defeat all the monsters to unlock new path and enter the new base. Loot the crates, rescue the mutants, go back or complete the area. That’s it.

Equipment In Underworld: The Shelter

In Underworld: The Shelter, you can increase the stats of a resident; AP/attack. DP/Defense by equipping the items; hat, suit, bot. You can craft high-quality items in the workshop or obtain from the mutant crates. To change or equip -> tap the resident bar at the top-left -> tap on the resident -> tap the slot(HAT/SUIT/BOT) -> select the equipment. To unequip, you will have to pay the cubes. If you change, the equipped item will be destroyed.

You can deploy residents for defense. Go to the top -> tap the above entrance/gate -> deploy the resident.

As mentioned above, all the residents have special abilities; mining, mushroom cultivation, and more. If you deploy the residents on the right job, their happiness level will increase and you will obtain additional rewards. For example; Deploy the residents having mining ability at mine. They will also gain experience(helps in leveling up). You can also boost the happiness bonus/boost by upgrading the facility.

You will need more resources in upgrading the facilities, crafting the equipment. Keep repeating the areas and loot as many resources as you can. Go with a high-level resident and defeat the boss. After defeating the boss of that area, complete the challenge for precious rewards.

You should equip the items wisely. Because, if you change the item, the game will destroy the currently equipped item. And if you don’t want to lose that item, you will have to unequip it; this will cost you cubes.

After rescuing the mutant, make sure to check its star level. If the star level is low; 1* or 2*, then banish them after transforming into residents for sacrifice points. In the early game, these low-star mutants will help you a lot. But after it, you would not need them.

You should not waste cubes in any useless task. Save them for mutant crates or inventory upgrade.

Every now and then, you will receive ad offers in the game; watch the video ad to claim the free crates. And in the battle, when exploring, from some crates, you might get the offer to recover HP by watching the video ad. Claim these free offers.

7.) Go With The Boosters

So that’s all for now as Underworld: The Shelter tips, cheats & strategies.