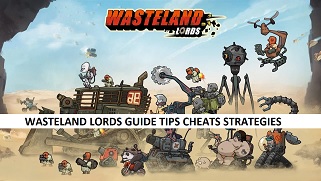 “Wasteland Lords” is a mobile game from popular developer X.D. Global, well-known for Ulala Idle Adventure game. In the game, you will be playing as a commander of the base/shelter that sets in the Wasteland. In this shelter, you build the rooms, deploy the characters, produce resources, make the character stronger by equipping gears/training, and there are plenty of ways to strengthen up. Wasteland Lords game features PvP and PvE battles. In this post, you will learn “how to play the Wasteland Lords game”, about the gameplay, shelter, upgrades, and other aspects such as tips on progression, cheats info, game modes, and much more. So, without further ado, let’s get straight to the main content: Wasteland Lords guide, tips, cheats, and strategies for beginners: –

Basics: How To Play Wastelands Lords⇓

In the Wasteland Lords game, you will be playing as a lord. At the start of the game, the game will give you an underground shelter where you can build your army. The main aspects of this game are PvP battles, farming, and building. We have explained PvP, PvE info below. In the shelter, you can build the room facilities such as barrack to train troops, resource production rooms to produce the resources, laboratory to research technologies, workshop to craft ordnance, and much more.

By “farming”, we don’t mean planting/harvesting crops. Here farming implies gathering the resources from the wasteland. See the “To Wasteland” button in the lower-left corner? Tap it. This will take you to the Wasteland map where you can check the other players’ shelter/base, resource tiles, infected enemies, etc.

On the wasteland map, tap the search button above the chat menu -> select what you want to do; defeat infected to get rewards or farm the resources such as cement, food, water, and gas.

Right after the game starts, we would strongly recommend focusing on getting stronger, farming the resources – avoid PVP AT ALL COST in the beginning. First, make yourself powerful. And then you can participate in the PvP, rally battles. Here’s the progression guide: –

The main facility there is power hub; upgrade it to increase max cap for other facilities, unlock new rooms/facilities.

Tap the lord avatar in the upper-left corner on the shelter screen -> this will take you to the lord menu that has a bunch of tabs on the right side; tap on the “strategy” option -> there you can spend the strategy points on three aspects; war, development, and assistance. War: improves battle performance. Development; gives shelter bonuses. Assistance; others. Tap on a strategy to check its detail. Upgrade the lord to get strategy points. You can use the strategy plan to reset the points.

Go to wasteland map -> look around -> you will find the shelters built by other players. You can attack them if their shield is not active. Tap on the shelter -> attack. Before you initiate the battle, use the scout feature to spy on enemy info; resources, defense, troops, etc. Only attack if you are more powerful than the target that you are going to invade.

Must Join A Clan

Tap on the clan button in the bottom-right menu -> apply for an active clan. Also, it would be better to teleport to the clan territory or near clan members. When clan members are nearby, you will be able to get reinforcement quickly or join the rally battles easily. Also, there are many benefits you get by joining a clan; rally battles, assistance, reinforcement, donate and earn alliance credits/prestige to spend in the shop for in-game items like speed-ups(accelerator, teleport machine, shelter shield, rename license to change the name, etc.)

In the Wasteland Lords, you will need the troops to battle enemies in PvP or PvE. Build the barrack buildings in the shelter and you will be able to train the troops; the higher the tier of the troop, the more stats it would have. You can unlock high tier troops in Wasteland Lords by upgrading the barrack building. Also, upgrading will increase the training amount, speed as well.

Heroes are the main characters in Wasteland Lords that you can assign on the buildings to boost their performance; like training speed, production rate, etc. Also, you can use the heroes in the battles. Tap the hero button in the lower-right menu list to check the list of heroes. Heroes in Wasteland Lords are unqiue and possess unqiue skills. Their role defines strength. Roles of heroes: –

You can get new heroes by collecting their shards.

On the top surface level of the shelter, you will find the waiting heroes; drag them to the rooms to get bonuses.

How To Get Batteries

The battery is one of the main items in the Wasteland Lords game. You can get batteries for free by completing the chapter quests, development quests, daily quests, and events.

Keep An Eye On The Events

In the top-right corner, tap on the event button to check ongoing events. Rare items, resources, and premium stuff can be obtained from the event. There are limited-time events that only last for a few days. Participate in the events and you can earn gift coupons which can be exchanged in the gift coupon exchange shop for hero shards, hero EXP, gear guide, resources, VIP points, etc.

So this would be all in this post on “Wasteland Lords guide, tips, cheats & strategies for beginners”. Got any new tips? Comment below.