1.) The Basics – How To Play WhamBam Warriors⇓

In WhamBam Warriors game, your main objective is to defeat all the monsters in the dungeon as soon as possible. You can choose up to 8 warriors for the battle. Keep in mind that you can not deploy all the warriors at a time. The cost of deploying a warrior is the battle gem. And when you start the game, you will get a few gems. So the player has to deploy warriors wisely. We will learn about battle gems in the guide part below.

Once you get the victory, the game will reward you stars and more items such as EXP Dol, weapons, warriors, and much more. Stars are required to unlock new features, regions, and warriors’ upgrading path(Awaken, transcend). Completing a stage would not be easy as you will have to solve the puzzles; the dungeon is like a labyrinth; you have to analyze all the routes, obstacles, and then deploy the warriors.

The game also features arena/Coliseum mode in which you battle against other players’ team and earn courage points. These points are required to fill up the courage gauge and when it gets full, you can draw a special reward. Getting victories in this mode also helps you in ranking up and when you get promoted to the higher league, you get a special reward. So this is the basic WhamWam Warriors game guide. Now, let’s head to the ultimate WhamBam Warriors guide and after it, check out our top WhamBam Warriors cheats, tips, and tricks.

In this part, we will learn about the warriors, how to increase their power, how battle works, battle gems, how to solve puzzles, Coliseum, weapons, and much more. Make sure to read everything.

These are the main characters in the game. In WhamBam Warriors game, these units classified into three types; fighters, lancers, and bruisers. Your primary objective is to build the best team of 8 warriors as you can select up to eight warriors for the battle. We would recommend you to focus on 2-3* warriors as 1* warriors are useless. We can use low-quality warriors(1*) to level up or upgrade high-quality warriors.

How to build the team?

On the main screen of the game, at the bottom-left side, tap the warrior’s option. After it, on the next screen, you will see the list of all units(warriors, weapons, EXP) you have. And just below the inventory, there would be eight slots where you can put the warriors. Just drag the warrior’s cards to these slots and that’s it. Keep in mind that the first slot is of leader and you can not exceed the deck cost(the total number of warriors’ battle gems). Collect stars to increase the deck cost. 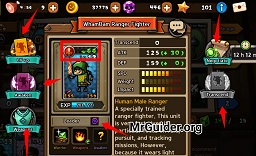 How to increase the power of warriors?

As you progress to hard missions or stages, you will face powerful enemies and it would be hard to hunt the treasure. But if you are increasing their power gradually, then it will be easy. There are a number of ways to increase the power of warriors: –

How to increase the level cap?

Your warriors will not gain EXP once they reach their maximum level. To increase the level cap, you will have to gather the stars by completing the stages.

Once you earn 100 stars in the game, you will be able to use awaken and combine feature. These features allow you to increase the strength of warriors or stats of warriors by a massive amount. Go to the warrior screen -> tap the warrior -> awaken -> select the material(other warriors). Keep in mind that warriors used as the material(for awakening) will disappear.

Once you gain 200 stars, hard mode and this feature get unlocked. It is used to raise the grade of warriors.

In WhamBam Warriors game, you can obtain weapons by playing the stage mode or Coliseum mode. To equip the weapon, go to the warrior menu -> tap the warrior -> weapons -> choose a weapon -> equip. Depending on the stats of weapons, your attack or HP will increase.

As stated above, in WhamBam Warriors game, you can not deploy all the units at a time. In the battle or dungeon or match, at the top-right corner, you can check the number of green gems. Deploying a warrior costs you battle gems.

Additionally, you can not exceed the deck cost. You can check the battle gem cost of each warrior at its portrait.

As you know, we can deploy the warriors from a specific entrance. But if the monsters are behind the dungeon’s gate, then you will have to open it first. Look for the buttons. For instance; to unlock the purple gate, press the purple button. When a warrior passes through this button, it gets pressed.

How to recruit warriors or obtain new warriors?

You can use gems or ticket or gold to recruit the warriors. Go to the main screen of the game, tap the shop option at the bottom-left of the screen, head to the recruit tab and there you can see all the available options. Head to the normal to get warriors for gold. But gold summoning is not the best way to obtain high-quality warriors. Save gems and go for premium summon. Also, see – Top new Android games

#1.) Don’t Develop All The Warriors

In WhamBam Warriors game, we can select up to 8 characters. So we would recommend you to focus on the best warriors. How to figure out the best characters?

Check out the guide above to know how to increase the strength of warriors.

Similar to warriors, enemies are also classified into three classes; fighters, lancers, and bruisers. Here’s how to take class advantage: –

Before you deploy the warrior, check the enemy class and deploy a strong class character. For instance; the enemy’s class is Lancer. So if you deploy bruiser class warrior, then the character will deal bonus damage.

Don’t deploy the warrior without analyzing the dungeon. Here are some tips to use: –

#4.) Use Of Command Flag & Speed Booster

As a newbie, the game will reward you these consumables; command flag and the speed booster. Command Flag is used to force the warrior to go to a specific direction. For instance; in most of the stages, you get the quest to collect the treasure chest. But since warriors move freely, they may not go to the direction where the treasure chest is. Tap the command flag icon and place at the right place(make sure the warrior is in the range). Once done, tap the flag that you just placed. Speed Booster increases the speed of warriors.

#5.) Complete All The Missions For 3-Stars

Make sure to check all the missions before you start the battle. Complete all the objectives to obtain 3-stars. These stars are used to unlock new features & regions. At the top menu, tap the(i) icon close to the star to check the status.

Some warriors have a leader skill. You can check it by tapping the warrior icon from the warrior menu. Place these warriors on the first slot of the deck to get the advantage.

#7.) Repeat The Stages For EXP

If you get stuck on a level, it would be better to step back and repeat the old stages. Your team members earn EXP when you get the victory. Level Up them and increase their power. If already on maximum level, then make sure to equip a high-quality weapon, use the transcend or awaken feature.

#8.) Recruit The Warriors In Exchange For Gold

Normal Recruiting is one of the best ways to obtain low-quality warriors. You can use these warriors as a material to level-up, awake.

Don’t forget to collect the chest every 24 hours. Complete the quests to get free rewards. Play Coliseum mode and fill the courage gauge to draw free items. Tap the bookcase option and there you can see the list of all the warriors. When you complete the set of warriors, you get a free special warrior. Sell useless items.

So these are few basic WhamBam Warriors tips, cheats & a strategy guide for the beginners. Also, see – Best adventure games for Android