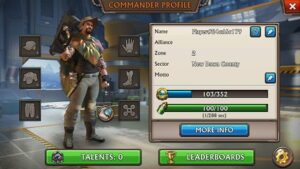 Dino War is a new strategy game for Android by KingsGroup Holdings for Android devices. In this game, you manage your own base, raid on other players’ base, research, trade, and there are plenty of things to do. Check out our Dino War guide and Dino War tips, cheats to progress fast and top the leaderboard

Dino War is a great strategy game for Android. Its gameplay is similar to Mafia City game and all you need to is increase the battle power, upgrade buildings, defense, and raid on other player’s base. In this post, we have covered everything about the Dino War game; Dino War guide, Dino War tips & cheats. Let’s start the Dino War Guide first; 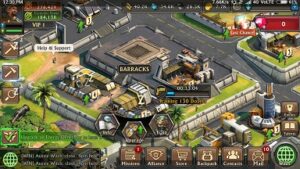 As usual, Dino War game starts with a tutorial in which you learn about the basic of the game; how to play Dino War, about upgrading, materials, production, research, march, and much more. Once the tutorial ends, you can manually play the game as you want.

The Basic: – In this game, your objective is to expand your base and make it strong enough to prevent other players from looting your resources.

⇒ To get the victory or for the successful attack, you need to upgrade your troops and increase the battle power.

⇒ To protect your precious resources from other players, you have to improve the base’s defense.

What did we learn so far?

In this part, we will talk about the buildings; there are lots of buildings you have to take care of in Dino War game. 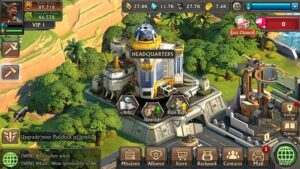 Headquarters is the main building of your base you can not upgrade other buildings beyond its level. At the beginning of the game, few buildings are locked and to unlock these buildings, the player has to the level-up headquarters building. Upgrading this main center unlocks new upgrades and buildings. And additionally, it increases the march capacity. To upgrade, you have to complete the requirements; wall level, a specific amount of gold. Upgrading rewards;

Radar Station is one of the important buildings in Dino War game. It detects incoming marches or recons(if the enemy is approaching to steal the resources). Upgrade the radar station to increase your recon and recon camo abilities. What is recon? To check opponent’s base’s defense level.

At these centers, you can train your troops; shooters, sharpshooters, blasters, and many more. Upgrade these centers to unlock new troops, increase the defense power, and battle power. 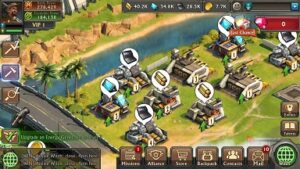 As mentioned above, in Dino War, resources such as ammo, gold coins, material, energy, and more are very important. These items used in upgrading and constructing the buildings. Upgrade these production buildings to increase the production of resources.

Trading is the common task in Dino War game. Go to trading post/hub and from there you can buy & sell goods with other commanders in exchange for diamonds. To buy, head to the buy section -> choose an item and confirm. To sell, go to the sell tab and choose the item you want to sell and tap on the list button.

⇒ Upgrade the trade warehouse to increase the number of goods you can list each time at the trading post.

It is another one of the main buildings in Dino War where you can unlock amazing tech abilities to enhance the general’s skills, improve the battle performance, and economic operations.

At this building, you can assemble and insert plugins to make the beasts more powerful. You can obtain beast plugins free from intel post or as the reward. To unlock more powerful beasts, upgrade the beast compound building.

⇒To invade, tap on the wilds icon at the bottom-right corner[on the main screen], choose a base and continue. 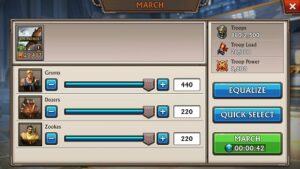 This game is all about upgrading and increasing the battle power and economic power. Use these Dino War tips, cheats to progress fast;

So these are some basic Dino War tips, cheats for the beginners. Download the game – Here[Google Play Store]. Also, see – Top best strategy games for Android